Alan Marron is back to preview day 2 of the York Ebor Festival.

We struggled to hit the target on Day One but we are back for Day Two and we have plenty of strong chances hopefully ready to do the business.

We seen two exceptional performances,  first from Pyledriver trained by William Muir and ridden by Martin Dwyer and then Ghaiyyath proved his doubters wrong by putting in a dominant display under William Buick for Godolphin and Charlie Appleby.

Ground conditions could get interesting over the coming days with plenty of rain around.

Day Two is another fascinating card and you can catch all the action live in your local Bar One Racing Shop. Call in and check out all the offers and specials we have available throughout the week.

On the basis of the form it showed on debut SETARHE was made favourite for the Albany at Royal Ascot and was ultimately no match for Dandalla in the end.

Since then she has run twice and slightly regressed giving the fact that she finished third to Fev Rover and then weakened close home in the Sweet Solera at Newmarket behind Star Of Emaraaty last time out.

I am willing to give her another chance to prove there was no fluke behind the debut success. She is likely to be a big price but it wouldn’t surprise me if she returned to form and went very close.

York could suit her perfectly and hopefully she will travel and see her race out well.

While Devious Company deserves to land a nice pot for his consistency this season the Marco Botti trained APRES DARK impressed me on its debut at Newmarket when it took a while for the penny to drop and despite being green throughout he won going away in impressive fashion.

He then went to Wolverhampton and looked as if he was still learning travelling well and running on without troubling the leaders. He strikes me as a horse with plenty of ability who will improve off the back of a couple of runs.

This big field could really suit him as we will travel and get into a rhythm and now that he is back on grass he could finish his race out better.

He will be a solid each way price in a competitive event and could go close given luck in running.

This race is all about TOP RANK and he will be one of my best bets of the four day meeting.

This horse is unbeaten in four starts and looks a Group horse in the making. He puts his races to bed with the minimum of fuss and could do the exact same here. He had numerous big race entries before his run at Thirsk last time out but connections went for the confidence boosting victory and he couldn’t have been anymore impressive.

He quickened away in the style of a very good horse and I cant wait to see him take his place here. The handicapper has put him up twenty pounds for his recent handicap victories but I still think there is plenty more to come.

If you watch the race from Thirsk last time out it was the ease in which he put the race to bed that impressed me. The turn of foot was electric and the race was over.

My overly bullish comments will need to be justified on the track but if he turns up like his previous two runs then he will take the world of beating.

While this race is centred around another victory for the 1000 Guineas and Epsom Oaks heroine Love there is likely to be plenty of value in the betting without market.

Even though MANUELA DE VEGA has to give away weight to the rest of the field she could be the one to chase home the likely favourite. She really impressed me last time out at Haydock and deserves the step up in grade here. She is likely to be the pace angle in the race and could have her own way up front and set the fractions.

If the ground was to soften that would really increase her chance but I would be happy for a small play without Love as she has plenty of stamina and could give the favourite the most to think about.

ALBAFLORA returns to the scene of her Musidora second from last time out and she looks to be one of the main protagonists in this race.

Rossa Ryan gave her a very educational ride on debut where she stayed on very strongly close home at Haydock to beat Casting Vote. She improved plenty for that run when getting slightly outpaced in the Musidora before staying on again near the finish behind a very consistent Rose Of Kildare.

She steps up another furlong here and that will hopefully see her in a better light. She looks a filly with plenty of stamina and while the others are coming to the end of their tether she will hopefully be staying on strongly.

She is a solid each way chance here and will be hard to keep out of the frame. 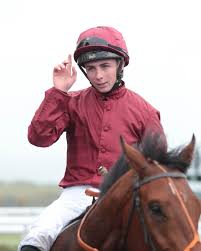 Will it be all smiles for Rossa Ryan aboard Albaflora?

The Andrew Balding trained BONNYRIGG is a very interesting runner with Oisin Murphy getting down to 8-6 to ride here.

That would be one of the lowest weights he has done and it looks noteworthy that he is doing so. If the ground was to come up slightly softer then that wouldn’t inconvenience this horse has he finished second on debut behind Jimmy Sparks on good to soft.

He then broke his maiden with a strong stamina laden victory when he got outpaced and stayed on strongly to lead in the dying strides at Newmarket last time out.

He looks one of the main contenders here with improvement to come and should be hard to keep out of the frame.

Oisin Murphy gets down to 8-6 to ride Bonnyrigg, that has to say plenty about this horses chances.

Julie Camacho has her team in flying form this season and could land a nice victory here with LORTON who will look to improve off the back of her first run of the season.

Her mark of 80 should see her very competitive here as she has been placed off higher marks in the past. She would prefer a little bit of juice in the ground and she will likely get that with plenty of rain forecast.

She is an all weather winner off this mark back in March and if she can produce something similar she should go close. She looks overpriced to me and she is one of the fillies in this handicap I will be keeping a very close eye on.

Market moves will likely tell more close to race time so keep a close eye on it.