Alan Marron is back with another of his popular Trainer Interviews

It is not every day you encounter someone who travelled from just outside of Milan in Italy to Banbridge in Northern Ireland in order to follow their dream. But that is exactly the route taken by Natalia Lupini.

That experience led, with full support from her parents, to pony club and summers spent in big training yards. She then worked in a yard in Armagh, looking after hunters.

Having graduated with a degree in psychology, the road then led Natalia, in 2014, to taking out a trainer’s licence and her first winner came early in 2016 (see Q&A below).

Sending out eight more winners in Ireland since then from a small number of horses will get you noticed, not least when they happen on big days, which was exactly the case with Blairmayne, who won on Tattersalls 2,000 Guineas day at The Curragh in May 2019.

Since then, Natalia, who is still in her twenties, has seen her stable numbers nearly double, which speaks well of her achievements thus far and augurs well for the future.

Once again, I have been fascinated by the backstory that accompanies these pieces and through discovering more about the personalities involved and their approaches to training. Not least for this, I would like to thank Natalia for taking the time to answer my questions and I wish her every success for the future.

**A ricksteves.com video of the 2019 ‘Palio’ has been included at the end of this piece.

NATALIA LUPINI TRAINER Q AND A

Where are you based? JUST OUTSIDE BANBRIDGE IN COUNTY DOWN.

What was your first job in racing? I STARTED IN RACING IN IRELAND IN 2012 CARRYING OUT GENERAL YARD DUTIES.

When did you decide you wanted to train racehorses? IT HAS ALWAYS BEEN MY DREAM BUT, SOON AFTER MY FIRST RACEHORSE, ABSTRACTION (A HORSE NATALIA PURCHASED FROM THE GORESBRIDGE BREEZE-UPS IN 2012), HAD BEEN SUCCESSFUL, I DECIDED THAT’S WHAT I WANTED TO DO FOR SURE.

How long is a normal working day? AT THE MOMENT WE ARE VERY BUSY, SO FROM SEVEN IN THE MORNING UNTIL 1.30PM AND THEN EVENING FEED FROM 5 TO 6.30.

How many horses have you in at the minute? WE HAVE 17.

Describe the feeling of your first winner and what horse was it? IT WAS IN 2016 (JANUARY) AND IT WAS ALNAHAR IN DUNDALK. IT WAS A GREAT FEELING AS WE HAD A VERY SLOW START AS HORSES CAUGHT A VIRUS THE YEAR AFTER WE STARTED SO IT WAS A VERY BAD YEAR. THAT WIN FELT LIKE EVERYTHING WAS FINALLY FALLING INTO PLACE.

What was your most memorable winner? I SHOULD SAY BLAIRMAYNE  ON GUINEAS WEEKEND (MAY 2019, IN THE HERITAGE HOTEL & SPA HANDICAP, ONE OF 5 RACES THAT HE HAS WON) BUT MY HEART SAYS ABSTRACTION WINNING AT DOWN ROYAL LAST YEAR, AFTER A VERY LONG TIME, UNDER SHANE FOLEY, WHO ALWAYS BELIEVED IN HIM. 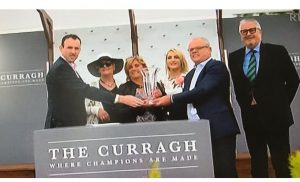 How do you deal with a dip in form of the horses? IF THERE IS A DIP IN FORM THEN WE GET THEM BLOOD TESTED AND WORK FROM THERE. IF THEY ARE HEALTHY AND SOUND AND STILL NOT RUNNING UP TO FORM THEN IT WOULD SUGGEST IT IS A MENTAL ISSUE SO THEY WILL GET A BREAK IN THE FIELD AND START BACK WHENEVER THEY ARE READY.

You mentioned Blairmayne: how is he doing? And would you have a horse for our readers to follow this season? BLAIRMAYNE IS DOING VERY WELL AND WE’RE LOOKING FORWARD TO SEEING HIM BACK ON THE TRACK THIS SEASON. A HORSE TO WATCH OUT FOR THIS SEASON, ALL BEING WELL, WILL BE ARNHEM (LIGHTLY RACED – JUST 5 RUNS SO FAR – HE FINISHED SECOND IN A DUNDALK MAIDEN IN DEC 2019 AND FOLLOWED IT UP WITH A VERY GOOD FIFTH OF 15 IN A NAAS MAIDEN), ALONG WITH A FEW OTHER SPRINTERS LIKE ANNABELLE ROCK (A FAIRLY RECENT ACQUISITION) AND TY ROCK BRANDY (WHO WON ON HER SECOND START FOR THE STABLE IN OCT 2019).

What is your favourite racecourse? LEOPARDSTOWN. THE SUMMER EVENINGS ARE ALWAYS GREAT HERE BUT THIS YEAR IT WILL BE A BIT DIFFERENT UNDER THE CURENT CIRCUMSTANCES. OUR LOCAL TRACK, DOWN ROYAL, ALWAYS ATTRACTS A GOOD CROWD AND THE ACTUAL TRACK IS LOVELY.

Toughest course to train a winner?  BELLEWSTOWN – I’VE NEVER BEEN LUCKY THERE. HAVE GONE VERY CLOSE A FEW TIMES BUT NEVER WON.

Is social media something your training establishment uses a lot? IN THE NORM, WE LIKE SHARING A FEW PICTURES OF THE HORSES AND MOMENTS IN THE YARD AND NOW, WITH RACING BACK, WE WILL LOOK TO UPDATE MORE OFTEN.

How much of a benefit to your yard is Dundalk during the year and especially in the winter months? IT IS VERY GOOD FOR US AND EVERY YEAR WE WISH THERE WAS MORE RACING THERE.

With your Italian background do you bring any of it into your training regime? NO, NOT REALLY. I THINK IN IRELAND WE HAVE SOME OF THE BEST HORSEMEN IN THE WORLD SO I WOULD ALWAYS LISTEN AND READ THEIR INTERVIEWS AS MUCH AS I CAN. I TAKE ADVICE AND LISTEN TO PEOPLE WHO I HAVE GREAT RESPECT FOR. THAT WAY YOU CAN LEARN SOMETHING EVERY DAY.

If you weren’t  a trainer what would you be doing now? I WOULD HAVE FOLLOWED THE PSYCHOLOGY PATH AND PROBABLY RESEARCH. IT IS SOMETHING I STILL LIKE TO READ ABOUT AND IT REALLY INTERESTS ME.

If you could train one horse what would it be? STRADIVARIUS. HE HAS GOT PLENTY OF CLASS AND IS REALLY TOUGH.

What is your favourite food? PIZZA – THE REAL ITALIAN ONE THOUGH!

What are your hobbies outside of racing? ART EXHIBITIONS, TRAVELLING AND EATING GOOD FOOD AND HAVING SOME GOOD DRINKS.

What would you like to own that you don’t have already? THERE ARE LOTS OF THINGS THAT I WOULD LIKE BUT I AM HAPPY AT THE MOMENT AND I WILL KEEP WORKING TOWARDS REACHING THEM.