Alan Marron is back to preview a cracking card at the Curragh on Friday.

The Curragh host a very good meeting on Friday and we back with another in depth full card preview.

We have the Irish Cambridgeshire as the feature of the day along with three very classy Group Three races.

You can catch all the action live in your local Bar One Racing shop so make sure you call in and avail of the offers and specials that we have throughout the day.

Ger Lyons and Colin Keane are having a very good season and look to have a very good chance with the Khalid Abdullah owned COLOUR SERGEANT. This horse has progressed with three runs so far and should finally break his maiden tag here. His second run has worked out extremely well as Mac Swiney who won the race that day went on and landed the Group Two Futurity Stakes at the Curragh last Saturday.

Colour Sergeant stayed on very strongly over seven furlongs in his last two runs so the step up to a mile looks sure to suit. His only danger looks to be the Aidan O’Brien trained Brazil but the fact that the Ballydoyle supremo has opted for blinkers looks to be a negative for me.

Colour Sergeant has the form in the book and should be very hard to beat here.

Colour Sergeant could get the Ger Lyons team off to a flyer on a cracking Curragh card.

EMANIYA improved off a very eyecatching debut at the Curragh when she landed a maiden in Cork in impressive fashion. She was travelling well inside the final two furlongs and put the race to bed with a minimum of fuss. She looked value for more than the winning margin and she looks one of the main protagonists should she improve again.

Ahandfullofsummers and Divinely who finished behind her last time reoppose again and look to have it all to do to overturn the form. Emaniya is the type that will likely improve for a longer trip in time but she impressed me last time out and I think she will be hard to keep out of the frame here.

While Albigna takes a big drop in grade and will take all the beating here, the Aidan O’Brien trained filly LOVELIER is an improving filly and could give her plenty to think about. This filly broke her maiden at Killarney in July when she stayed on strongly in the closing stages to get up and beat Albignas stablemate Celestial Object.

She backed that run up with a very good run in the Kilboy Estate Stakes Group Two when she finished second to the Ger Lyons trained Lemista. All her best work was done in the closing stages and she looks a filly who will improve for a step up in trip over time.

There is plenty of speed in her pedigree being by Laddies Poker Two but the stamina is there also and she will be hard to keep out of the frame.

While it will take a massive performance from a maiden to break his duck in a handicap of this nature, the Jim Bolger trained AGITARE could be poised for a big run after finishing second last time out when he was well clear and got caught close home.

His race from last time out will be remembered for a long time  in Irish flat racing history for the biggest price SP as the winner retured 300/1. That was Agitares first run since a gelding operation and if he can improve off the back of that run I can see him going very close here. If you delve into his form you will see that he finished second behind Cormorant in a maiden who went on to win the Derrinstown Stud Derby Trial at Leopardstown. He also has a third to Mogul who won the Gordon Stakes at Goodwood and was well fancied for the Epsom Derby where he finished sixth behind Serpentine.

A handicap mark of 97 could just underestimate Agitares actual ability and it could take the bunched field around the Curragh to see him in a better light. With luck in running he should go very close here and it would be a nice pot to land on the way to breaking your maiden tag.

Ken Condon has his team in flying form this season and TERESA MENDOZA is his representative here and was very impressive on debut over course and distance. The second horse Monaasib has franked the form by winning twice since and on the second occasion done it nicely. Artician was strongly fancied and Monaasib put him in his place nicely. His last run was very good also when he finished second to Chief Little Hawk in the Ballyhane at Naas on Sunday last.

Teresa Mendoza travelled supremely well on debut and picked up in the style of a very good filly. If she can come on for that run she looks to be a very exciting prospect. She will get a weight allowance from the colts in the race and that could be enough to see her home in front. Shane Foley was hands and heels on her last time out in the closing stages and she won the race very easily. She looks a filly with a huge future and will go very close here.

Natalia Lupini who was recently involved in a trainer Q and A with us on the website has an old favourite of mine entered here and I think he will go very close. BLAIRMAYNE has won twice at the Curragh in recent seasons and looks reasonably weighted off a mark of 83 as he got absolutely no run at Naas last time out and looked very unlucky. Shane Foley has a very good rapport with this horse and there is no doubt that Natalia will have him in top form.

In terms of form he has some very strong form in better handicaps than this and it actually looks like a drop in grade here. He finished fifth in an 81k handicap only beaten three lengths and was then third in a 38k handicap at the Curragh behind Romantic Proposal trained by Eddie Lynam.

With luck in running here he will be extremely hard to beat and would be one of the bets of the day for me. 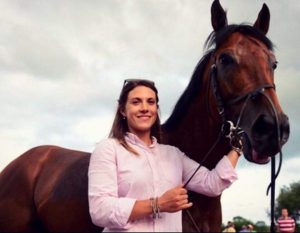 Blairmayne is one of the stable favourites and a great servant for Raintree Racing, Can he land another nice pot?

CURSORY EXAM caught my eye when finishing fourth behind the Aidan O’Brien trained Hudson River in what proved to be a very strong maiden. The third horse that day Wembley has won since and the fifth Mac Swiney went and won the Group Two Futurity Stakes last weekend as mentioned earlier.

This doesn’t look an extremely strong handicap and with cheekpieces applied for the first time I would expect Cursory Exam to go very close. His run at Galway last time out can be ignored as I dont think he handle the undulations whatsoever. His mark of 79 doesn’t look overly excessive and I would expect a big run.

This may be somewhat of a shot in the dark but the Gerard Keane trained TREBLE CONE could be one to pay plenty of attention to as he looks nicely handicapped as he won off a mark of 64 at Leopardstown in May 2019 and gets in here off a mark of 61 and John Shinnick claiming four pound.

This is his second run of the season after he returned at the Curragh last time out off the back of a 55 day break. He was just over six lengths off the winner that day in Roving Mission and he should strip much fitter here second time around. I would keep a close eye on any market moves as expectations may be heightened if money was to arrive for this horse overnight.

He looks a live each way possibility here and should be hard to keep out of the frame.