Alan Marron is back with another of his popular Trainer Interview

Leaving the successful and secure surroundings of Gordon Elliott’s top-class training facility in County Meath to set up on your own is a big step, but that is exactly what Olly Murphy did in 2017.

Everyone at Gordon’s was sad to see him leave, although he departed with their good wishes for the future. Olly then had a winner with his very first runner, Dove Mountain on July 4th 2017 at Brighton, who, rather appropriately, was formerly trained by Gordon.

A winner with your first runner, one that was owned by the Olly Murphy Racing Club, was an excellent way to announce yourself and, since then, he has gone on to land 196 winners over jumps in Britain and a further 20 on the flat. That’s some going in just one month short of three years.

Eye-catching successes include Hunters Call (ridden by Jack Kennedy) in a Grade 3 hurdle at Ascot in Dec 2017, Calipso Collonges (who won on his first four starts for Olly in Feb/Mar 2018), Thomas Darby (a Grade 3 winner at Ascot in January, ridden by Richard Johnson), Itchy Feet (winner of the Grade 1 Scilly Isles Novices’ Chase at Sandown in Feb, ridden by Gavin Sheehan; he also won a Listed hurdle in Oct 2018), four-time winner Brewin’upastorm, and Yensir (4 wins from 7 starts in 2018).

Olly’s first season saw at least one win for 30 different horses in his stable, with that number rising to 46 in his second. It comes as no surprise then to learn that he will have well over 100 horses in his yard when the jumping season resumes in Britain this year.

It is a success story that is really only in its infancy and the future looks bright for Olly and his team.

I would like to thank Olly for taking time out to answer my questions and, in turn, wish him all the very best for the future.

Where are you based? WE ARE BASED IN WILMCOTE, STRATFORD-UPON-AVON, IN THE HEART OF WARWICKSHIRE.

What was your first job in racing ? MY FIRST PART-TIME JOB WAS RIDING OUT FOR PHILIP HOBBS IN MY EARLY TEENS; MY FIRST FULL-TIME JOB WAS FOR ALAN KING AGED 16.

When did you decide you wanted to train racehorses? I RODE A WINNER POINT-TO-POINTING AT UPPER SAPEY (IN HEREFORDSHIRE). I HAD TO TAKE MY IRONS AND GIRTHS OFF TO WEIGH IN AND THOUGHT ENOUGH WAS ENOUGH AS I WAS GETTING HEAVY! I THEN GOT AN UNBELIEVABLE JOB WITH GORDON ELLIOTT.

How long is your normal working day? WE ARE 7AM TILL 4.30PM. I ENJOY DOING MY RACE PLANNING LATE AT NIGHT, WEIRDLY, WHEN I’M IN BED.

How many horses have you in at the minute and are you still dual-purpose training or primarily jumps now? WE ARE PRIMARILY JUMPS, BUT I’VE A DOZEN FOR THE FLAT THIS SUMMER. WE HAVE 40 IN NOW AND WE WILL HAVE 120 IN FOR THE COMING SEASON, ALL BEING WELL.

Describe the feeling of your first winner as a trainer and what horse was it? DOVE MOUNTAIN AT BRIGHTON. IT WAS THE BEST FEELING I’VE HAD TO DATE. IT FELT I HAD THE WEIGHT OF THE WORLD ON MY SHOULDERS AND HAVING MY FIRST WINNER WITH MY FIRST RUNNER WAS VERY SPECIAL.

What was your most memorable winner? PROBABLY MY FIRST WINNER, ALTHOUGH TRAINING MY FIRST GRADE ONE WAS VERY SPECIAL. MY MUM AND DAD WERE PRESENT, MY BEST FRIEND, AS WAS MY ASSISTANT, GERARD TUMELTY, WHO HAS ALSO BEEN A VERY GOOD FRIEND FOR A LONG TIME. 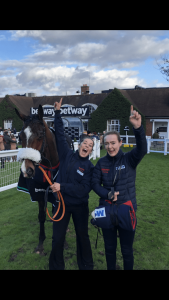 How do you deal with dips in form of the horses; would your training regime ever change? NO, NEVER CHANGE WHAT YOU KNOW WORKS. EVEN THROUGH A TOUGH TIME. IF HORSES ARE NOT WELL, BACK OFF THEIR WORK AND THEY TEND TO COME BACK TO THEMSELVES. I’M A WINNER. I HATE NOT TRAINING WINNERS SO IT HURTS.

One horse to follow when we get back in action: GOOD QUESTION. TWO HORSES FOR THE SUMMER – SANGHA RIVER AND ENEMY COAST AHEAD. NICHOLSON WOULD BE ONE FOR THE WINTER.

What would your favourite racecourse be? I LOVE BOTH MY LOCAL TRACKS, WARWICK AND STRATFORD. MARKET RASEN AND FAKENHAM ARE VERY LUCKY FOR ME.

Toughest course at which to train a winner?  NEWBURY, YOU HAVE TO BE VERY GOOD TO WIN THERE, AN ORDINARY HORSE GETS A VERY HARD RACE THERE.

Is social media something that your training establishment would use a lot? YES, ITS SOMETHING THAT WE ARE KEEN ON. I’M RELATIVELY YOUNG AND IT’S A GOOD WAY TO SHOW OFF YOURSELF AND YOUR FACILITIES.

You mentioned working fot Alan King and I notice Brian Meehan as well, if i’m correct; what key thing did you take with you from the way they did things? BOTH  VERY PROFESSIONAL PEOPLE. I HAD AN UNBELIEVABLE TIME AT ALAN KING’S. I RESPECT HIM AN AWFUL LOT AND SPEAK TO HIM ON THE PHONE STILL.

Gordon Elliott’s stable must have been a great place to be; have you adopted any of his training methods or are they mainly your own? NO, I HAVENT CHANGED A THING. HOW I TRAIN MY HORSES IS VERY SIMILAR TO GORDON. I’VE THE SAME SAME GALLOP, RUGS AND EVEN FEED. HE WAS AN UNBELIEVABLE MAN TO WORK FOR.

Was there one horse at Gordon’s that made things very special to be there? DON COSSACK NEVER GOT TO ACHIEVE WHAT HE WOULD HAVE, EVEN THOUGH HE WON THE GOLD CUP. HE WAS THE ULTIMATE RACEHORSE.

If you weren’t a trainer what would you be doing now? I AM FOOTBALL MAD, BUT I WASN’T GOOD ENOUGH TO PLAY PROFESSIONALLY. I WOULD STILL BE WORKING FOR GORDON.

If you could train one horse what would it be? I THINK ENVOI ALLEN HAS IT ALL; SHISHKIN WOULDN’T BE TOO FAR BEHIND.

Hobbies outside of racing? I’M AN AVID ASTON VILLA FAN, AND I LOVE SPORT IN GENERAL

What would you like to own that you don’t have already? NEW FACILITIES. YOU CAN NEVER STOP IMPROVING EVEN THOUGH I THINK WE HAVE SOME OF THE BEST FACILITIES IN THE COUNTRY.

Earlier Trainer Interviews can be accessed by clicking on the links below: