Following on from his recent popular Jockey Q&As, Alan Marron now turns his attention to the trainers

Tom set up as a trainer in the 2012/2013 season and, from a relatively small base of around 30 horses, has maintained an impressive winning strike-rate of close to 20%.

Aside from six-time winner Kimberlite Candy, horses like Jester Jet (a Grade 3 and Listed winner), Thomas Patrick (Grade 3), Tea Clipper, Glory And Fortune (Listed winner) and Sebastopol have won 18 races between them for the stable over the last four seasons, campaigns that have produced 118 winners in total. This is evidently a stable that is producing year-on-year improvement.

Kimberlite Candy, Tea Clipper and Sebastopol are examples of horses that were winners for Tom’s wife Sophie on the point-to-point circuit. The Laceys have proven themselves skilled at identifying and then developing young horses. From a long list, the successful family operation has also produced such horses as Grade 2 bumper winner Blackbow for Willie Mullins and Grade 2 and 3 winner North Hill Harvey for Dan Skelton.

Given his background and experience in the sport, it is no surprise to see success coming his way. He is, in essence, a horseman, with skills learned and developed under the tutelage of Captain Charles Radclyffe, whose name is synonymous in racing history with the preparation of horses, not least when it comes to jumping.

Reference was made to the captain by Henrietta Knight in her recent book, How Trainers Work And What Makes Them Tick. Captain Radclyffe was renowned for his loose-jumping school and, we were reminded by Henrietta, sharpened up many horses for all-time great trainers Fred Winter and Fulke Walwyn and regularly prepared horses for the Queen Mother.

Henrietta also mentioned that six-time British champion jumps trainer Nicky Henderson is an advocate of this way of training horses to jump. Tom has continued this practice and it is hardly surprising that his horses, being so well schooled, rarely fall.

As you will be able to tell from one of the pictures below, Tom’s stables and gallops are set in a beautiful part of the world. His facilities include a deep-sand gallop (as described in the Q&A) and a stream used for cooling horses’ legs and tendons after exercise. That last sentence could have been used to describe key parts of Ireland’s 14-time champion jumps trainer Willie Mullins’ operation, not that collaboration or copying from either side has taken place!

Tom also has a background in selling feed and food supplements to leading trainers, so another key element to being able produce horses at their healthiest and best comes into play.

With horses such as Tea Clipper, Sebastopol, Kimberlite Candy, Glory And Fortune and, also, Adrimel, just a five year-old and a May foal who won his first three bumpers last season and then ran in the Champion Bumper at the Cheltenham Festival, all set to represent him next season, the chances are that Tom Lacey will be catching our eye for a long time to come.

WHERE ARE YOU BASED?

WHAT WAS YOUR FIRST JOB IN RACING?

WHEN DID YOU DECIDE YOU WANTED TO TRAIN RACEHORSES?

IT EVOLVED RATHER THAN MAKING A CONSCIOUS DECISION.

HOW LONG IS YOUR NORMAL WORKING DAY?

I AM IN MY OFFICE AT 4.45 AM AND SELDOM FINISH UP BEFORE 6.30PM. I WOULD NEARLY ALWAYS GO RACING IF WE HAVE A RUNNER.

HOW MANY HORSES HAVE YOU IN AT THE MINUTE?

WE HAVE ELEVEN SUMMER JUMPERS IN AT THE MINUTE.

DESCRIBE THE FEELING OF YOUR FIRST WINNER AND WHAT HORSE WAS IT?

I WAS, NATURALLY, DELIGHTED; IT WAS TROUBLE DIGGER AT LINGFIELD ON THE 27TH FEBRUARY 2013.

THOMAS PATRICK WAS PULLING UP IN ENGLISH POINT-TO-POINTS WHEN I GOT HIM AND HE WENT ON TO WIN A GRADE THREE AT THE AINTREE FESTIVAL.

HOW DO YOU DEAL WITH DIPS IN FORM OF THE HORSES?

DESPERATELY: I BEAT MYSELF UP AN AWFUL LOT.

ONE HORSE TO FOLLOW WHEN WE GET BACK INTO ACTION: 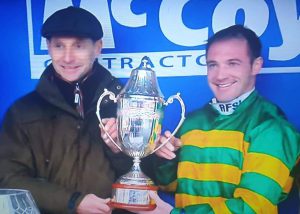 TOUGHEST COURSE TO TRAIN A WINNER:

IS SOCIAL MEDIA SOMETHING YOUR TRAINING ESTABLISHMENT USES A LOT?

NO, BUT WE ARE EMPLOYING MORE HELP THIS YEAR TO ENHANCE THE OWNERSHIP EXPERIENCE WITH MORE VIDEOS AND UPDATES ON HORSES.

IN TERMS OF YOUR GALLOP, IS IT DEEP SAND OR WHAT TYPE DO YOU USE?

WE HAVE A TWO-FURLONG DEEP SAND CIRCLE AND A FOUR-FURLONG WOODCHIP HILL GALLOP.

HAVE YOU ADOPTED ANY OF YOUR TRAINING REGIME FROM TRAINERS YOU MAY HAVE WORKED WITH PREVIOUSLY?

NOT REALLY AS I HAVEN’T WORKED FOR A TRAINER FOR TWENTY FIVE YEARS AND THINGS HAVE MOVED ON SO MUCH. I’VE CERTAINLY MAINTAINED THE HIGH STANDARDS THAT THE CAPTAIN INGRAINED IN HIS PUPILS.

IF YOU COULD TRAIN ONE HORSE, WHAT WOULD IT BE?

IF YOU WEREN’T A TRAINER, WHAT DO YOU THINK YOU WOULD BE DOING NOW?

I STARTED AND COMPLETED EXAMS FOR SOME LOSS ADJUSTING.

HOBBIES OUTSIDE OF RACING:

WHAT WOULD YOU LIKE TO OWN THAT YOU DONT HAVE ALREADY? 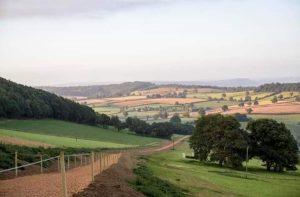 A view of Tom’s impressive training facility in Herefordshire

The Chris Hayes interview can be found via this link

The Nick Scolfield interview can be found via this link

The Danny McMenamin interview can be found via this link