His name sounds Welsh but Nathan Evans is, in fact, from Northern Ireland. He is from a show jumping background, but that has been the springboard to success for many jockeys, including one of the best ever, John Francome, and top-class Robbie Power.

At just 22 years of age, Nathan now rides as stable jockey to Michael, or Mick, Easterby. This is a huge accolade because Mick is part of a tremendous family racing dynasty in Yorkshire. His brother, Peter, was a hugely successful trainer and his nephew, Tim, has carried on the family tradition in great style, his wins including the Group 1 Haydock Sprint Cup in 2000 with Pipalong and in 2003 with Somnus and the English St Leger with Bollin Eric in 2002.

Peter was champion trainer over jumps in Britain three times and trained over 1,000 winners on the flat and over jumps (he is the only British trainer to have achieved this). He can list Cheltenham Gold Cups, Champion Hurdles, Chester Cups and an Ebor among his successes with horses such as Little Owl, Alverton, Night Nurse and Sea Pigeon.

Mick, too, runs a very successful operation. He won the English 1,000 Guineas in 1977 with Mrs McArdy and enjoyed top-class success with the sprinter Lochnager in 1976 when he won the King’s Stand Stakes, the July Cup and the Nunthorpe Stakes. He has also had a Cheltenham Festival winner, Peterhof in the 1976 Triumph Hurdle.

Not that he is a stranger to recent big-race success, with Gentleman’s Deal having won the Group 3 Winter Derby in 2007 and Hoof It, who is part-owned by golfer Lee Westwood, winning the Stewards’ Cup at Glorious Goodwood in 2007.

It is joked that Peter and Mick own half of Yorkshire, which bears testimony to their success and how skilled and shrewd they are. In fact, these are bywords for the Easterbys, such is the regard in which they are held.

Incidentally, a cousin of Mick’s, Henry, is the father of Irish Rugby Union internationals Simon and Guy Easterby. Their mother, Catherine, is from Ireland.

No doubt, it is an exciting time for Nathan, who rode his first winner in July 2015 and is now closing in on 200 successes, and he is well positioned for future success.

Again, I am grateful to Nathan for taking the time to answer my questions and I wish him all the very best for the future.

WHERE ARE YOU FROM? MAGHERAFELT, CO. DERRY

HOW DID YOU GET INTO RACING?

I NEVER GREW UP IN THE RACING SCENE BUT DID SHOWJUMPING RIGHT UP UNTIL I WAS 16 AT A VERY COMPETITIVE LEVEL TO THE SJI (SHOWJUMPING IRELAND).

MY DAD OWNS AND RUNS A RIDING SCHOOL BACK HOME SO THERE WERE ALWAYS HORSES THERE GROWING UP. ONCE I TURNED 16 I HAD A CHOICE TO MAKE, EITHER TO GO INTO THE SHOWJUMPING WORLD OR TURN TO SOMETHING ELSE. I WANTED A CHANGE AND ENJOYED SPEED SO MY PARENTS SENT ME DOWN THE RACING ROUTE. WITHIN A WEEK I WAS HEADING OVER TO THE EASTERBYS IN NORTH YORKSHIRE ON A WEEK’S TRIAL. SEVEN YEARS LATER I AM STILL ON THAT WEEK’S TRIAL. I GUESS I HAVE THE JOB.

HOW MUCH OF AN IMPACT HAS MICK EASTERBY HAD ON YOUR CAREER AND WHAT SORT OF A CHARACTER IS HE?

THE BOSS HAS PLAYED A HUGE PART IN MY START AS A JOCKEY. I WOULDN’T BE WHERE I AM NOW WITHOUT HIS HELP. HE HAS PROVIDED ME WITH 105 WINNERS IN LESS THAN FIVE SEASONS AND I CAN’T THANK HIM ENOUGH. HE’S ALWAYS TELLING STORIES AND I’M ALWAYS LEARNING NEW THINGS FROM HIM. HES 89 YEARS-OLD AND THERE CERTAINLY WONT BE ANOTHER ONE LIKE HIM.

JOCKEY YOU IDOLISED GROWING UP?

AP McCOY BECAUSE HIS HOMEPLACE, TOOME BRIDGE, IS ONLY ABOUT TEN MINUTES FROM MY HOME IN IRELAND. IT WAS COOL TO FOLLOW A JUMP JOCKEY.

FAVOURITE RACECOURSE AND WHY?

I WILL HAVE TO SAY YORK, I KNOW IT’S OUR LOCAL TRACK HERE IN NORTH YORKSHIRE, BUT TO RIDE WINNERS THERE IS JUST UNREAL. IT ALWAYS GETS AN OUTSTANDING CROWD AND THE ATMOSPHERE IS OUT OF THIS WORLD THE CLOSER YOU GET TO THE LINE.  I’VE BEEN REALLY LUCKY THERE OVER THE YEARS TO PICK UP A GOOD FEW WINNERS, WHICH DOES HELP, OF COURSE.

THAT’S A HARD ONE. A LOT OF PEOPLE DO SAY GOODWOOD BUT I WOULD HAVE TO SAY RIPON BECAUSE IT IS ONE OF THE MOST UNDULATING TRACKS AND IT TAKES A BIT OF RIDING TO GET IT SPOT ON.

HOW MANY WINNERS HAVE YOU RIDDEN SO FAR?

HORSE THAT YOU LOOK FORWARD TO THIS SEASON:

WHEN WE GET BACK RUNNING, A HORSE THAT I AM LOOKING FORWARD TO RIDING IS A THREE YEAR-OLD CALLED VARDON FLYER. HE IS STILL A MAIDEN BUT HE FINISHED A CLOSE SECOND LAST YEAR IN A FEW NICE RACES. HE IS BIGGER AND BETTER THIS YEAR.

WHAT IS YOUR BIGGEST WIN TO DATE?

EITHER THE GLORIOUS GOODWOOD QATAR STEWARDS’ SPRINT STAKES ON HOOF IT OR THE SCOTTISH SPRINT CUP ON HOOFALONG. 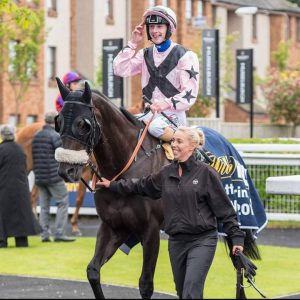 RACE YOU WOULD MOST LIKE TO WIN: THE EBOR

WHAT WOULD YOU LIKE TO OWN THAT YOU DONT HAVE ALREADY? A TRAMPOLINE

HOBBIES OUTSIDE OF RACING: I’VE GOT A COLOURED TROTTING PONY THAT I TAKE OUT EVERY DAY FOR A JOG ON THE CART AFTER RIDING OUT IN THE MORNING.

FOOTBALL TEAM YOU SUPPORT: LIVERPOOL ALL THE WAY, ALTHOUGH I LIKE LEEDS SINCE I’VE COME TO YORKSHIRE