Danny McMenamin rose to prominence when, on just his third ride at the revered venue, he won the valuable Greatwood Hurdle at Cheltenham on Nietzsche for trainer Brian Ellison.

That was in November 2018. Last season was even better, one that  yielded 28 winners at a strike-rate of better than 12.5%, with 40% of his rides earning money for their connections.

Visits to the track associated with where he grew up kindled his love of horse racing. Valuable experience and knowledge were gained with local trainer Brian Hamilton and a move to England then followed and he has been attached to the powerful stable of Nicky Richards at the historic Greystoke Stables in Cumbria, where Nicky’s father Gordon trained before him, since 2017.

An historic and successful stable in a beautiful setting and with a very good season behind him, Danny is well positioned for future success. His ability to ride comfortably at under 10 stone is also undoubtedly an asset.

In keeping with all of the jockeys who have been kind enough to answer my questions, I wish Danny every success for the future.

NB Danny took part in our recent Commentary Challenge, as did jockey Johnny Burke. We have included their excellent commentaries at the end of this Q&A. Earlier Jockey Interviews are included at the bottom of the page.

WHERE ARE YOU FROM? DOWNPATRICK, NORTHERN IRELAND

HOW DID YOU GET INTO RACING? A FAMILY FRIEND, WHO KEPT A COUPLE OF POINT-TO-POINTERS AND THEN I GOT A BUZZ FOR IT AND WENT TO BRIAN HAMILTON, WHO TRAINS POINTERS AND HORSES FOR UNDER RULES.

JOCKEY YOU IDOLISED GROWING UP: RUBY WALSH – THE MAN’S A GENIUS 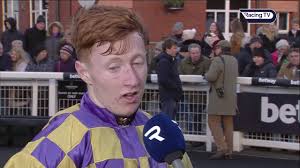 FAVOURITE RACECOURSE AND WHY? CARLISLE BECAUSE ITS ONLY TWENTY MINUTES AWAY FROM US. IT CAN BE TOUGH TO RIDE – TIMING AND JUMPING IS EVERYTHING AROUND THERE.

TOUGHEST COURSE TO RIDE: CARLISLE AGAIN, TO BE HONEST, AS YOU HAVE TO HAVE EVERYTHING RIGHT; THERE’S NO TIME FOR ERRORS AROUND THERE. ITS A STIFF CLIMB UP THE HOME STRAIGHT AND, IF YOU GO TOO SOON, YOU WILL STRUGGLE TO GET HOME.

HOW MANY WINNERS HAVE YOU RIDDEN SO FAR? 45 WINNERS ALTOGETHER

HORSE THAT YOU LOOK FORWARD TO THIS SEASON: NUTS WELL WOULD BE ONE. HE HAD A GREAT SEASON. I WON THREE ON HIM AND HOPE TO RIDE A FEW MORE, WHICH WOULD BE NICE. REALLY, THOUGH, I’M LOOKING FORWARD TO THEM ALL.

RACE YOU WOULD MOST LIKE TO WIN: IT’S BEEN A DREAM OF MINE TO WIN THE GRAND NATIONAL FOR AS LONG AS I CAN REMEMBER.

WHAT WOULD YOU LIKE TO OWN THAT YOU DONT HAVE ALREADY? AN AUDI A3, HOUSE, LAND

HOBBIES OUTSIDE OF RACING: FOOTBALL, ALSO GAELIC FOOTBALL IF I WAS BACK HOME, ANYTHING THAT INVOLVES OUTDOORS REALLY.

PS Bar One Racing recently ran a very enjoyable ‘Commentary Challenge’ based on the2019  Grade 1 BarOneRacing.com Royal Bond Novice Hurdle, which was won by Envoi Allen, who went on to win the Ballymore Novices’ Hurdle at the Cheltenham Festival. We remain grateful to Ireland’s leading commentator, Jerry Hannon, and RacingTV for use of footage from the Royal Bond and, of course, Fairyhouse, whose manager Peter Roe also submitted an entry, where the race is run as part of the Winter Festival.

Danny, along with fellow jockey Johnny Burke, also submitted an entry, which you can hear below. It will hopefully be many years before it becomes a serious option, but Danny has certainly sown the seeds of a second career.