Chris Hayes has long since been recognised as a top-class jockey. What all jockeys want, though, to accompany such recognition is big-race successes to embroider their career CV. These have arrived for Chris in the last few seasons.

They include the 2016 Tattersalls Irish 2,000 Guineas, his second Classic win, on Awtaad for owner Sheikh Hamdan Al Maktoum and trainer Kevin Prendergast. Awtaad also won under Chris at Group 2 level later in the same year.

For the same connections, Chris has won Group 2 and 3 races on Madhmoon and also rode him when he was beaten just half-a-length into second place in last year’s Epsom Derby. The good news is that he has remained in training as a four year-old.

You can add to his list last year’s Group 1 Irish St Leger winner Search For A Song for Moyglare Stud and HH The Aga Khan‘s Group 2 and 3 winner Tarnawa, both of them trained by Dermot Weld. Chris’s first Classic success had also come in the Irish St Leger, in 2013 on Voleuse de Coeurs in the colours of Lady O’Reilly, also for Dermot Weld. 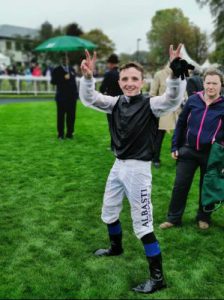 Shortly before that St Leger success, in September 2013, Chris had ridden his first Group 1 winner, which came on La Collina, owned by Joerg Vasicek, for Kevin Prendergast in the Coolmore Fusaichi Pegasus Matron Stakes at Leopardstown.

Another Group winner for Sheikh Hamdan came in the shape of Group 3 scorer Talaayeb at York in 2017 for trainer Owen Burrows. In Ireland, Tom Hogan’s Gordon Lord Byron gave Chris a Group 2 win in the same year, one that also saw him win the valuable Petingo Handicap at Leopardstown on Laws Of Spin for Willie Mullins. Chris had teamed up with Willie to win the Irish Cesarewitch on the same horse the previous year.

2016 and 2017 were also years that saw him achieve back-to-back Ahonoora Handicap wins at the Galway Festival on Dream Walker for Brian Ellison.

He has also had notable successes for long-standing supporter Fozzy Stack, including Alexios Komnenos (Group 3, 2017), Diamond Fields (Group 3, 2017), Lady Wannabe and Pieces Of Paradise in Listed Races last year, Zihba in a Group 3 in 2018, Siricee in a Listed Race in 2017 and, memorably because it generated such excitement as part of a live TV broadcast in Britain, a dead-heat success on the heavily supported Son Of Rest in the hugely-valuable 2018 Ayr Gold Cup.

And let’s not forget that Chris had got off to a flying start to the current Coronavirus-interrupted campaign with a double at Naas on March 23rd – Lemista in the Group 3 Lodge Park Stud Irish EBF Park Express Stakes for Ger Lyons and In From The Cold for Michael Mulvany in the €50,000 Naas Racecourse Business Club Madrid Handicap.

It’s also worth mentioning that Chris was Ireland’s champion apprentice in 2005, 2006 and 2007, having joined Kevin Prendergast as an apprentice in 2004. Prior to this he enjoyed pony racing success and studied at RACE (Racing Academy and Centre of Education) – a link to their website can be found by clicking on this link.

He’s already earned the respect of his peers and industry professionals alike, now he has a burgeoning CV to complement such acknowledgements and, at just 32 years of age, there are, all things being equal, many more years of success to come.

I would like to thank Chris for taking time to answer my questions and to wish him every success for the future.

WHERE ARE YOU FROM? LIMERICK

HOW DID YOU GET INTO RACING? THROUGH DAD BRINGING ME PONY RACING

JOCKEY YOU IDOLISED GROWING UP: JOHNNY MURTAGH AS A KID AND MICK KINANE WHEN I STARTED RACING

FAVOURITE RACECOURSE AND WHY: LIMERICK IS MY LUCKY TRACK

TO RIDE IN THE COLOURS OF SHEIKH HAMDAM AL MAKTOUM MUST BE VERY SPECIAL:

I FEEL VERY PRIVILEGED WHEN I PUT THEM ON, BE IT IN A MAIDEN OR A GROUP ONE

YOU HAD AN EXCELLENT DAY AT THE CURRAGH ON CHAMPIONS WEEKEND WINNING ABOARD TARNAWA AND SEARCH FOR A SONG FOR DERMOT WELD. HOW MUCH DID YOU ENJOY THEM?

I THINK MY REACTIONS ON THE DAY SAID IT ALL. A GROUP ONE AND A GROUP TWO IS THE STUFF OF DREAMS

I’VE BEEN LUCKY THAT WILLIE HAS CALLED ON ME SINCE I WAS AN APPRENTICE. I’VE RIDDEN SOME NICE WINNERS FOR HIM AND I THINK PEOPLE TAKE NOTICE WHEN SOMEONE LIKE THAT USES YOU

YOU HAVE A STRONG CONNECTION WITH FOZZY STACK. LADY WANNABE WAS VERY IMPRESSIVE IN KILLARNEY LAST SEASON: HOW IS SHE? YOU MUST GET GREAT SATISFACTION RIDING WINNERS FOR HIM AS WELL?

YES, ABSOLUTELY.  FOZZY CALLED ME WHEN WAYNE LORDAN LEFT AND I REALLY ENJOY IT DOWN THERE. THE HORSES ARE NICE AND THE OWNERS ARE VERY LOYAL, WHICH IS A BIG THING FOR ME. LADY WANNABE IS GOOD, I AM HOPING TO KEEP THE PARTNERSHIP INTACT AND WIN A NICE RACE WITH HER

HORSE THAT YOU LOOK FORWARD TO THIS SEASON: I CANT WAIT FOR MADHMOON

RACE YOU WOULD MOST LIKE TO WIN ; I’D LOVE TO WIN THE EPSOM DERBY. LAST YEAR REALLY GOT THE JUICES FLOWING FOR IT

HOBBIES OUTSIDE OF RACING: I LIKE TO PLAY A BIT OF GOLF WHEN I GET THE OPPORTUNITY AND I LOVE SPENDING TIME IN MY YARD WITH MY MARES AND FOALS

FOOTBALL TEAM YOU SUPPORT: ARSENAL, FOR MY SINS

The Nick Scolfield interview can be found via this link

The Danny McMenamin interview can be found via this link