Friday night football returns to our TV screens (Live on BT Sport, KO 7:30pm) with the Berlin derby, Hertha Berlin v Union Berlin, and a significant one at that with the two city rivals neck and neck in the Bundesliga standings.

Union Berlin’s story is quite remarkable, so remarkable I couldn’t possibly fit it all into this match preview but here is a link to one of many interesting reads on how the clubs supporters helped to not only keep the club alive but to thrive into one of German footballs most popular teams (The Story of Union Berlin > https://www.planetfootball.com/in-depth/story-fc-union-berlin-cult-club-wish-supported/).

On the field however, Union’s success story has been just as impressive with the “pride of the East” securing promotion to the Bundesliga for the first time last season and Urs Fischer’s men currently sit 12th in the top flight and look set to secure safety with ease in their maiden Bundesliga campaign.

Hertha, who won’t be able to count on their usual fanatical home support in the almost 75,000-seater Olympiastadion Berlin, sit just one point clear of the new boys in town and their supporters will be eager to see the two-time German champions put Union followers in their place as such with a win here and, ultimately, a higher finish in this season’s league standings.

Both clubs have very similar league records this campaign but it has been the number of draws which has held Hertha back with 7 stalemates compared to Union’s 3 this season.

There are plenty of familiar names to followers of British football in the Hertha ranks with ex-Chelsea attacker Salomon Kalou – in the German press of late for breaking lockdown restrictions and as a result being suspended with immediate effect – while former Celtic defender Derek Boyata has enjoyed a decent campaign.

Star performer for Hertha this season has been striker Vedad Ibisevic, who was on the score-sheet in the recent resumption game away to Hoffenheim, a 3-0 win which certainly caught the eye. Despite his advancing years, Ibisevic (35) could be set to enjoy a strong end to the current campaign and add to his tally of 6 league goals. 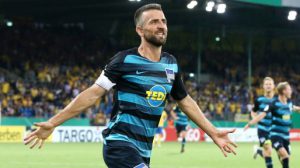 Also on 6 league goals this season is winger Dodi Lukebakio who joined from Watford for a hefty fee of €18 million but has certainly looked value for money to date making 26 appearances.

Marko Grujic was another high profile arrival from Liverpool who has been a regular for Hertha this year, while more would have been expected of Polish striker Krzysztof Piatek following his €21 million winter arrival from Italian giants AC Milan.

In truth, when you look at this Hertha Berlin side on paper based on some of the transfer business they have done in recent times, I don’t think it’s overly harsh to suggest that perhaps they should be performing slightly better than they have shown overall in the 19/20 season.

As for Union, their supporters were denied the day they had dreamed of for years last weekend as the mighty Bayern Munich came to town but, of course, there were no supporters allowed into the ground to see it. However, those watching at home will have taken heart from the fact the newly-promoted side caused the German champions plenty of trouble in the opening quarter of the match before Munich’s class shone through in a fairly convincing, albeit far from eye-catching, display.

Union Berlin have very much taken the Stoke City blueprint from when the Potters were first promoted to the Premier League by making no apologies for the fact they like to play a very direct style of football and take points over plaudits…..and who can blame them?

The first meeting between Union and Hertha this season was far from a classic as a late penalty secured hosts Union all three points to the delight of their fanatical supporters.

On the topic of supporters and home advantage, perhaps Hertha are one of the clubs who might be less affected by the application of “ghost games” in the Bundesliga in a bid to finish the current season as they have only won 3 of 13 matches on home soil this campaign. As for Friday night’s visitors, Union have also won just 3 times on the road since arriving into the Bundesliga, which means this could be quite a cagey encounter.

Everything from the league table to home & away form suggests this looks set to be a very tight encounter and the betting markets back up that trail of thought with hosts Hertha currently 5/4, the visitors Union 85/40 and the draw 23/10.

While it would be easy to chalk this one down as a draw, there was something about Hertha’s performance away from home against a side who were seven points better off than them last week in Hoffenheim that suggests this enforced break may just have allowed Bruno Labbadia’s side to regroup and refocus and, given the obvious talent scattered across the dressing room, I fancy them to turn over their local rivals this time around.

*All prices correct at time of publishing, always gamble with care.