Here is Alan Marron‘s preview of what will be one of two Classic races run at Deauville on Monday, June 1st, the Poule d’Essai des Pouliches (the French 1,000 Guineas, which is due off at at 3:25pm

The French 1,000 Guineas looks a fantastic race this year and, without doubt, the Andre Fabre filly TROPBEAU stands out at the forecast odds.

If you’ve read my preview of the French 2,000 Guineas (which is also available on this site), you will know that the Fabre stable was slightly out of form when French racing resumed, but they have really come into form lately and this race could be coming at just the right time.

This filly was sixth first-time out and then won three on the bounce before she made the journey to Newmarket for the Group One Juddmonte Cheveley Park Group One, one of the main two year-old races for fillie,s where she really caught my eye. 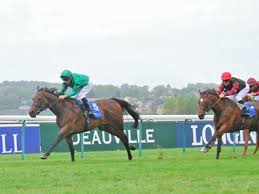 Tropbeau seen winning at Deauville as a two year-old

She was outpaced and pushed along in rear early on, encountered plenty of traffic problems when coming with her run and ended up finishing third behind Millisle, who is trained in Ireland by Jessica Harrington, and Raffle Prize, trained by Mark Johnston.

Her first run this year was her trial for the big race on Monday and she really impressed me again, this time with the manner of her victory. She travelled really well during the race and picked up nicely when asked by Mickael Barzalona.

She looks to have come to herself early this season and could be very hard to beat.

In terms of the drying ground, I can’t see that being an issue at all as her Newmarket run was on slightly better ground. I think a step up in trip in time would do her no harm whatsoever so she would be high up on my list of Oaks fancies if she manages to be successful here.

I have plenty of respect for the opposition but I think this filly has the form in the book and should be very hard to beat.