From Yorkshire in England, Oakley inspired one of those ‘Who’s that?” moments when winning a valuable handicap at York, his local racecourse, when he was just 16.

Rising weight forced a move to the jumping ranks but it didn’t take long for him to make his mark in that sphere either when winning on Linger (see picture below) at Cork in October for his new boss, Joseph O’Brien, on what was just his third ride over hurdles.

That gave him a fifteenth winner in total, with a bumper win for Alan King, three flat wins for Richard Fahey and now eleven wins in Ireland making up those victories.

There is no doubt that he is excellent value for his claim and his partnership with Joseph is one to follow with a great deal of interest.

As with all jockeys that have given of their time for these interviews, I wish Oakley all the very best for the years ahead.

WHERE ARE YOU FROM? MALTON, NORTH YORKSHIRE

HOW DID YOU GET INTO RACING? MY SISTER GOT HER FIRST PONY WHEN I WAS AROUND EIGHT YEARS OLD AND A FEW MONTHS LATER I STARTED TO RIDE IT. THE MORE I DID, THE MORE I ENJOYED IT. I WANTED TO GO FASTER SO I ENDED UP GETTING MY OWN PONY AND IT WENT FROM THERE. I GREW UP IN A RACING TOWN WITH RACING PEOPLE.

FAVOURITE RACECOURSE AND WHY? PROBABLY YORK AS I RODE MY FIRST WINNER THERE AT 16 FOR SOME VERY CLOSE FRIENDS AND FOR MY OLD BOSS RICHARD FAHEY.  ITS ONLY 20 MINUTES FROM HOME AND IS A GREAT TRACK WITH A GREAT BUZZ.

TOUGHEST COURSE TO RIDE: DOWNPATRICK. YOU NEED A HORSE THAT CAN HANDLE THE UNDULATIONS AND THE COURSE IN GENERAL, AND YOU NEED TO BE IN THE RIGHT POSITION THERE TO HAVE ANY CHANCE AND YOU ALSO NEED THE RIGHT HORSE THAT WILL CARRY YOU THERE AND HOLD THAT POSITION.

HOW MANY WINNERS HAVE YOU RIDDEN SO FAR: 15 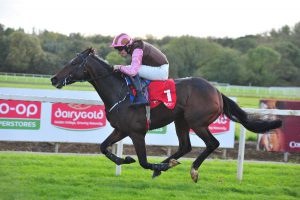 HORSE THAT YOU LOOK FORWARD TO THIS SEASON: ASSEMBLE. I WON TWICE ON HIM LAST SEASON AND HE IS STILL PROGRESSING. UNFORTUNATELY, HE WAS A NON RUNNER AT CHELTENHAM AS I THINK HE WOULD HAVE RAN A GREAT RACE THAT DAY. HE WILL BE AN EVEN-STRONGER HORSE NEXT YEAR AND I THINK HE HAS PLENTY OF POTENTIAL AND WOULD LOVE TO SEE HIM JUMP A FENCE.

RACE YOU WOULD MOST LIKE TO WIN: AINTREE GRAND NATIONAL

WHAT WOULD YOU LIKE TO OWN THAT YOU DONT HAVE ALREADY: I WOULD LIKE TO OWN A HORSE BUT AN AUDI A7 WOULD BE NICE, TOO.

HOBBIES OUTSIDE OF RACING: I ENJOY SPORTS – SOCCER AND GOLF AND I DO A BIT OF RUNNING NOW AND THEN.