Below is what I could take from it, it’s not comprehensive as I was on the panel, so forgive me.

BG Chantry House schooled well this morning. Happy with him. Hope he steps up.

RP Fiddlerontheroof, soft ground is key for him

Shark Rachael Blackmore has a glint in her eye when talking about Notebook, absolutely loves him. Wins.

RP Supasundae As good a form as we could have him in. Improved a lot from Leopardstown. Cilaos on testing ground could be a danger.

Shark If you could get a bet Nicky Henderson to win the race, that’s the one to have

BG Epatante has grown up this year, much more relaxed, schooled well this morning.

SS Felt Honeysuckle ran 10lb below her form in the Irish Champion. Wide open, that said Epatante clear top on figures, quick hurdler. Sharjah bit forgotten, rated to be there on sound surface.

DK Weld  Envoi Allen the one they have to beat, only issue may be temperament (?)

RP The Big Breakaway, really looking forward to him, hasn’t come off the bridle yet a worry perhaps, not been fully tested

RP Lay Champ, Barry will have to be at his brilliant best to get him jumping and into a rhythm

SS Faugheen 156, Copperhead looks the one

TM Often won by an outsider. Tornado Flyer could run well at big price for WPM

FB Philip Hobbs v happy with Defi. But not a race to have a bet in.

Shark Met lads in Willies down the garage this morning, their double for Chelt is Min and Appreciate It

SS Min more an Aintree horse. But A Plus Tard possibly a few pounds short of top class.

TM Riders on the Storm

FB City Island, saw him on Curragh other morning, looks great, may be ew alternative

SS Paisley Park a stone clear, City Island viable ew. Benie and Paisley would be rated same with sex allowance and he thinks the mare would win if they met

DK Won the race with a 28/1 shot, can throw up a surprise, that said he likes Solo

SS Irish don’t appear to be at the races; 157 Solo, 145 Aspire Tower. Likes Goshen, so impressed with nature of flat wins.

FB All JP’s probably run in the Fred Winter

BG Front runners probably set it up for Solo

Shark Fancies Solo, made dirt of them in Kempton

RP Impressed with Allmankind at Chepstow, thought he’d come back to them. And impressed with Sir Psycho in Haydock, jumps well.

BG Thyme Hill v good horse, horse with a future, one to beat

FB Speaks to Philip Hobbs quite often, thinks the world of him (Thyme)

SS Ramses de Teilee 151 comes out top. He can’t fancy him though, something progressive should come past him. Like for it to be Latest Exhibition for Paul Nolan

SS Al Boum Photo and Kemboy 175 (Kemboy down from 177), more of an Aintree horse. 171 Santini would be 1st horse to in a Gold Cup without winning a Grade 1 prior. So difficult to win a 2nd Gold Cup re Al Boum. Presenting Percy an ew chance.

BG Santini schooled this morning with cheek-pieces, they’ll be a big help to him

DK If Dalton Highway would get into the Coral he’d be hopeful of a big run, ew at 25s nrnb

Shark Gives his Rewritetherules a chance in Foxhunters 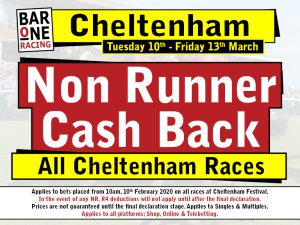 Charity Bets from Bar One Racing

Next Best from the Panel 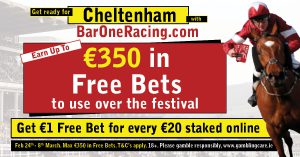