It is day three of the fantastic four-day Cheltenham Festival. The feature race is the Stayers’ Hurdle (3:30pm), which Paisley Park will be bidding to win for the second-successive year.

The seven-race card, which begins at 1:30pm, is previewed here by our regular racing pundit, Alan Marron

The reception that FAUGHEEN got after winning at Leopardstown last time was one of the best I have ever witnessed. People ran to get their position around the winner’s enclosure and I think it would absolutely lift the roof off Cheltenham were he to be successful here.

He is unbeaten over fences this season and, for me, it has given him a new lease of life at aged 12. He put Samcro in his place at Limerick over Christmas and that was no mean feat considering Samcro went into that race on the back of a fall behind Tuesday’s ‘Arkle’ second Fakir D’Oudaries when travelling well two fences out. Faugheen stretched away up the straight and won easily.

The Dublin Racing Festival was somewhat of a slog but he finished in front and that was all that mattered. His stablemate Easy Game fought him all the way but class got Faugheen through. He knows how to win at Cheltenham and Paul may take the bull by the horns and set off at his own pace.

There would be no better moment in Cheltenham history this week than to see Faugheen come home in front.

One of the most competitive handicaps of the week and to find a horse that is nicely handicapped can be like working out a maths equation. RELEGATE, a Champion Bumper winner at the Festival when trained by Willie Mullins, looks one to keep on the right side of here. She is now trained by Colm Murphy, who had plenty of success with the likes of Brave Inca, Big Zeb and Voler La Vedette over the last few years.

Her first run for her new stable was very eye-catching in the qualifier for this race behind a decent mare in Mary Frances. She was held up in rear by Brian Hayes on that occasion and did her best work in the closing stages but never troubled the leaders. Paul Townend will be on board here and, with luck in running, she will go very close.

The softer ground should be no issue to her and she will be one to watch flying home late in the day.

MIN has an excellent record over 2m 4f in his career and will look to improve on that here in a very decent renewal of the Ryanair Chase.

The only time Min was beaten over this trip was behind Politologue at Aintree last season when he went down by a closing three-parts of a length. He battled all the way to the line and I could see this race becoming something of a battle, too. The Rachael Blackmore v Paul Townend battle looks to hot up here after Rachael won part one with Honeysuckle on Tuesday.

Min made a nice return this season to win first-time out and then finished second to Chacun Pour Soi over 2m 1f at the Dublin Racing Festival. They were 24 lengths clear of the third and it was a very good run from Min considering he was sloppy at a couple of fences down the back. This will become very tactical and it could be all about stamina.

I think Min has plenty to give this season and hopefully he can show it here. 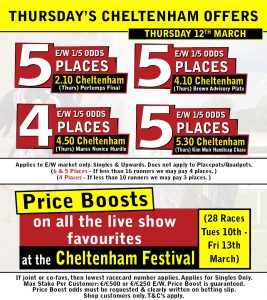 There is not much to say about this race other than Paisley Park should prove very hard to beat. There is plenty of each-way value against the favourite and this is something of a speculative selection but this horse could be staying on when the others have cried enough. RONALD PUMP is quite unexposed but has some nice hurdle form to his name and he could be a bit of a dark horse in this race. He probably wouldn’t have the class of many of the others in the field but I think his stamina will be his forte and he could run into a place. He finished a gallant second to Treacysenniscorthy in a Pertemps Qualifier and connections obviously think he could go well stepped up in grade. He has been mainly campaigned over fences this season and I think he is a far better hurdler.

He is one to keep on the right side of and is a nice double figure price.

Willie Mullins has a number of runners here but the JP Mc Manus-owned BLAZER is the one that catches the eye for me. He was a staying-on fourth at Leopardstown on the Sunday of the Dublin Racing Festival and that should set him up nicely for this. He gets in here off 140 and was second in a Galway Hurdle behind Sharjah off 139. Sharjah has done his bit for the form this week (third in the Champion Hurdle) and Blazer has always looked something of a handicap blot but has never really put it all together and produced it.

This will be his third run after a layoff and, no doubt, Willie will have him in prime order. The form of his last run has plenty of substance to it. The winner that day, Glamorgan Duke, ran well at Navan in a Grade Three behind Sizing Pottsie, while the third horse, Any Second Now, won at Naas next time out. Any Second Now will be a main contender in both the Aintree and Irish Nationals this season so, on that form, the handicapper is giving Blazer a chance.

He looks a solid each way selection here and I can see him going well. 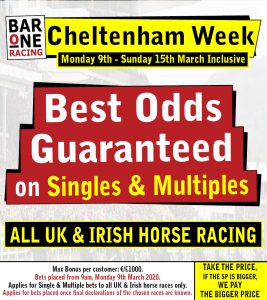 The Willie Mullins bandwagon marches on here and he looks to have plenty of chances in a race he won last year with Eglantine Du Seuil. COLREEVY is a very interesting runner here for a trainer who has developed a knack with mares over the last number of seasons. This mare got the better of Abacadabras in the Champion Bumper at Punchestown last season and that form was well franked this week with that horsed beaten by only Shishkin in the Supreme Novices’ Hurdle.

Colreevy won her maiden hurdle at Limerick in impressive fashion and then was a little outpaced when second to Minella Melody last time out.

I think Colreevy will love the Cheltenham hill and she looks the value on paper in a very competitive renewal of this race.

We finish day three with a very competitive chase but I am hoping for Ireland to complete a clean sweep on the day with PLAN OF ATTACK trained by Henry De Bromhead. This horse ran an excellent race when third to Roaring Bull in a very competitive handicap chase at Leopardstown over Christmas, where he looked all over the winner with 200 yards to go only to be nabbed by two late closers down the outside.

Barry O Neill, who is on board here, should be able to switch him off and get him to travel away. His jumping is one of his main assets and he should bring Barry into the race and hopefully he will get up the hill.

This is only his fifth run over fences and he looks very unexposed in relation to many of the others in the race. He rates very good value in a trappy contest and Irish eyes will be smiling if he can get home in front here. The stable are in good form so it all points to a very big run.