Willie Mullins knows what it takes to win this race and has done so with some very smart individuals in recent times. Champagne Fever, Vautour, Douvan and, most recently, Klassical Dream have been successful in this race for the maestro from Closutton, and it looks like ASTERION FORLONGE could add his name to the list.

He is unbeaten in his career to date and has improved in each run. He made hard work of justifying short odds in his bumper but got there in the final furlong to win snugLY enough. He was very impressive in Naas on his debut over obstacles where he bolted up by ten lengths with Pencilfulloflead back in second. Willie Mullins was of the opinion he was a staying type and he went to the Dublin Racing Festival with many questions to be answered. The manner in which he won the Channel Pharma Novice Hurdle was really impressive. He looked very babyish throughout the race, jumping left and jumping right, but he travelled away and has some engine as he galloped them into submission up the straight.

Every year the Supreme Novice Hurdle is run at a helter-skelter pace, but for me Asterion Forlonge will travel and jump and gallop them into the ground.

This is my bet of the week as I think he is one very special horse. Hopefully he can have them all in trouble going to the last and gallop away and get the Irish off to a flyer.

Our markets for Cheltenham on Tuesday can be found here

As with the Supreme, I would expect this race to be run at a very fast pace as many of the runners in the field like to be prominent in their races.  CASH BACK is one of them that likes to be up there from the start for the Paul Townend and Willie Mullins combination.

This horse really impressed me in Naas when he jumped for fun and tanked through the race. He won going away and the most interesting thing for me was that Danny Mullins struggled to pull him up after the winning line. He had plenty more in the tank. Patrick Mullins indicated to Lydia Hislop on Racing TV that the ground was on the soft side that day and it was an excellent performance for the time of year.

His next run was at the Dublin Racing Festival where he was second to Notebook, who reopposes here. Cash Back just never got into a rhythm that day and he eventually went down by a diminishing ¾ of a length.  He stayed on well and never shirked the issue when it came to a battle.

He could get his revenge on Notebook here and I expect a very big run. 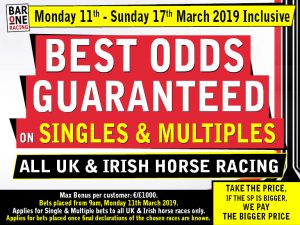 The Irish could start the Festival off to an absolute flyer and trainer Paul Nolan could add to the tally here with DISCORAMA who looks very nicely handicapped on past exploits at Cheltenham.

He finished a very creditable second to Le Breuil at last year’s meeting and then went and ran an absolute cracker at the Punchestown Festival where he was second to Delta Work in the Champion Novice Chase, with A Plus Tard back in third. He will have no issue with the softer ground that we are forecast and this trip could be right up his street.

He opened his campaign this season at Wexford where he was second to the Gordon Elliott-trained Champagne Classic with the now-notorious Roaring Bull back in third. His next run was very eye-catching for me in the Troytown at Navan. He was held up at the rear of the field and looked to have plenty on down the back. He stayed on one pace and I was interested to see where he would go next. He finished third to Easywork over hurdles and that looked a nice prep run for this race.

He looks to have been be laid out for it and it could give Brian Cooper another big day in the saddle. Solid each way value. 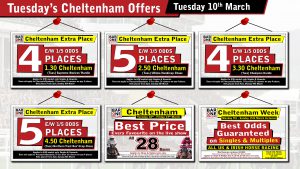 The Irish have come in force and hold plenty of chances in this race but, with the forecast softer ground likely to be in his favour, I would expect a big run from SHARJAH with Patrick Mullins on board.

Patrick has a very good association with this horse and he was travelling well in this race last year before he got brought down by the fall of Buveur D’Air. He produced an excellent time and performance when landing the Matheson Hurdle Grade One at Leopardstown over Christmas and trainer Willie Mullins was waxing lyrical on how good the time was for the time of year.

This horse looks to have one problem and that is his inconsistency. He then ran in the Irish Champion Hurdle and was second-favourite behind Honeysuckle. He bombed out in spectacular fashion and was very lacklustre throughout.  His trainer is a dab hand at getting him back to his best and the one thing this horse will do is travel. Patrick will have every chance turning for home and, with a bit of luck, he can have one of his going days.

I don’t have a strong opinion on this race as there is plenty of each-way value there at bigger prices also. It’s a very trappy Champion Hurdle and tactics will likely play a massive part. 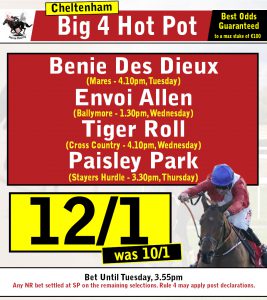 This could be one of the races of the week. The battle between Benie Des Dieux and Honeysuckle. It’s going to be a fascinating race and, of course, there are other contenders in the field but the form is at the top of the market and they will be very hard to beat.

BENIE DES DIEUX is an exceptional mare and is going to take all the beating here. In terms of form I think she has achieved much more than Honeysuckle has and the 2m 4f will suit her better also. She has won eight of her last nine races and the only blip was here last season when she fell at the last with the race at her mercy under Ruby Walsh.

She redeemed herself at the Punchestown Festival with an effortless victory and then went to Auteuil and was superb under Paul Townend to land the Grande Course De Haies Grade One over three miles. She returned this season and was electric at Gowran Park in the Galmoy Hurdle where she beat her stablemate Penhill by 21 lengths.

I am running out of superlatives to describe this mare. She has stamina and gears and she will be extremely hard to beat. She will be the short priced banker of the week for many and will look to retain her title from 2018. 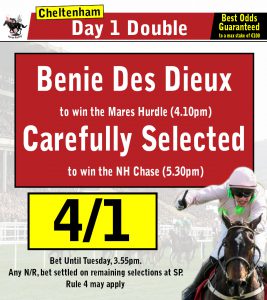 Another very competitive handicap as we near the end of Day One. Venetia Williams will be hoping for some luck now that the ground has gone on the softer side. Many of her horses excel on soft ground and she looks to have a very good chance here with ESPOIR DE GUYE. He comes into this race with a very unexposed profile over fences and is the type that could continue to improve. He caught many an eye with the manner of his victory last time at Ascot, where he jumped and travelled and won going away by ten lengths from My Way trained by Paul Nicholls. He has gone up 24lb in the handicap in three runs and he still looks to have plenty more to give.

If Charlie Deutsch can get him into a nice position early I can see him running a very big race and looks massive value at a forecast double figure price.

We end the card with another very tricky race. The Willie Mullins-trained Carefully Selected heads the market but I would have doubts about his technique over a fence and he doesn’t rate much value at the prices.  NEWTIDE is very much like the selection in the previous race. He looks very unexposed over the larger obstacles and could be anything over this extreme stamina test. Kim Bailey, who trains him, has said that they think he will get the trip without any problem so that will do for me.

If we take a look at his form, the most noticeable thing for me is that, while he gets the job done, he is not winning by big distances. He grinds it out and that could be perfect for this race. It could turn into something of a slog and he could be staying on best of all when the others have cried enough. He impressed me in his manner of victory in the Towton at Wetherby and that has been a very good trial for this race.

He has been subject of quite a punt in the ante-post market for this race and he looks the value as the favourite for the race looks on the short side. He looks the stand-out each way value with stamina likely to come to the fore. 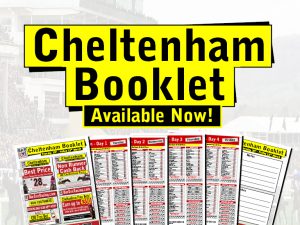