History will be made on Sunday as the Kansas City Chiefs and the San Francisco 49ers battle it out for the right to call themselves Super Bowl champions.

The Chiefs are making their first big stage appearance in 50 long years while the 49ers are seeking a sixth Lombardi trophy having last featured in the decider in 2013.

Despite their lengthy absence from the “greatest show on earth” the Chiefs head to the Hard Rock Stadium in Miami as the slightest of slight favorites (4/5 Chiefs, evs 49ers) having toppled the Texans and the Titans while they also picked up some eye catching wins early in the season over the likes of the Patriots to arrive here on an 8-match winning streak.

Such a run looked unlikely when the Chiefs were 21 points down at the end of the first quarter against the Texans only to rally back and claim the W with a 51-31 success. Patrick Mahomes has been simply sensational this season with the Kansas QB notching 5 TD’s and 321 passing yards during that incredible turn around at Houston and the twenty-four-year old again looks to hold the key this weekend. 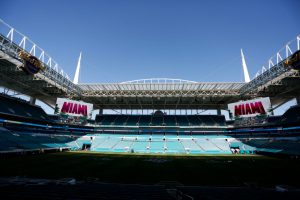 As for the 49ers and their story on route to the Super Bowl, Kyle Shanahan’s team have been extremely consistent throughout the campaign, finishing top of the NFC West division with a 13-3 record with running back Raheem Mostert inspiring San Fran to a 37-20 win over the Packers to reach the Miami decider with 4 TD’s and 220 rushing yards off 29 carries (7.6yrd avg). Similarly to Mahomes, it is Mostert who holds the offensive key when it comes to the 49ers game plan.

The sides did meet in pre-season with the 49ers coming out on top 27-17 with Jeffrey Wilson the main man with 2 TD’s off just 12 carries while Jimmy Garoppolo threw 1 TD and completed 188 passing yards with 14 of his 20 attempted passes successfully caught.

Wilson has failed to impress the head coach this season however and has only appeared sporadically while Garoppolo has been brilliant this season and is closing in on his first 4000+ yard season.

While Garoppolo only completed 77 yards against the Packers it was the QB’s ability to retain the pig skin and avoid crucial turnovers that helped shape the path to the 49ers success.

The Chiefs had a 0+/- turnover rate in their post season wins over Houstan and the Titans and will need to improve that side of their game if they are to end their desperate wait for Super Bowl success.

The 49ers trademark in terms of offense this campaign has been their running game, with San Francisco ranked second in the league in terms of rushing yards and first in the touchdowns department .

Tevin Coleman suffered an arm injury last week which may weaken their hand slightly but as already mentioned Mostert has been unstoppable at times this year and should enjoy the big stage against a side who have historically struggled against the run.

This year’s Super Bowl really is the perfect clash of styles with the Chiefs clearly holding the upper hand in the air but it’s the 49ers who can do most damage with their ground game which makes for a fascinating up and down finale.

Naturally, pressure and coping with the demands a game like this brings will play a part and there’s no great pressure in a Super Bowl than managing the red zone and in that regard it’s the 49ers who have the edge with Kyle Shanahan’s side allowing the ninth fewest red zone TD’s while the Chiefs ranked bottom of the pile when it comes to red zone TD’s scored in the regular season.