Alan Marron marks your card for one of Saturday’s big races, the Lanzarote Hurdle at Kempton 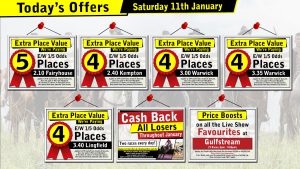 One major stat that stands out is that since 1980 33 winners have been aged seven or younger.

Taking these stats on board I will take a look at two value options into this race and give reasons why each would give us a decent run for our money.

This horse really stands out as plenty of value in this race as he travels well in his races and just struggles to get home. This race could be exactly what he needs where the pace is strong and he can travel into the race a little bit longer.

On his second-last run he stayed on from off the pace at Newbury behind Champers On Ice, trained by David Pipe. The fourth horse that day, Dolphin Square, has since franked the form by coming out and winning under David Maxwell in the last week. This horse then ran an absolute cracker at Cheltenham, where he was disputing the lead after they jumped the last and then faded in the last 120 yards to finish fifth behind Goodbye Dancer.

This horse has subsequently been dropped 2lb since his last run and Kempton should really suit and I would expect him to go very close. He needs kid gloves to be able to get his head back in front but he looks solid each way value and will be hard to keep put of the frame.

Our prices on the Lanzarote Hurdle can be found here

Within the last week the Hobbs’ battalions have really started to hit form and Larkbarrow Lad looks as though he could be extremely well handicapped ahead of this race.

This horse has never finished outside the first four in all his ten starts. The last time we saw him he was impressive at Worcester where champion jockey Richard Johnson needed to be at his strongest to get up close home. He stayed on well that day and this trip will be well within his grasp.

He has gone up from 128 to 136 in the ratings and he could be the type to progress and be a leading contender in one of the handicaps at the Cheltenham Festival.

Tom O’Brien was successful on this horse at Southwell where the in-running comments mentioned that he idled towards the finish. He arrives here off the back of wind surgery and could be best caught fresh. If the suggested pace is strong all the way, he could be the one staying on strongly when the others have cried enough.

He is currently in the top half of the betting and it wouldn’t surprise me to see him contend favouritism closer to the off time of this race.