Alan Marron is looking to unearth even more winners at Dundalk on Friday.

No stranger to success at Dundalk – or elsewhere, for that matter – Alan Marron is on hand, as usual, to offer his selections for Dundalk’s latest Friday-night card.

Our prices for Dundalk’s card are available here

Sarah Lynam is adept at getting her horses ready for the all-weather at Dundalk and SABRINA FAIRCHILD (8/1 as at 1pm Friday) looks to have a very solid chance here after some very eye-catching recent runs.

Her last two runs were very respectable where she was short of room close home and could have finished a lot closer to the winner with a clear run. Her last run behind Bambari was a decent one where she got blocked inside the final furlong and no doubt would have gone close.

The handicapper is very lenient here and leaves her on the same rating as for her last two runs. She is on a mark of 63 and no doubt has the ability to be a few pounds higher in the ratings when things go her way.

MOONMEISTER (9/1 as at 1pm on Friday) has been on my radar for quite a while and this race could be right up his street. He ran over a mile last time out at the track and that would have been well short of his optimum distance. He is better over middle-distances and this trip should be spot on. The booking of Wayne Lordan would suggest to me that Tony Martin is looking to a very good run.

This horse won the Ladies’ Derby at the Curragh at 50-1 and this looks more his grade. He kept on the same pace last time out and I would expect a much better performance here.

KASPARENKO (3/1 as at 1pm on Friday) looks a very interesting runner for the team of Ken Condon and Billy Lee. This gelding was formerly trained by Clive Cox in the UK and has some very strong all-weather form. He will have to be very fit to beat Bowerman but I think he looks the value here.

He was a winner off 98 at Kempton and is only 6lb higher here. This horse was successful after a break at Chelmsford back in 2018 and could be at his best when fresh.

It’s a trappy enough race for the grade but I would expect a big run here.

The draw could have been kinder to MAIREAD KATE (7/4 as at 1pm on Friday) but I would expect a very good run if she has progressed over the winter.

She made her debut in Gowran Park and was very quickly away and kept wide throughout. She made her ground to challenge wide up the straight and was with the winner at the two-furlong pole and ended up weakening inside the final furlong to finish fourth of sixteen.

On her second run she was made too much use of for me, when she broke well and tried to make all the running but weakened in the straight to finish a poor fifth of seven. She will likely have developed and been given plenty of time to do so. Also, she will likely be dropped in here from a wide draw and need luck in running.

Looks the value here and will be hard to keep out of the frame.

Last time out MR MOOJ (8/11 as at 1pm on Friday) went straight into the tracker after a very eye-catching run when partnered by Declan McDonogh. He was off the bridle a long way from home and stayed on strongly in the straight to finish fifth, beaten five lengths behind Moll, who was a very nice winner on the night.

Joseph O’Brien’s horses tend to improve from first run to second so I would expect Mr Mooj to be more clued-in and travel a little sweeter and, if he can do that, he should be able to finish his race a little better.

On paper, there is not much in this race that should put him under pressure, but Michael Halford and Andrew Oliver both have first-time-out juveniles that could make them all go.

However, Mr Mooj should be very hard to beat with the normal progression expected.

I was very sweet on the chances of CAPTAINOFTHEBOUNTY (12/1 as at 1pm on Friday) last Friday night and he ran very flat and will need to have come on a good bit from that to be competitive here. Joseph O’Brien is quick to step him up in trip from seven furlongs to a mile and that could make all the difference.

The pace over seven furlongs last week seemed slow for the grade and he kept on at the one pace. Beauchamp Baegnal was the winner last Friday night so the form is questionable.

Captainofthebounty had plenty of chances to get his head in front when trained by Aidan O’Brien and ran a couple of very strong races in maidens. This should be his grade and he will be very hard to keep out of the frame. 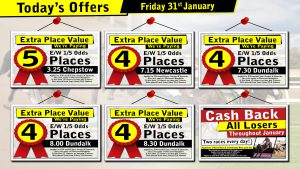 The first division of this handicap and John McConnell couldn’t have his team in any better form. He has juvenile hurdlers this weekend that could run well at both Leopardstown and Musselburgh but the partnership of BELLICK (11/1 as at 1pm on Friday) and Siobhan Rutledge could go very close here.

He is drawn fifteen here and that looks to be the only real negative. He ran very well last time out when third to Lapilli, only beaten by three-quarters of a length where he was outpaced and stayed on strongly. If he can get a nice position early and get some luck in running I would expect him to be doing all his running late on when the others have come to the end of their tether.

RED ALL STAR (10/1 as at 1pm on Friday) looks nicely-positioned in stall two to go very close here in what looks a competitive division of this handicap.

He has been dropped a pound since finishing fourth to Beleaguerment and that gives him a really good chance. He was a winner off a mark of 45 so he should have every chance here. This will be his third run after a break of 97 days and he should be close to full fitness now. Gerry Keane is a local trainer who likes to get winners at Dundalk and this horse looks the value and should be hard to keep out of the frame.

He has run many of his best races at Dundalk and looks like he could have another big race in him here.