We’ve already witnessed a shock in this season’s NFL post-season with the Tennessee Titans breaking New England Patriots domination with a 20-13 upset during the NFL Wild Card weekend. However, it’s the divisional play-off round which has provided the most upsets historically with the potential for that trend to continue this weekend.

We’ll start with the Titans. Fresh off the back of their thrilling win over the Pats, Tennessee travel to Baltimore to take on the Ravens in what will be a showdown made for fans of rushing football with Derrick Henry closing in on the 4,000 yard mark in his career (182 yrds + 1 TD v New England) while the Ravens are the league’s top rushing offense.

At this stage of the season it’s all about coping with the pressure and, with it, displaying good game and clock management and that is something Baltimore have excelled at this campaign meaning an early lead for the Ravens will leave Tennessee with a real uphill struggle.

At 2/9 the bookies seem to agree that another Tennessee upset looks unlikely, but with the hosts only losing 2 games all season compared to the visitors 7, I’ve a feeling this might be more one-sided than some people think.

Elsewhere, the Minnesota Vikings caused a shock of their own when they got their nose ahead in overtime against New Orleans and Mike Zimmer’s side will go in search of another win at San Francisco this weekend.

The 49ers finished top of the NFC West with a record of 13-3 while the Vikings finished behind the Packers thanks to a 10-6 record. In terms of points scored and conceded this term both teams look evenly-matched on paper which should make home-field advantage all the more crucial for the 49ers here.

Houston Texans have already claimed a win over Kansas City Chiefs this season (31-24) and will look to double down when it matters in the post season this weekend.

This should once again be a battle of the quarter-backs with both QBs featuring high up in the 2017 draft, but it’s the Chiefs who arrive here with a much stronger offensive record during the regular season, recording 451 points for compared to just 378 for the Texans.

This can be credited to how well the Chiefs protect the football and, with Kansas showing real improvement off the back of that regular season defeat to Houston then I have to fancy Kansas to make use of home-field advantage this weekend.

Leaving the best till last, at least on paper, this weekend’s match up between number 2 seed Green Bay Packers and Seattle Seahawks at Lambeau Field. Green Bay notched up a regular season record of 13-3 while Seattle went 11-5.

The stats don’t make good reading for Seahawks QB Russell Wilson, who is 0-3 at this venue while Packers’ king Aaron Rodgers recorded consecutive 4000+ yard passing seasons with one more TD in 2019 than 2018.

It goes without saying the Seahawks will have to find a way to shackle the man regarded as one of the NFL’s greatest of all time.

This really does look a tight contest with Green Bay going 7-1 on home turf this season, while the Seahawks had an identical record on the road.

The Packers defensive record during the regular season makes for slightly better reading than their opponents this weekend and, with Russell Wilson under pressure to finally deliver at a venue he does not have good memories at, I just side with the home side once more.

Wins for the 49ers, Ravens, Kansas and Green Bay is available at 2/1 as part of our weekend NFL hot-pot., back it here. 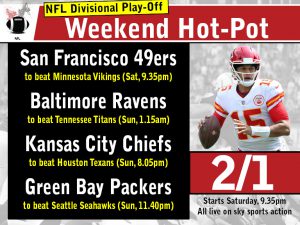