This wouldn’t be the strongest handicap hurdle to start Gowran Parks biggest meeting of the year but there is a very notable runner down at the foot of the weights. SHANTOU SISU is a gelding who has shown very consistent form in recent starts and deserves to get his head in front.

The handicapper has been very lenient for me leaving him in here off a mark of 86. He was running a very good race under Ricky Doyle two starts back when he attempted to make all and then fell two out when still going well.

He was running off 85 that day an thus has simply been raised a pound since finishing a distant third to Our Roxanne at Limerick last time out.

Gowran is a tough enough track to try and make all the running but this looks a weak enough renewal and I would be very disappointed if this horse struggles to make the frame. He has been favourite in three of his last four runs so he might just be the value here.

Willie Mullins is likely to have plenty of ammunition at his local track and AIONE looked to be well capable of landing a maiden hurdle following his second place finish at Fairyhouse on New Years Day.

He is likely to be a short price here with Rachel Blackmore on board in this race confined to lady riders.

This horse was impressive in his point and bumper victory and he should have no problem landing the odds here. He is the type to be a chaser in the making and it looks to be whatever he does over hurdles will be a bonus to his chasing career.

One of the features of the day and it has produced a quality field but it looks a very trappy contest. Apples Jade came back to form last time out where she was exceptional in the Grade One Frank Ward Memorial Hurdle at Leopardstown over Christmas.

Benie Des Dieux reappears after a very successful season last year where she was victorious at Cheltenham and also at Auteuil. Penhill is a former World Hurdle winner and would have a very decent chance if coming back to anything like that form.

The horse that I am really looking forward to seeing is the Gordon Elliott trained DEATH DUTY who hasn’t been seen in 758 days but was a very progressive horse in his juvenile days and if he can return in that form he could surprise some of the big guns here.

The best time may be to catch him fresh. He was last seen over hurdles behind Bacardys in a Grade One Novice at the Punchestown Festival of 2017. He may well be the value here and worth a look for a small play. The slight disadvantage is the seven runner field for each way purposes.

Henry De Bromhead has his team in very good form and he could be in line for another winner with the improving ELEAZER DES NEIGES. He really impressed me with an all the way victory at Limerick last time out.

He galloped them into the ground and could well do the same here. He steps up from 2m 3f to 2m 4f and that extra furlong could bring about a little more improvement.

He is only a six year old and if he can progress in the coming months he could be a force in the decent staying hurdles for the Fairyhouse and Punchestown Festivals. Hugh Morgan gets on well with him and he looks the one who could give them plenty to do here. Looks solid each way value. 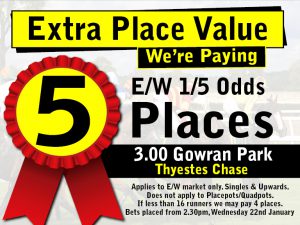 The race that stops a county looks to be an exceptional renewal this year and Willie Mullins holds a strong hand to win the race for the second consecutive year. CHEF DES OBEAUX formerly trained by Nicky Henderson looks to be the class angle into this race and if he can improve for his new stable from a very good handicap chase over Christmas at Leopardstown.

He was wide throughout and he jumped with plenty of enthusiasm. He made a bad mistake two out and dropped back and then ran on again to finish fifth behind Roaring Bull. He has been a bit of an antepost gamble for this race after Patrick Mullins mentioned him in a recent interview with Lydia Hislop on Racing TV.

Patrick seemed very sweet on him and if he has had an uninterrupted preparation I would expect him to go very close here. In recent years this race has had a class angle with the likes of Invitation Only, Monbeg Notorious and Champagne West getting their head in front. Chef Des Obeaux would be the class angle here and he could well progress into a Gold Cup contender.

Susannah and Rich Ricci could be in line for another winner in their colours here with ANTEY who has contested two very hot beginner chases in his career so far and looks like he has a good chance to break his duck.

He was a distant 9th 27 lengths behind Faugheen at Punchestown where he may have just had a run to get his fitness back up to speed. He ran very respectably next time out where he finished behind a stablemate again when 20 lengths behind Melon at Leopardstown.

Noel Meade knows the family of QUITE INCREDIBLE very well having trained Cherokee Bill who is out of the same family. With not much form to go by here it could be well worth having a mall interest here. Noel Meade would normally have his bumper horses well clued in for their first run and I would be very disappointed if this horse was not in the first three.