HIT THE SILK 17/2 drops to the minimum distance here for the first time and the way he travels in his races suggests that this is a very wise move. He was a massive eyecatcher behind Alfredo Arcano last time out where at the two furlong pole he was travelling sweetly from off the pace and just struggled to see out the distance. That looked a very strong race for the grade and this race should be more to his liking. This will be his fourth run for David Marnane and with his handicap mark dropping he should be able to get his head in front sooner rather than later. He gets in here off 77 and Gavin Ryan claims five pounds. The pace looks strong in this race and he should be the value from off the pace.

MOONMEISTER 15/2 had two entries for this card and it looks as if Tony Martin has gone for the easier assignment here. This horse on his way would be a class above these but it’s whether he will actually put it all in. He was successful in the Ladies Derby at the Curragh back on the 20th July beating Perfect Tapatino which was a very good performance. He then followed that up by being second to the Sheila Lavery trained Galeola at Leopardstown which was another very strong run off a mark of 71. The booking of Seamie Heffernan heightens my enthusiasm this time around as I believe it will take a very good run from one of his opponents if he brings his A game to the table. The one negative that I have is that the trip could be a little on the short side but he will be staying on when the others have cried enough. 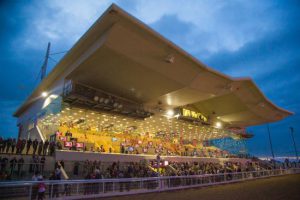 THEOBALD 9/2 is the class angle in this race and the step back up to 1m 4f should really suit him and he looks to be very hard to beat. His most recent runs since a gelding operation were a little lacklustre to say the least but he could get his own way in front here and Kevin Manning is a dangerous man when dictating the pace. Many of his opponents here have a number of question marks against them whether it be there form or the fact they may struggle over the trip. Theobald has a question over the trip himself but the fact that he makes the running he should be able to go a steady gallop. Could be very hard to beat.

MIRACLES IN MAY 4/1 looks a very interesting runner on his first attempt on the all weather surface. He has some solid turf form and could give Ben Coen a good spin here from stall seven. In terms of form he has only been out of the first five once in his last seven runs on the turf. He was behind Yaforthedfoe the last twice when he was prominent early and looked to get bogged down in the ground. He may need the run and improve for it but the better surface will suit and looks a solid each way proposition in a tricky enough race. 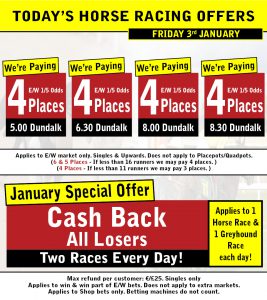 I have followed a line of form at Dundalk for a while now and this is the race that we see the reappearance of EACHARN 11/2 who looks to have a very good chance at getting another victory on the board following a five pound rise in the weights. The form has been franked by numerous horses in recent weeks and Eacharn now has the chance to improve it even more. He travels well in his races and got up to nail Loaded late on last time out. He won cosy and I think there is plenty more to come on the all weather. He returns of a 56 day break and that is the one negative I have. He looks a solid play in a competitive race.

Michael Halford has his all weather team in flying form over the winter and MECKLENBURG 4/1 has a very good chance to break his maiden here at the second attempt. He wore a hood first time out which suggests to me that he may be a little temperamental. His first run was very eyecatching at 66-1 where he stayed on under hands and heels and if he improves off the back of that he will go close here. Only the fifth horse from that race has won since so the form doesn’t have the strongest look to it. He is 139 days off the track and if he has strengthened up since that run I would expect a big performance here.

Declarations for tomorrows race-card. Our first meeting of 2020.

The booking of Colin Keane on SCOTTS HONOR 9/2 looks very interesting as he looks to improve on his second place finish last time out behind Ragtime Red who reopposes here. There is a 2lb swing in the weights for ¾ of a length and that should entitle Scotts Honor to get closer and avenge that defeat from last time out. This horse has been mixing it between flat and hurdles and he should strip fitter now and go very close. He has been big prices in most of his runs and the booking of Colin Keane just heightens my opinion on this horse.

If Scotts Honor can frank the form in the previous race then I would expect ASANDA 7/2 to go very close here with the returning Wayne Lordan in the saddle. Asanda came back after a 63 day break to finish a highly creditable third behind Ragtime Red where she was doing all her work in the closing stages. She gets in here off the same mark of 49 and if she can improve off the back of that run she will give them all plenty to do. She is very lightly raced and the owners could have plenty of fun with her off this mark. Solid each way value in a competitive race.

You can back Alan’s selections here