GUINEVERE really impressed me with the manner of his victory last time out when she raced from out of the weights and got the better of Miss Snossyboots close home. It was quite a strong field she defeated with the likes of Sheisdiesel, Nimitz and Theobald all in behind.

She has increased 6lb in the handicap from her last run and I think once she has her head in front she could be very hard to beat. She was third of a mark of 76 on the turf so the mark of 77 shouldn’t really inconvenience her. She will be hard to keep out of the frame.

The booking of Colin Keane for PRETTY LITTLE LIAR suggests that connections are hopeful of a very big run. She has gone up 2lb in the handicap following a staying on second behind the John McConnell trained Magi Gal last time out.

She was slightly impeded two furlongs from home so with a clear run here she should run much better.

She is a course and distance winner off a mark of 46 which would leave her in contention off a pound higher. She has been mixing it behind both codes in recent times so she will strip a bit fitter here and should be very hard to beat with the champion jockey on board. 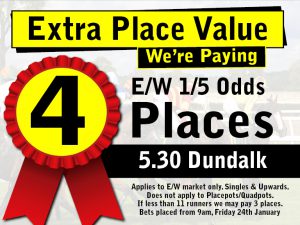 Ado McGuinness has his team in very good form at the minute and could be in line for another winner with ROCK ON AIDAN and Declan Mc Donagh aboard. He has the perfect draw in stall four and Declan should be able to get a position and track the pace and come with a late run.

Declan got a very good tune out of him the last day and was tracking the winner Happaunge and just got going too late but he kept on well.

He has been very consistent in recent runs and deserves to get his head in front. He is going to be very hard to keep out of the frame and looks like the one they all have to beat.

JM BARRIE is one of the horses that I have followed in recent weeks and his most recent run has been nicely franked with the winner Eglish going to Wolverhampton and being successful since. JM Barrie travelled up well behind Eglish and stayed on well despite hanging slightly inside the final furlong.

This race looks slightly weaker than what this horse has contested in recent weeks and looks solid value here. The booking of Chris Hayes suggests that connections are hopeful of a very good run and Chris should be able to adopt a handy position and let the horse travel and quicken off the pace. I would expect him to go very close here.

Dermot Weld has been very select with runners in recent weeks and he has entered SIRADJAN here to try and break his maiden. This horse has been gelded since we last seen him run in Killarney back on the 19th of July 2019. The most noticeable thing that this horse did at Killarney was stay.

He stayed on strongly and surface at Dundalk could really suit him with the long home straight. This horse obviously had some temperament issues at home but if the gelding operation has worked he should go very close here.

A very interesting runner here for Joseph O’Brien with CAPTAINOFTHEBOUNTY who will wear a tongue strap for the first time here and also after a gelding operation. It is highly likely that Joseph will have a hurdling campaign in mind for this horse but this could really be a stepping stone in preparation for that. He could turn out to be a very slick juvenile hurdler so whatever he does here will be a bonus to that campaign over obstacles.

He was formerly trained by Aidan O’Brien where he struggled to get his head in front. This looks a very weak maiden and this horse looks head and shoulders above the rest of the field and should be very hard to beat.

TOMMY TAYLOR will be looking to reverse placings with Yuften and looks nicely weighted to do so here. He was formerly trained by Kevin Ryan across the water and this will be his third run for Johnny Levins. He has been very consistent so far in his Irish career and looks very capable of picking up one of these pots on the all weather. He has been raised 5lb from his last run to a mark of 88 but had been contesting races off marks in the 90s on the turf in the UK. If he can recapture any of his form with Kevin Ryan he should be up to winning this race. This race looks very trappy but if he gives his running he will go very close.

John Mc Connell has his team in excellent form and has a great record in the last two races in recent weeks at Dundalk. His runner here MAKE GOOD was a very solid fourth behind stablemate Magi Gal was staying on under hands and heels riding and could go close here if staying the trip.

This will be his third run for the stable after previously being trained by David Dennis in the UK. The trip shouldn’t really be much of an issue as he has form over seven furlongs on turf when trained by David Brown. If he can improve off the back of that last run he is a double figure price here and I wouldn’t be surprised to see him run very well. 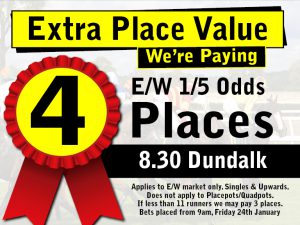