Despite the ongoing controversy regarding Altior and Nicky Henderson’s latest decision not to run the two-mile king, Saturday’s Grade 1 Clarence House Chase should be a thriller if last month’s Tingle Creek at Sandown is anything to go by, with Defi Du Seuil and Un De Sceaux set to battle it out for top honours at Ascot on Saturday (3.35).

It was Philip Hobbs’ Defi Du Seuil, who narrowly held Un De Sceaux at Sandown before Christmas, with Hobbs’ charge idling towards the finish and almost being caught out by Paul Townend’s mount, who defied his age with an almost faultless display.

However, with rain having fallen in the build-up to the race (the going was heavy, soft in places on Saturday morning, connections of Willie Mullins 12-year-old Un De Sceaux have voiced their confidence that more-testing ground could see the tables turned in this 2m1f contest.

Before we take a look at this rematch in further detail, we should look at the other three runners and decide how much of a threat, if any, they rate to the two market leaders.

Bar One Racing Horse Racing markets can be found here

Janika was extremely impressive when landing the Grade 2 Haldon Gold Cup at Exeter in November but was well off the pace in the Tingle Creek Chase before disappointing again when returned to 2m4f at Cheltenham on New Year’s Day.

While you can never rule out a Nicky Henderson charge, who will also have the added bonus of Daryl Jacob being back in the saddle after James Bowen deputised during Jacob’s injury absence, it does appear as if Janika’s progress has stalled for now at least.

Capeland registered a bloodless victory in a handicap chase over C&D just two starts back but found Grade 2 company too hot to handle at Kempton over the festive period and has been a long way behind Defi Du Seuil in the past, while Dan Skelton’s Marracudja is taking a huge step up in company after a convincing handicap win at Wetherby on his latest start.

While I do expect Janika to improve from his last two outings thanks to the return of Daryl Jacob (that’s no slight on James Bowen, by the way, but Jacob has clearly struck up a close understanding of this gelding), the 7-year-old looks to have plenty to find on the top two here.

So, will we see a repeat of the Tingle Creek result or will the potentially softer ground play into the hands of Willie Mullins’ Un De Sceaux?

Well, speaking to Alex Hammond on Sky Sports Racing, Patrick Mullins said he felt that his father Willie’s horses have been improving for their first run of the season and that Un De Sceaux should strip fitter for his Sandown outing. He went on to remark that the same could not be said for Defi Du Seuil as he was already having his second outing of this campaign.

Un De Sceaux clearly loves it round Ascot, winning his two previous racecourse appearances there in 2016 and 2018, and again the going really will be the key factor in the lead up to Saturday with the Irish raider boasting a superb record when the mud is flying.

Combine that with a record in excess of 50% over fences you just can’t help but be impressed by this brilliant veteran. 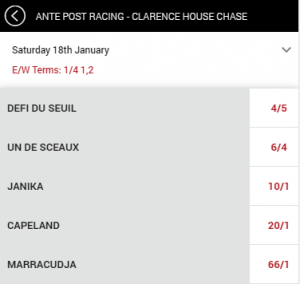