There’s no doubt about it, Manchester City let their neighbors off the hook at Old Trafford a couple of weeks ago. 3-0 up after just 38 minutes of play, United fans would be lying if they told you they didn’t experience flashbacks to the 6-1 hammering famously dished out by Roberto Mancini’s boys back in 2011.

However, with the game as good as wrapped up City took their foot off the gas in the second half, perhaps the clearest indication yet that even City don’t obsess over their once mighty rivals like they might once have, with Marcus Rashford’s goal 20 minutes from time offering followers of the Red Devils some sort of hope (false hope in my eyes).

Now without their star performer after a catastrophic oversight by United’s medical team, a decision (to play Rashford when carrying a knock) that has brought even more heat down on Ole Gunnar Solskjaer and particularly Ed Woodward, it’s impossible to see how United can claw their way back into this tie especially when you consider Pep Guardiola’s sensational record in this competition. 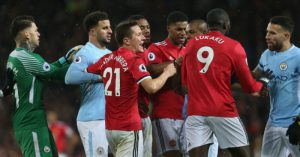 A 6-0 win away to Tranmere Rovers will have done little to lift United spirits after last weeks Old Trafford horror show against Burnley in the Premier League while Manchester City could afford to rest the likes of Sterling, Aguero and De Bruyne to name just a few and still cruise to a 4-0 win against a decent Fulham side on Sunday.

Before the first-leg I raised the point of squad depth and how City had been able to rest such stellar names in the build up to this derby and the same trend has developed ahead of this second leg in which the Citizens will enjoy home advantage as well.

Having only lost twice at home in the league all season (one to United before Christmas but that was largely inspired by the now absent Rashford) then it is impossible to look past another comprehensive City win this week.

In fact, Wednesday’s match holds the potential to get very ugly very fast for Solskjaer as he’s in something of a lose lose situation (unless he can pull of a miracle of course). What I mean by that is if United harbour genuine hopes of getting back into this tie they are going to have to hit City early and come out and attack the hosts, but should City pick the visitors off on the counter and score an early goal then Solskjaer must decide whether to keep attacking with pride and hope for a respectable result even if it means elimination or the Norwegian must order his troops to shut up shop and ensure the scoreline doesn’t get ugly.

Either way if either of those outcomes come to fruition then the former Cardiff City boss is going to take pelters from supporters and press alike.

A home win offers little value at 3/10 but as mentioned above there’s no reason City can’t have some fun against their local rivals here and as a result -1 at 4/5 looks a cracking bet while if you’re feeling slightly braver then City -2 at 9/5 is far from beyond the realms of possibility but having seen last seasons Premier League winners ease off so dramatically in the first leg then there are slight risks attached to that bet.