ENOUGH SAID and Arcanears renew rivalry from their last run where Arcanears won by half a length. The weights favoured Arcanears that day but now there is a 4lb swing and that should mean Enough Said goes very close here.

There should be more to come from Enough Said as he is a three year old and this will only be his third run on the surface at Dundalk. He was placed three times on the Polytrack at Cagnes Sur Mer in France so at least he handles the surface. His run last time out was full of promise. He was bumped soon after the start and was pushed along in eight after halfway. He found plenty for pressure and ran on strongly

Bar One Racing’s prices for Dundalk can be found here

John Oxx would have been very pleased with run of IORONTA on debut and she looks like she can go very close here with improvement to come. She finished fourth to So Suave last time out and, to be honest, looking back at the race, not much went right for her. She was pushed along in ninth at halfway and when the penny started to drop she made her effort just to be short of room at a crucial stage. She ended up being beaten just over two lengths and that was a very promising run.

She is nicely drawn here as well and, on form, on form looks one of the value bets of the night.

For those of you who follow my previews, ye will be well aware of a race that has worked out extremely well recently and we return to it here for our next selection. CAPPADOCIA finished fourth behind Eacharn with Loaded in second and Tribal Path in third. Loaded went and won on his next start and Tribal Path was successful on Tuesday under Vanessa Maye. The horse that finished sixth that day was Tick The Boxes and he finished second on Tuesday.

In terms of Cappadocia he is nicely handicapped off a mark of 61 as he was a course-and-distance winner off a pound higher rating and has also won off a mark of 65 over six furlongs. The seven furlongs is just as far as he wants to go and, if he arrives there travelling well, it could be the last minute before the button is pressed. I would see it very hard to keep him out of the frame. 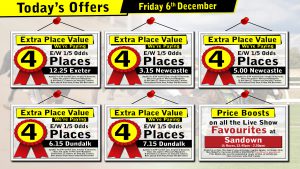 In her first handicap, I m going to take a small chance on STORM APPROACHING for trainer Denis Hogan. She was a drifter in the market last time out in a maiden but ran well to finish seventh under hands-and-heels riding close home. The third from that race, Bodak, has come out and won since. The handicapper has been lenient enough for me with a mark of 60 and she could be much better than that. She most definitely caught the eye last time out as she looked like she would come on for the run.

This is the feature of the night and GEOLOGICAL could be successful again before he heads to Meydan for some sun on his back. Vanessa Maye gets a real tune out of this horse and he has duly gone up 17lb in the handicap in recent runs. There is a very strong chance here that she will be able to pop him out and set the fractions and, as far as we have seen in recent runs, he is a very tough horse to pass.

He has the beating of Gordon Lord Byron on a piece of form from the first of November. The main thing with this horse at the minute is when does the improvement stop? He is an ‘in running’ punter’s dream as, if he happens to be three lengths clear with a couple of furlongs to go, he will be hard to pass. Should go very close here.

This will be quite a speculative selection but I am willing to take a small each way chance on MOONMEISTER, trained by Tony Martin. This horse was successful in the Ladies’ Derby at The Curragh off a mark of 68 on the turf at the big price of 50/1. He returns to the all-weather here after seventy days off the track and it wouldn’t surprise me to see him going very close.

He was a winner off a mark of 80 on the all-weather back in 2015 and, if we bring Nathan Crosse’s claim of 5lb into the equation, he effectively gets in here off 66. If he is right fitness-wise, he could well run into a place.

Small each-way play at what should be a double figure price.

8.15 HAPPY CHRISTMAS FROM ALL AT DUNDALK STADIUM MAIDEN 1M 2F

Jim Bolger introduces a very interesting newcomer here in THE HALL and in what looks a very ordinary maiden he could take all the beating.

He is a brother to Parish Hall, who won the Group 1 Dewhurst Stakes, and Hall Of Fame, who was Group-placed. Jim Bolger knows the family of this horse extremely well and this race looks the ideal starting point and then he can be put away for next season.

The only slight negative that I would have is that he is already gelded so may have temperament issues. It doesn’t look the strongest race and I expect him to go very close.

ART OF AMERICA got an absolute masterclass from Colin Keane last time out and he could follow up here with a 3lb rise in the handicap. Trainer Noel Meade said that Dundalk was to try and freshen this horse up and it looked like it did when he flew home up the inside to get up late in the day last time out.

Gavin Ryan’s five-pound claim could be the key to unlock another victory for this horse and he may go back over hurdles if this can sweeten him up.

Solid chance in a trappy contest.