The Christmas tree, lights and decorations are up, the mad rush to the shops has begun and Christmas tunes are creeping onto every radio station. But, for sports fans, it’s the sight of the Ally Pally and all the pantomime of the PDC World Darts Championship that marks the start of the festive period.

Our PDC World Championship markets can be found here

Mighty Michael van Gerwen lifted the coveted Sid Waddell Trophy at the start of this year to establish himself as one of the sport’s true greats by winning a third PDC world title to move ahead of dual-PDC World Champions John Part, Adrian Lewis & Gary Anderson.

While the Dutchman still has a long way to go to reach Phil Taylor’s phenomenal record of 14 PDC World titles, at the age of just 30 “MVG’s” dominance could go on for at least another decade, which would leave him right up there with the Stoke-On-Trent great.

Another Christmas at the famous Alexandra Palace means another new challenger for the “Green Machine” with recent Grand Slam Of Darts winner Gerwyn Price the perfect villain for this time of year. 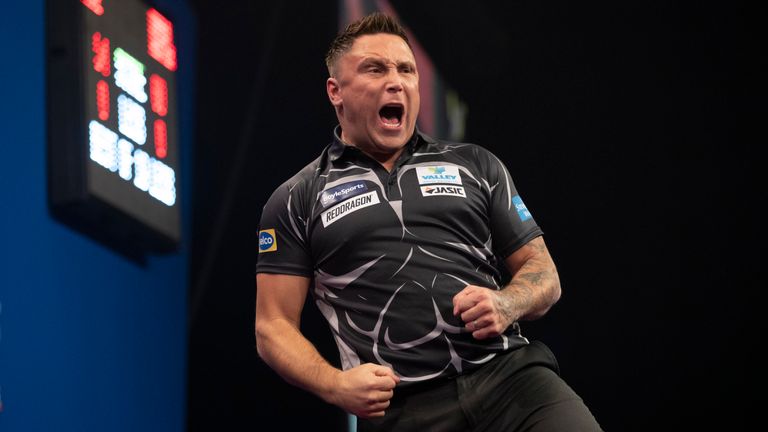 Recently prone to controversy, Gerwyn Price could be cast as the PDC World Championship pantomime villain

A former-Rugby League & Union player, Price has excelled in his transition from tossing the oval ball to throwing Tungsten and has already established himself as the man on the oche everyone loves to hate, which makes for a brilliant potential rivalry with Mighty Mike.

Famously clashing on stage with back-to-back world champion Gary Anderson during the GSOD final, the Welshman was handed the largest player-fine in PDC history for his part in the on-stage shenanigans as Price lifted the trophy to a reign of boos from an unimpressed crowd.

What’s followed has been a relentless torrent of abuse and heckling on every stage the recent Players Championship runner-up has taken to. In fact, the abuse has been so toxic at times that Price, who didn’t pick up a dart until he left school, had mooted the possibility of retiring from the game all together.

One player who would love to see the back of the Welshman is Peter “Snakebite” Wright, who was on the wrong end of a 16-6 scoreline in this years GSOD final and has, incredibly, lost 10 of his 11 major finals (6 of them to Michael van Gerwen). Reaching 6 major finals this year and winning them all, Van Gerwen arrives here as the in-form player and, aside from Price, it’s hard to see who may challenge the defending champion’s dominance.

Looking at who MVG may need to overcome in his first match, we could see an all-Dutch affair, with Jelle Klaasen facing Northern Ireland’s Kevin Burness for the right to take on the World number 1.

Klaasen was once a youngster with the world at his feet with one of the most electrifying throws in professional darts, but has totally lost his way in recent years, failing to make it past the 4th round of any major this year, not qualifying for several majors, while Burness is new to the scene, having only come through Q-school last year, but by winning the 2018 Tom Kirby Memorial Irish Matchplay, qualified for last year’s “worlds” where he defeated Paul Nicholson 3-0 before going out 3-1 to Gary Anderson.

A 21/10 outsider in his opening match against Klassen, the Newtownards man could be the first value bet of the tournament.

Another interesting subplot to this years tournament is how far legendary figure Raymond van Barneveld will go in his final competition before retirement. While American opponent Darin Young is no straightforward proposition, should the 5-time world champion (PDC & BDO) come through his opening match then a last-16 appearance against Dave Chisnall could be on the cards, albeit “Chizzy” may need to overcome a player who loves the “Ally Pally”stage in Vincent van der Voort.

With Peter Wright perhaps lying in wait for the winner of those above ties in the quarter-finals, it’s impossible to see “Barney” enjoying the sort of send-off we’d all love to see.

Gary Anderson looks to have a nice clear run on paper and should go well despite a below par 2019, while James Wade has enjoyed a revival of late, reaching the final of the 2019 Masters where he lost out to MVG.

And that’s the common denominator here: MVG appears to have a march on the rest of the field. No matter how strong their recent form may be, it just doesn’t stack up against the relentless Dutchman’s.

Mentally strong, and knowing what it’s all about on the big stage, you simply can’t oppose the reigning champion to defend his crown at 11/10.