One of three Grade 1 races to be run at Fairyhouse on Sunday December 1st as part of the track’s Winter Festival, the €90,000 Grade 1 BarOneRacing.com Royal Bond Novice Hurdle is due off at 1pm, is run over a distance of two miles and has an illustrious history.

Will Reilly casts his eye over the ten horses that were left in the race at the five-day stage on Tuesday November 26th.

Previews of the Grade 1 Drinmore Novice Chase and Grade 1 Hatton’s Grace Hurdle, which are on the same Fairyhouse card, will also appear on this site.

The most-exciting young hurdler in racing, Envoi Allen, who is trained by Gordon Elliott, immediately catches the eye in the nine-runner field. He won on his only start in point-to-points and is now unbeaten in five races under Rules, including the Grade 1 Weatherbys Champion Bumper at this year’s Cheltenham Festival and on his hurdling debut at Down Royal.

He oozes class and is an exciting prospect. 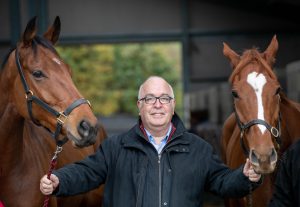 His opponents on Sunday are Abacadabras, also trained by Gordon Elliott, who created such a good impression when winning the Grade 3 For Auction Novice Hurdle at Navan on November 10th, Darver Star (Gavin Cromwell), who has won his last four races, Joseph O’Brien’s promising duo, Embittered , a winner at Naas on November 9th, Charles Byrnes’ Turnpike Trip, a winner of three of his four hurdle races to date including the Grade 3 Joe Mac Novice Hurdle at Tipperary last time, Peter Fahey’s Soviet Pimpernel, who won at Listowel before finishing second at Cheltenham last time, and the Willie Mullins pair of Fast Buck, who has finished behind both Abacadabras and Darver Star on the track this season but beat Turnpike Trip in a Listed hurdle at Galway in July, and Foveros, a four-year-old French import that has won three of his four races since arriving in Ireland from France, including at the Galway Festival in August.

Willie Mullins has won the Royal Bond seven times in the last eleven years. Gordon Elliott has so far won it once, with Mengli Khan in 2017, but holds a strong hand this year in what is shaping up to be a race to savour.

SELECTION: It has to be ENVOI ALLEN, with Abacadabras set to chase him home and give Gordon Elliott a one-two in the prestigious race 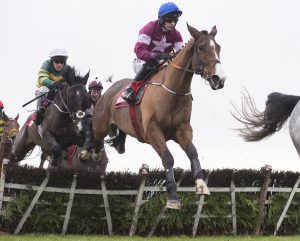 Mengli Khan on the way to winning the BarOneRacing.com Royal Bond in 2017

Bar One Racing’s involvement with the Grade 1 Royal Bond Novice Hurdle began in 2006. Two years later, the meeting’s other Grade 1 contests, the Drinmore Novice Chase and the Hatton’s Grace Hurdle, were added to the Irish independent bookmaker’s sponsorship portfolio.

The Royal Bond has been won by such racing stars as Istabraq, Moscow Flyer, Hardy Eustace, Hurricane Fly, Jezki and Nichols Canyon, each of them a champion in their own right, some of them all-time greats.

Sunday’s race looks set to follow in the race’s high-class tradition. See you there!