Will Reilly reflects on a fascinating trip to the stables of Gordon Elliott, which signalled the start of the jumping season in Meath

Well, that was a treat. Leading trainer Gordon Elliott opened the gates of his yard on November 7th in order to give the National Hunt season in County Meath the perfect lift-off.

Those in attendance, and there were TV crews, radio-station representatives and journalists aplenty at Gordon’s Cullentra stables, were granted a look behind the scenes of one of Irish sport’s powerhouses. It was a fascinating experience, very instructive, and a real pleasure to have been involved.

Scattered, well-aired American-style barns at the yard house clusters of equine talent. Gentle warm-ups and then more-strenuous exercises were well-organised and carried out with military precision. There was even structure to what might have appeared to the casual observer as potentially-chaotic scenes in the hose-down areas post-exercise as large groups of horses returned in groups from their work. 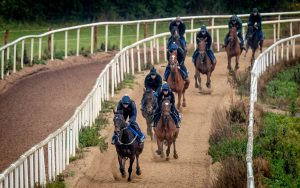 Watching horses at morning exercise is a rare joy

Clearly, everyone knows what they are doing – as one would expect from such a successful operation – not least the trainer, whose observations, awareness, knowledge of his horses and horse racing and attention to detail all seem as natural to him as breathing.

Furthermore, each member of staff was cheerful, polite and helpful.

These things were a joy to observe and Gordon was the perfect host. Posing the questions about horses and their running plans was Fairyhouse’s excellent race-day host, journalist and broadcaster, Thom Malone. 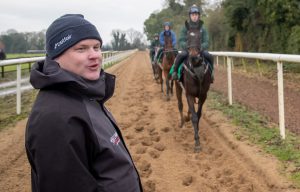 In the warm-up area – a wide, circular, sand-based enclosed arena – each horse carried a number. If the horse was wearing a red saddle-cloth, they were earmarked for Navan, not least the Ladbrokes Troytown Chase on November 24th; if their saddle-cloth was blue, they were contenders for the Bar One Racing Winter Festival at Fairyhouse on Saturday November 30th and Sunday December 1st.

The latter included Apple’s Jade (number 1), who could bid to win the Grade 1 Hatton’s Grace Hurdle at Fairyhouse on December 1st for a record fourth-successive year, Samcro (3), a Cheltenham Festival winner who was impressive on his chasing debut at Down Royal on November 1st, Battleoverdoyen (4), a big, mild-mannered, talented gelding who also won well on his chasing debut at Galway on October 27th, Envoi Allen (6), the unbeaten big-money purchase, who has impressed in winning all five of his races under Rules, including the Champion Bumper at the Cheltenham Festival and on his hurdling debut at Down Royal on November 2nd.

Also among the group was Abacadabras (5), who further enhanced his reputation with a smooth hurdling win at Navan on November 10th. He could now run in the Grade 1 BarOneRacing.com Royal Bond Novice Hurdle at Fairyhouse on December 1st, as could Envoi Allen, who seemed to find things effortless when we saw him work up Gordon’s sand gallop during the morning, and Andy Dufresne, also a smooth winner at Navan on November 10th.

Samcro and Battleoverdoyen are Grade 1 BarOneRacing.com Drinmore Novice Chase entries at Fairyhouse (December 1st), although Gordon said that he was unlikely to run them against each other at this stage. 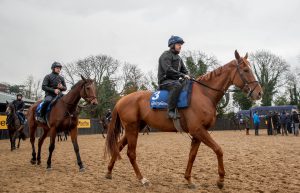 The exciting Samcro warming up ahead of morning exercise

Despite her defeat to Bacardys in the Grade 2 Lismullen Hurdle at Navan on November 10th, Apple’s Jade could still head to Fairyhouse for the ‘Hatton’s Grace’. If plans change, there is always Surin ready and waiting in the wings, the four-year-old filly having been a silky-smooth winner of the Grade 3 Fishery Lane Hurdle at Naas on November 9th. 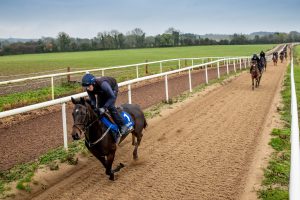 To see just about all of the horses mentioned in the flesh was a joy. We also got to see and have a photo-call with Tiger Roll, who has an unprecedented third-successive Aintree Grand National in his sights next April.

He looked a picture and behaved, as usual, impeccably. International interest would go through the roof if his record-breaking National attempt gets the green light, which looks likely.

No doubt, Gordon will handle the attention and pressure in the same down-to-earth way he seems to handle most things. 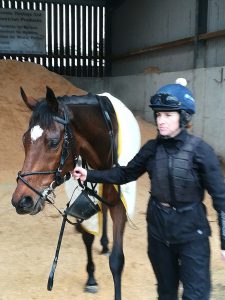 To round off the visit, we were invited to the room, complete with a huge TV, pictures of big-race winners and racing memorabilia, where races get reviewed and plans get discussed and formulated. Again, Gordon fielded questions with good humour and patience as we tucked into freshly-prepared food and drinks.

It was the perfect end to a hugely enjoyable morning, for which Peter Killeen and his team at Navan, Peter Roe, Kate O’Sullivan and the Fairyhouse team, Thom Malone and, of course, Gordon and his staff, deserve huge credit and thanks.

It set in motion the jump racing season in Meath that will now journey on to Navan on Sunday November 24th for a card that will include the Grade 3 Monksfield Novice Hurdle, the Listed Coolmore National Hunt Sires Irish EBF Mares Flat Race and the €100,000 Ladbrokes Troytown Handicap Chase, and then journey on to Fairyhouse on Saturday November 30th and Sunday December 1st.

No doubt, it is a hugely exciting time for racing in Meath, one that got the perfect beginning in Cullentra on November 7th.