We are back on the all-weather for another midweek fixture and it starts with a very competitive claimer. NIGG BAY looks to be a very interesting contender here for the stable of Johnny Levins with Mark Enright on board. Mark would normally be seen over the larger obstacles so it looks a shrewd jockey booking. The horse comes here on the back of a pipeopener at Laytown and that should leave him spot on for this. Most of his winning form has come over the minimum distance but he has shown he gets home over 6f also when finishing second at Dundalk back in March 2018 and he was also a very solid fourth over 6f to Alfredo Arcano at the track in December 2018. He is the type of horse that could give new connections plenty of fun over the winter. Solid chance here. 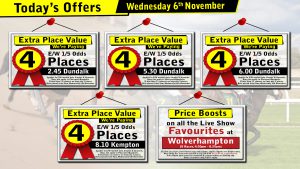 Trainer Michael O Callaghan who had a recent foray to Rosehill in Australia with I Am Superman to contend the Iron Jack Golden Eagle will be looking to get to the winners enclosure here with KITTEN ON THE KEYS. She was a massive eyecatcher last time out where she finished second to On Tick in a nursery. That was over 5f and the step back up to 6f could be right up her street. This race looks easier than what she contended last time and it will be hard to keep her out of the frame. The handicapper has left her on the same mark of 62 which gives her a decent chance.

This is not the strongest maiden in the world and it may to follow ALGERIA who is a new recruit for Joseph O Brien with Trevor Whelan in the saddle. This horse is in the same colours as Ming who was successful on debut for Joseph at Dundalk Stadium. Ming has since been sold and they have a very progressive juvenile hurdler in A Wave Of The Sea. Algeria will not need to be anything special to get involved here. Small each way shout.

COUNT OF CARABASS is a notoriously slow starter but he ran a lot better last time out at the course and should he get a better start here he could go very close. That was his first run at Dundalk and the booking of Chris Hayes here suggest that they fancy his chances. Chris Hayes has a good rapport with this horse and won off a mark of 52 on him on the turf. He gets in here off 49 so I would be expecting a big run. He looks like he is coming into a bit of form and could be a decent each way shout.

I selected FASHAAR in a recent preview and I am very happy to say that he could follow up here off his revised mark. He has gone up 4lb in the handicap when beating Masalai who reopposes here and should do so again. Anthony Mc Cann has his team in excellent form and this horse could be well above his handicap mark and prove hard to beat. He could effectively run up a bit of a sequence here. He is still 7lb lower than one of his winning marks from last season so there should be more to com. Will take plenty of beating here.

LADY BOOMERANG could be slightly inconvenienced by the draw in 13 but on her last run she is a major factor in this race. Her mark of 59 gives her a decent shout as she had a good run off a mark of 64 back in October 2018. She is very lightly raced and there should be plenty of improvement to come as this will be her fourth run this season. Cheekpieces applied for the first time last time out are kept here and that could help her concentrate and finish her race out. She wasn’t beaten far last time and a similar run with luck in running and she will be hard to keep out of the frame.

COME BACK AND STAY looks a very interesting runner at the foot  of the weights for trainer John Mc Connell. She ran an absolute cracker from out of the handicap to finish third behind her stablemate Rockview Emperor. She is tongue tied for the first time and she should finish out her race stronger here. Joe Doyle is on board and with the horse drawn in 15 he might have to slot in and ride her for some luck. She stayed on really strongly when she got into the clear last time out and will hopefully be a different proposition here. She should be a decent price and give us a decent run for our money.

This is somewhat of a speculative selection on form but MOUNEERA is a very well bred filly who should appreciate a step up in trip on handicap debut. Mick Halford will be looking for her to break her maiden sooner rather than later and this doesn’t look the strongest race in the world. She ran a very encouraging race when finishing 9/15 behind Getaway Katie Mai at Listowel and a repeat of that form would put her in contention here. The handicapper has been very lenient for me giving her a mark of 63. She could be far better than her mark suggests. If she finds her form in handicaps she could easily be an 80 rated filly who will improve  for the increase in distance.