Alan Marron has been in red hot form with his tips this year.

HONG KONG is a horse who the Coolmore team have had to take there time with but the application of blinkers at Naas last weekend worked the oracle.  The form has already been franked by Nullifier who finished third, he went on to win at Navan on Wednesday.  The ground will be on the soft side here and if the blinkers work as well on a second occasion he looks the value bet. He looks to have now found his level and he could be one to progress into next season. 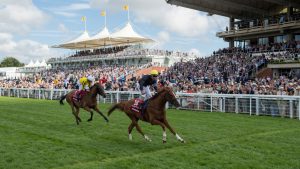 Mark Johnston will be looking for more improvement from his runner here OVERWRITE and on form he will most likely get it. This horse really impressed me with his manner of victory last time out when he made the long journey to Brighton. He absolutely demolished a sixteen runner field from the front by using his explosive pace from the gate.  He handled softer ground the time before that at Chester where he nearly got a Franny Norton masterclass from the front. His mark of 83 looks to be manageable and he could be one to keep a very close eye on. I would be putting him into your tracker as one to follow no matter what he does. Should go very close here.

TAMMOOZ went into my notebook after the manner of his win last time out. He traveled extremely well on softer ground and then idled once he hit the front.  He was most definitely worth more than the winning margin and he is a horse who is showing progression in each run. He has gone up a total of 11lbs since he won at Windsor and I think he will still be a force to be reckoned with here. He has form to find with Ritchie Valens who re-opposes here but I think they have gone in different directions in terms of form. Tammooz could well be a listed or group performer lurking in a handicap.  Big chance here. 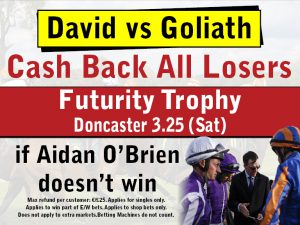 Formerly known as the Racing Post Trophy this race has been the talk of many journalists in the past week as Aidan O’Brien dominates the field. We have an excellent MONEY BACK ALL LOSERS on this race should Aidan O’Brien not win the race. That for me is very possible with the Andrew Balding trained KAMEKO in the race.  This horse has done nothing but improve and his form is up there if not better than the favorite for the race Mogul. Kameko finished second in the Group Three Solario Stakes when he was still very babyish and only once the penny dropped he ran on strongly and was unlucky not to get there in the dying strides. He then went on to finish second behind the Aidan O’Brien trained Royal Dornach in the Royal Lodge Group Two and that for me was another massive step up. Oisin Murphy may have to be at his brilliant best to navigate around the Ballydoyle battalion but Mogul and company could be under plenty of pressure late on if this horse gets rolling.  The question mark could be over the ground but he is a tall individual so the softer ground might be exactly what he needs.

AMOMENTOFMADNESS is a credit to his connections and returns to the scene of one of his biggest victories when landing the Portland in 2018. He was second in this race last year and he looks like a horse who only gets going in the latter end of the season. He was second in the Portland this year last time out and that was a very good run. I think it sets him up nicely for this and his mark is still 2lb lower than when making all in the Portland in 2018. He is quite one dimensional as you know what you will get with him, Richard Kingscote should pop him out and try and make all. He is solid each way value and will definitely give us a good run for our money.

ALEMARATALYOUM is a commentators nightmare but he should go close here and give newly crowned champion jockey Oisin Murphy another winner on the card.  This gelding has been extremely consistent of late and handles softer ground so will be high up the pecking order here. His trainer Stuart Williams is very shrewd so I would watch the market closely. They don’t normally leave it behind.  His mark of 97 is the highest he has raced of but this claiming handicap will be a step down in grade and give him a very good opportunity of success. Solid selection.

5.15 BACK FROM THE FIELD WITH VERTEM APPRENTICE HANDICAP

Karl Burke had a very strong season and could go close here with the Rhona Pindar ridden SHALLOW HAL.  This is the horses first run since a wind op and as it is very lightly raced it is one to pay close attention to. He has form on softer ground and the wind op could just help him to finish out his race over this extra furlong.  Small each way selection to finish the card. His handicap mark has come down quite a bit and this is his first time contesting a class four since he finished second here in November 2018.