Alan Marron has been in red-hot form with his tips this year.

There is a treat for followers of floodlit racing on Wednesday with three meetings taking place – Kempton Park (from 4:40pm), Wolverhampton (4:50pm) and Dundalk (5pm). The Dundalk meeting is previewed here by our regular racing aficionado and successful tipster, Alan Marron.

Dundalk will race again on Friday when the feature race will be the €60,000 Cooley Fillies Stakes, a Listed Race.

Going into tonight’s meeting Donnacha O’Brien led Colin Keane by six in the Irish Flat Jockeys’ Championship, which reaches its conclusion at Naas on Sunday. Donnacha has five rides tonight while Colin Keane has a ride in each of the eight races.

We are offering an extra-place for betting purposes in three races at tonight’s Dundalk meeting – see below.

Yale, who was a $1million purchase for the Coolmore team, will look to repay some of that price-tag here, but I would tread with plenty of caution about taking the forecast odds on her. He has twice been a beaten favourite and the switch to the all-weather will need to work.

In terms of value in the race, SON AND SANNIE has some solid form and could be the one to give the favourite plenty to do. He showed plenty of pace at Navan last time out, where he faded close home, and the application of first-time blinkers here could do the trick.

The fifth horse from that race, Teddy Boy, has come out and won since so that race has a bit of substance to it.

I’ll be disappointed should he not go close here.

MASTER SPEAKER looks the most interesting runner in this race for me. He has the beating of Yuften, who heads the overnight market, on a Killarney run back in July but has been slightly out of form since. This drop in grade could be exactly what he needs and he could be quickly back in the winner’s enclosure.

If we take a look at the victory in Killarney, we will see he beat Yuften by 2 ¾ lengths and he gave him a pound. The weights for the race this time around favour Master Speaker as he receives 3lb from Yuften.

He will never get a better chance for me and would be one of the best bets on the night. MUNFALLET looks to be a big player here having shown more spark last time out over two furlongs further at the course.

Ross Coakley tried catch-me-if-you-can tactics and set a searing pace from the front. Its a tough thing to do at Dundalk, and that night he did well to stick on to finish fourth. He drops back in trip here to a mile and, if the same tactics are adopted, they might struggle to reel him in. He is 3lb lower than when finishing second over the course and distance in November last so the handicapper is giving him a chance.

Anything above the 7/1 mark would be a value play and he should go close. Solid each-way shout.

Dundalk is a track where if you are positioned badly in the home straight you might struggle to get luck in running. LORD RAPSCALLION is one horse that suffered that fate last time out at the track when he was beaten just over four lengths but had no room throughout the final furlong. I would completely excuse that run and give him a very big chance of going close here.

His run prior to that was franked here on Friday night when Scream, who I selected, went on to win the claimer. She had finished behind Lord Rapscallion when he was second. He is well treated in terms of his turf and all-weather mark as he went close on the turf off a mark of 83 and is in here off 73. 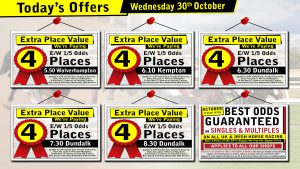 Vatican City heads the market here after a very eye-catching run behind the exciting Kinross at Newmarket and he will be extremely hard to beat here if handling the surface.

Vatican City’s stablemate MR TAMBOURINE MAN could be the one to keep a close eye on in the ‘betting without the favourite’ market. A close relation to the 84-rated Dalileo, this horse will likely need further but could be doing his best work close home.

Overall, it’s a race to watch rather than get involved with.

Vatican City, a full-brother to the dual 2,000 Guineas winner Gleneagles, could be one to look out for next season and, no doubt, the master of Ballydoyle is looking to get the maiden victory out of the way. Leanne Breen got off the mark on Friday last when successful with Latchet (who runs earlier on tonight’s card) and she looks to have a very good chance with LA NOVIA here.

This horse has had three runs on the turf after a six-month break and he could be a live threat here off his current mark.  He was a winner off a mark of 53 for Michael Halford on this surface and returns here off a mark of 46.

He will need to improve off the back of his turf runs this season but there is no doubt his trainer will exploit the handicap mark in coming weeks.

Anthony McCann is no stranger to training a winner at Dundalk and his runner here FASHAAR, in the colours of Rita Shah, could go very close. He ran an absolute cracker last time out, which was his second run after a break, where his jockey Luke McAteer, who is aboard here, took up the running and went clear only to be caught close home. The drop back to 7f looks to be perfect for this horse.  He was a winner here over 7f in March 2018 off a mark of 69 and then finished second at Wolverhampton later in July off the same mark. He gets in here off a mark of 62 and with luck in running I would expect him to go close.

He seems to be well suited by forcing the pace and I would expect him to make the running here.

To see the Coolmore team have a Galileo filly just rated 54 is somewhat of a rarity, but one of their two contenders here, FLYING, could be very interesting on her handicap debut.

Her three runs to date have been poor to say the least, but we can never discount a filly with breeding lines as strong as this one – she is a full-sister to Group One winner Misty For Me and Ballydoyle. The main question is will the surface bring out improvement.  If it does I could see her going very close here in a handicap that lacks potential improvers.

For anyone who follows my previews you will also notice one of my favourites runs in this race – Brokopondo. He is a massive double-figure price and I wouldn’t rule out a decent showing from him.