The rollercoaster ride that is the League of Ireland play-offs gets underway this week with the 4th and 3rd placed sides in this season’s First Division facing off in their first leg of their first round tie with the winner earning the right to play 2nd placed Drogheda over two legs before the winner of that tie tackles the 9th placed team in the Premier Division to decide who takes their place in the top-flight next season…..Indeed it’s a drawn out yet wonderfully entertaining process.

The opening game of this play-off series takes place on Friday as Cabinteely host Longford Town with the Midlands outfit holding home advantage in Friday week’s crucial second leg by way of finishing 3rd and ahead of Cabinteely in this season’s regular First Division season. 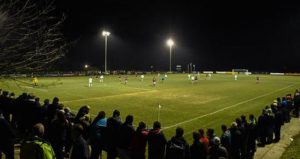 Stradbrook is the venue for the opening game of the 2019 LOI play-offs.

A final day victory away to the tricky Cobh Ramblers saw Longford Town secure 3rd spot and with it home advantage in the second leg of this tie against Cabinteely with De Town suffering a surprise defeat at home to Bray Wanderers the week previous in a game that could still cost Longford dear. The reason being Longford’s poor discipline on that occasion as both Karl Chambers and Anto Breslin saw red with former Wolves defender Breslin now set to miss both legs of this tie after being handed an additional game ban by the FAI while Shane Elworthy, regarded by many as the division’s best full-back is also suspended due to his yellow card count.

Meanwhile, Cabinteely (who had already secured a minimum of 4th position) left it late to overcome bottom side Wexford FC in the final round of league matches as summer signing from the Leinster Senior League Yuta Sasaki scored an 81st minute winner at Ferrycarrig Park. Sasaki is the League of Ireland’s first ever Japanese player and has made a big impact since arriving at Stradbrook. 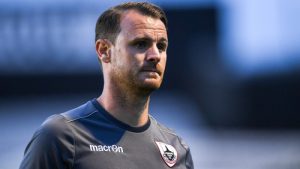 Daire Doyle has been thrown in at the deep end after the shock resignation of Longford manager Neale Fenn just a few weeks ago.

Since joining the League of Ireland in 2015, Longford Town have found Cabinteely to be something of a bogey side and are yet to taste victory against the Dubliners in 3 league meetings this term with Cabo winning twice (home & away) while the sides drew 1-1 at Stradbrook in the opening meeting of the campaign.

That opening meeting between the sides saw the playing surface at Stradbrook grab the headlines for all the wrong reasons but thankfully with the rugby season now over (Cabinteely play at the home of Blackrock RFC) the playing surface is in top condition, although the very open nature of Cabo’s home ground has been cited by some Longford fans as an advantage to the hosts as it allows Pat Devlin’s side to take the sting out of the game when required and frustrate the opposition.

However, such tactics were very evident even at Longford’s more confined City Calling Stadium in May as the visitors frusrated the hosts from first whistle to last before hitting Longford with a sucker punch in the dying stages as Kieran “Marty” Waters grabbed a late winner.

Longford have struggled in big games in recent years and will have to prove they have the mental strength and discipline to get past this well organised and efficient Cabinteely side, something they haven’t managed since the end of last season when Dylan McGlade lit up the “CCS” with a stunning solo goal to cap off a 4-1 Town win (McGlade is now on the books of Bray Wanderers). 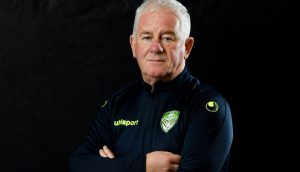 Pat Devlin has handed Longford play-off heartbreak in the past.

In truth with their poor record in Stradbrook (No win there since Sep 17) and the fact key players are set to sit out this first leg through suspension, Friday’s game is all about keeping the tie alive ahead of Friday weeks decider at the City Calling Stadium in Longford where the Red & Black won 10 of their 13 league matches this season (only champions Shelbourne had a better record).

This will be the first time Daire Doyle has faced Cabinteely as the Longford boss (Doyle is currently club caretaker after Neale Fenn’s departure) so it does remain to be seen if a difference in approach will be tested against an opponent who have had Longford’s number in recent meetings. Under Fenn, Longford often dominated the ball with little success against the well organised and disciplined Cabinteely which led to frustration setting in and some Longford players trying to force things with long balls which were gobbled up time after time by the brilliant Cabo pair of Jack Tuite and Conor Keely at the back. Longford must now fall into the same trap here.

Despite talk of Longford lacking a proven goal scorer this season, they still managed to outscore Cabinteely in the league (22-21) but if you had to point towards a player to tuck away a big chance you’d probably be looking at Cabo’s pair of Kieran “Marty” Waters (5 league goals) and division top scorer Rob Manley (17 league goals).

Even though he rarely operates as an out and out striker, Longford’s highly talented Dean Byrne has rallied to 12 league goals this term and will be crucial to De Town’s play-off hopes (One to watch!)

Overall, you’d have to fancy the home side to capatilise on venue advantage and the fact Longford will be arriving in the capital without their two stand out full-backs while up front the likes of Sean Boyd just hasn’t fired since arriving on loan from Shamrock Rovers. Aaron Dobbs is still finding his way back to full fitness and may well yet have a big say in these play-off matches but for now the recommendation is a narrow home win which will set up a massive night at the City Calling Stadium in a weeks time as play-offs football returns to CCS for the first time since 2013 when Longford made it all the way to the final round only for an injury time striker from Bray’s Kevin O’Connor, who would not only sign for Town the following season but play a major role in the title winning campaign, broke Longford hearts and kept Pat Devlin’s Seagulls in the Premier Division……Can Devlin do it again? We can’t wait for the action to unfold!

Longford to qualify over two legs (No odds currently quoted, may be available upon request).