A very competitive 3 year old maiden hurdle where many horses are having their first run over obstacles. SEVERUS ALEXANDER is a horse who Joseph O’Brien could have plenty of fun with over the winter if he adapts to his new discipline. He is rated 73 on the flat and that mark should bring him into the equation here. He has a liking for soft ground as he showed when winning on the flat at Listowel recently. Could give them all plenty to do here. 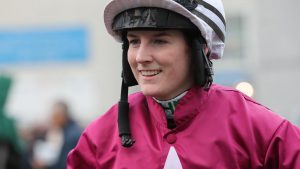 REBEL EARLY is the horse in this race that has the most scope for improvement considering he is very lightly raced over hurdles and has the excellent Rachel Blackmore on board. He returns here off an eight month break and he could be one to follow over the winter. He beat Pont Aven trained by Willie Mullins who has won twice since.  Rebel Early gets an opening mark of 102 here and that could be quite lenient with question marks over many of the opposition. Solid value here.

Emmet Mullins is a trainer who I have plenty of time for as he is very shrewd with the placing of his horses and even though he has a small select string, he gets plenty of winners. On a line through Ard Abhainn whom I selected in the Mares Listed Bumper on Friday, ROCKET LAD will be very hard to beat here. He was very impressive in a couple of bumpers following on from that and was 4/6 favorite for his debut over hurdles at Cork where he fell when joined and strongly pressed two out. If his confidence hasn’t been affected from that fall he can make amends here and have a very profitable winter campaign.

One of the features on the card and with a nice pot here we seen many of the bigger trainers running some of their better horses. SUINDA is a bit of a speculative selection for team Closutton and it would be no surprise if she ran a very good race. The owners son Aubrey Mc Mahon has ridden her in all her runs bar one where the maestro Ruby Walsh was on board. David Mullins is on board here and she looks like a bit of a plot horse for me as if this race has been the plan for quite a while. She wasn’t beaten too far last time out at Listowel behind Bothar Dubh and she looks each way value here in a very trappy race. Small each way play advised.

The feature of the card and it shows that Jump Racing is well and truly back when you see some well known favorites take their place here. SHATTERED LOVE gets the valuable mares allowance here and catching her fresh could be the best time here. She has a good record fresh and was second to Snow Falcon who reopposes here on her debut last season at Down Royal. Her two runs towards the end of last season where a bit lacklustre following wind surgery but if Gordon Elliott can get her back to any sort of form she looks the value play here. She is a former JLT Novices’ Chase winner at the Cheltenham Festival  and also finished behind Al Boum Photo in the Ryanair Gold Cup Novice at Fairyhouse after that. Al Boum Photo went on to frank the form by winning the Cheltenham Gold Cup so the form has a solid look to it. There is plenty of questions surrounding her and whether she will return to some of her novice form but if she does she will give them plenty to think about. 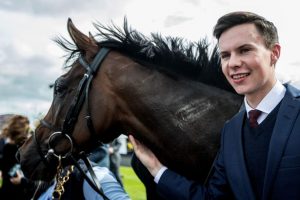 Joseph O’Brien expected to have a strong Saturday.

One of the most competitive races on the card and with cheekpieces on for the first time HIGH SPARROW could give Joseph O’Brien another winner on the day. This horse was extremely well backed last time out from 14/1 to 4/1 but let punters down when finishing midfield at Galway behind Charlie Stout. Galway is the sort of track that some horses can be excused a poor run as the fences in the dip come at you very quick and looking back at the replay you can see the horse struggled to get into a rhythm throughout. This track could suit much better when he will have time between his fences and he could be a different proposition altogether. Solid each way value here with luck in running.

ADVANTAGE POINT is one of the horses that I have had in my tracker for a while now and it is interesting that he begins his life over the larger obstacles here. Edward Harty was very bullish about this horse last season saying that chasing will be his game and he is one horse that he really likes and that he is one for the future. He has won his bumper and maiden hurdle in nice fashion and he could be one to follow for the coming months should he be successful here.  The trainer is adamant that a step up in trip is what he needs so he should be very hard to beat here. Big run expected.