A cracking card in store at Dundalk tonight, 111 runners declared and we also have the Group 3 Mercury Stakes. It is a brilliant renewal and Hit the Bid will try and defend his crown again and fend of the UK challenge who’ve won 4 of the last 5 runnings. Our resident horse racing expert Alan Marron takes you through the 8 races..

The draw could be a massive factor in this race and THE GAME OF LIFE looks to be a fascinating contender from a prime position in stall two. He is a two time course winner and as a four year old who is lightly raced he looks like he might still have improvement to come. He only ran last Friday night when he finished a close up sixth to Trading Point trained by Damien English. This is a drop in grade and he looks the value to exploit it. It was no fluke when he was victorious back in February over a mile at the course when beating Sevenleft and Aussie Valentine. That form has really stood up with Aussie Valentine going on to win a Premier Handicap at the Curragh back in May. Joseph O’Brien has his team in excellent form and I would expect a big run here.

Jessica Harrington arrives here fresh off a double at Punchestown on Wednesday with Conron and Jett and the dual purpose trainer has another big chance here with PERSIAN LION. He was a major eye-catcher for me on his last run as the race didn’t look to be run to suit whatsoever. He was coming off a three month break and arrived there to press the leaders two furlongs out but just didn’t quicken close home and finished fifth. With that run under his belt I think he will be a different proposition here. He gets in here off the same mark of 82 that he raced off the last time and for me the handicapper is giving him a very good chance. Ideally he wants further but with plenty of hold up performers in opposition here Shane Foley might opt to try and make all and set the fractions. Looks solid each way value. My NAP of the night.

This is a very competitive nursery and many lines of maiden form that stand out. One piece of form for me looks head and shoulders above the rest. RED LARK trained by Johnny Murtagh ran an absolute cracker to finish eight in the Tattersalls Ireland Super Sales Stakes worth 300k. She was 50/1 that day was beaten just over three lengths. This is her first foray into handicap company and she looks the one they all have to beat if she handles the surface. I would excuse her the run last time at Cork as it looked like she wasn’t in love with the ground and Colin Keane was easy enough on her inside the final furlong when her chance had gone. Her form prior to the Sales race has been franked also as Auxilia who won the race in Naas went on to finish third to Fancy Blue in the Brownstown Stud Stakes listed race last weekend. Red Lark will be hard to keep out of the frame with luck in running.

Johnny Murtagh and Andrew Slattery could be in line for a quick double here with FESTINA PLENTE who is back at the Co.Louth venue following a close finishing third to She’s A Babe who reopposes here. Festina Plente is better in at the weights with that rival this time around and has every chance of reversing the form. She broke her maiden here and looked to be coming with a good run last time out when her momentum was slightly checked, she was switched right and ran on well. With that run behind her I can see her going close here in a very trappy race. She was impressive at Gowran Park the time before last and she looks like a filly who is in the form of her life. 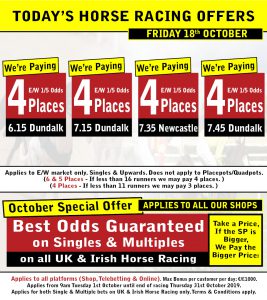 This is somewhat of a speculative selection considering the horse is having his first run on the all weather but his handicap mark has plummeted that much that he is going to have his day very soon and he will be a decent price. COMHAIRGHEADEAS was selected on the previews during the Listowel Festival and he ran a cracker under Declan Mc Donagh to finish fifth after trying to make all. This horse was successful off a mark of 80 back in 2017 and he runs here off a mark of 49 and even with the jockeys claim it will bring it down further. As I mentioned for Listowel he his only a 5yr old but has had plenty of racing. Andrew Slattery is no stranger to success at Dundalk and while this horse could be a double figure price he is one to keep a close eye on for the weeks to come.

Tony Martin looks to hold the ace in the pack for this race with FASCINATING SPIRIT in the colours of Newtown Anner Stud Farm being his contender. Wayne Lordan is on board here after this horse went very close two weeks ago when second to Buzz Killington trained by fellow Meath trainer Noel Meade. Fascinating Spirit travelled on the bit to challenge and got slightly outbattled in the final 150 yards to get beaten a half a length. This looks the perfect chance to get her head in front. This filly is very lightly raced and it looks to me as if Dundalk is her track and she is one to keep on the right side of. She will be very hard to beat for me here.

The trainers from across the water are here in force for a race that they have a very good record in. They have won four of the last five renewals of this race and only Hit The Bid who looks for a repeat success has upset the apple cart in recent times. James Tate is a trainer who I pay close attention to on the all weather and the booking of Chris Hayes for DREAM SHOT suggests to me that he has a very good chance. He has only been seen on the all weather once when he was 1/5 in a novice auction race at Chelmsford in which he duly obliged. It will need to be a decent performance from a two year old to trouble the older sprinters but I think this horse is improving slowly. He ran a very good race when second to A’Ali in the Flying Childers at Doncaster last time out. A’Ali is a very good yardstick in terms of form this season as he won the Norfolk at Royal Ascot and the Prix Robert Papin at Deauville.

Not one of the strongest races to finish the card with many of the runners looking quite exposed. Johnny Levins has booked Colin Keane for his new recruit MY EXCELSA and that looks potentially interesting. This horse formerly trained by George Scott in England was picked up for £6400 at the Newmarket July Sales so he has had a few months to adapt to his new surroundings. Her debut run on the all weather at Kempton showed that there is plenty of ability there. Many of the runners in that race have followed up again since. The one slight negative would be 354 days off the track suggesting that she may have had a few niggles that needed to be looked at. She looks to be the value here and could be a decent price.

For more info on Dundalk tonight, why not check out our new sponsored vlog; Friday Night Racing at Dundalk featuring Thom Malone and Brendan Duke