Alan Marron runs the rule over the penultimate day of the seven-day Harvest Festival at Listowel (first race, 1:55pm)

Alan Marron was back among the winners on Thursday, including the 10/1 shot Getaway Katie Mai and is here to mark your card again at the Listowel Harvest Fetival.

Today’s markets for Listowel can be found here

This wouldn’t be one of the strongest races of the week but there is still plenty of potential on show.

Jim Bolger runs a nice filly here called IVY AVENUE who was a very slow learner on her debut, but once the penny dropped with her, she stayed on well. She should know her job this time around and, at the minute, we can see that the money has started to come for her.

She wouldn’t have much to fear from the opposition and she has a plum position from a low stall. With normal improvement it will be very hard to keep her out of the frame. 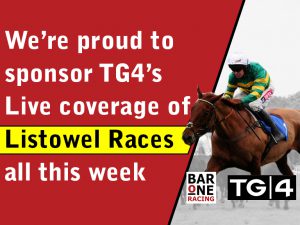 Bar One Racing – proud to be sponsoring with TG4 at Listowel

RATTLING JEWEL is bidding to follow up last year’s win in the race and, looking at his handicap mark, he could be plotted out to do so. His mark has fallen a total of 22lb in just under a year and he returns here off a 9lb lower mark than last year.

Gavin Ryan is on board this time around and he will be claiming 7lb so that lowers the weight even further.

To me this looks to have been a long term objective with this horse and it could be worth paying close attention to him. He has been totally out of form this season and the Listowel air might just bring him back to life.

A speculative selection but he looks too well handicapped to ignore in this race. 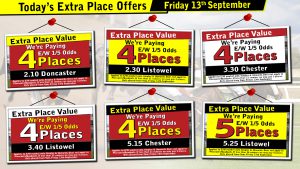 ZARAFSHAN brings some very strong form into this race and, if the application of blinkers works, then he could take the world of beating in a very average-looking maiden.

He finished second to Sir Dragonet, trained by Aidan O Brien, who went on to finish fifth in the Epsom Derby and will contest the St Leger at Doncaster this weekend. That form is head and shoulders above anything else here and he could be a bigger SP than he actually should be.

Watching back his last race, he looks lazy off the bridle and the blinkers could be just what he needs.

Very good chance to give DK Weld a winner.

The booking of Declan McDonogh for the Padraig Roche-trained WAY BACK HOME looks a noteworthy one indeed.

This horse had a very bright start to his National Hunt career last season. It took him a bit of time to break his maiden but then he really impressed when he won a Grade Three Juvenile Hurdle in February and then ran an absolute cracker to finish fourth in the Champion Four Year Old Hurdle at the Punchestown Festival behind the Nicky Henderson-trained Fusil Raffles.

He returns to the level here a completely different animal to the last time we saw him under this code and his handicap mark could be very lenient indeed.

A mark of 63 looks to me as if Padraig Roche will have plenty of options over the coming months with this horse. Solid each-way value here.

The UK raider here for the stable of Martin Todhunter will give them all plenty to think about. MONBEG RIVER has some very solid formlines at Doncaster and Ayr and his handicap mark is one-pound higher than when he was last successful.

This race looks competitive, to say the least, but this horse couldn’t have a better man on his back than Denis O’Regan.  He likes to be prominent in his races and he could be well suited by this track if he gets into a nice rhythm up front.

With no obvious front-runner in the race, he could get his own way and make all. Good chance.

GOLAZO looks a very strong contender to give the alliance of Mullins and Townend another winner.

When he ran at Cork last time, he raced away clear from the front and, for me, his jumping only got worse as he started to get tired. However, he battled on well to be only beaten a length in the end.

I can see him being a little more conservatively ridden here and, no doubt with his hurdling skills brushed up, he should be very hard to beat. He steps up in trip here also so that for me should allow him to get into a nice rhythm and win with his head in his chest.

One to watch for later in the season, too.

ELIPSISM impressed me by the way he travelled and finished out his race at Kilbeggan to suggest he is a big player here with a mandatory penalty.

He has steadily got his act together over hurdles and there looks to be plenty of improvement to come.

His breeding lines have plenty of stamina and, when the others have cried enough, he will be coming into his own.

He won just over three lengths at Kilbeggan last week but was value for more than that margin suggests.

JANET’S CHARM should be very hard to beat here in a weak-looking bumper. She ran well on her debut and looked in need of the experience.  If she has improved off the back of that, one of the opposition will need a very good performance to beat her.

She made most of the running last time and Patrick Mullins could set off in front here also.