On Friday, Alan Marron poured scorn on the notion that Dundalk is a difficult track for punters by providing winners at SPs of 16/1, 11/2 and, his nap, at a well-backed 4/5. In doing so, he continued his already-successful year of winner finding.

Prices on today’s Ayr Gold Cup can be found here

Prices on today’s horse racing can be found here

One of the biggest betting races of the year, today Ayr stages the Ayr Gold Cup, which is the track’s feature flat race at its biggest flat meeting of the season.

The biggest chalenge for many punters this year is finding the potential Group horse in a competitive handicap.

The draw for this race could prove vital and many of the middle stalls were snapped up quickly in the draw for the six-furlong contest.

Stalls 10-20 look to hold most of the pace, with four of the top five in the market drawn there.

The ante-post favourite Buffer Zone, who is trained in Ireland by Ger Lyons, is in stall 21 and that, for me, could be a slight negative at the prices.  Five-year-olds look to have the best record in the race and there are only five of them set to take part.

I will put forward two selections at each-way prices and, hopefully, give us a decent run for our money. 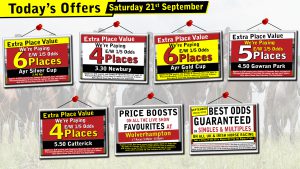 This horse is one of those who will travel very strongly off a fast pace and will be looking for gaps to appear late on.

He has contested some very strong races this season over seven furlongs and even had three runs in Meydan. A fast-run six furlongs could be exactly what he needs. He was very impressive over 6f at Newmarket two runs back when he travelled supremely well and won going away. He stepped up to Listed class last-time out and raced far too keenly and I would nearly ignore that run completely.

He is drawn 15 here and that looks ideal for Paul Mulrennan to sit nicely and get some cover and produce him late with a winning run.

If we take a look at his run at Ascot in the Moet & Chandon International Stakes over 7f we will see that he arrives on the scene travelling very strongly but just doesn’t get home.

In my opinion this horse looks tailor-made for an Ayr Gold Cup and I think he represents some strong each-way value at a double figure price.

Good Effort is aiming for big-race success at Ayr

When the ante-post market opened for this race, Soldier’s Minute was the first horse that shortened in price and has halved in price since.

Keith Dagleish is a dab hand at landing big-field handicaps as he has shown on a couple of occasions at York this season, including with this horse.

He was very impressive at York, when he scooted clear off a fast pace and won going away by three lengths.  He is drawn low here and, while to some people that may look a negative, I think Joe Fanning might be able to slot in and travel away and look for the gaps to come late on.

The addition of a hood – which he will wear for the first time in a race – on this horse could provide the spark he needs after a couple of lacklustre runs since his victory at York.

It looks as though he is fast-ground dependant and he will get that here. He finished down field in the Wokingham and the Stewards’ Cup most recently, but this could be his day in the sun.

His record at Ayr isn’t the strongest but I expect a big run here and he could be one of the surprise packages in the field.

He’ll be hard to keep out of the frame with luck in running.

Keith Dalgleish is no stranger to success in his native Scotland