The Rugby World Cup takes place in Japan and will run from Friday September 20th to Saturday November 2nd.

The tournament was first held in 1987, the year that produced the first of three World Cup wins for New Zealand, their other wins coming in 2011 and 2015.

The ninth Rugby World Cup is arguably the most open World Cup in history, with a number of teams in contention to bring home the Webb Ellis Cup.

Any tier-one nation has the ability to win this year’s World Cup. Each top-tier nation’s chances will be previewed here, beginning with the holders New Zealand. 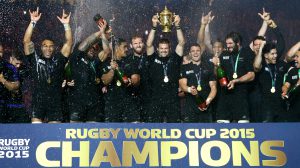 The All Blacks are looking to create history by becoming the first nation to win the World Cup for the third time in a row. However, despite having been the standard bearer of world rugby for the last decade, they do look beatable.

They have won only two of their last five Test Matches, which is almost unthinkable of the once-great team.  They also have an issue at fly half. Who do they start? Beauden Barrett or Richie Mo’unga.

Recently they have been starting Barrett at fullback, despite the fact he is not a fullback. Mo’unga may be the better place-kicker but Barrett has the ability to change a game when he is playing at fly half.

If they continue to play Mo’unga at out-half, they may suffer an early exit at the World Cup due to his inexperience at the top level.  Ultimately, New Zealand is lacking the depth that they used to have and, as a result, I believe they will not make it much further past the quarter-final stage.

There is no value in backing them to win the competition. 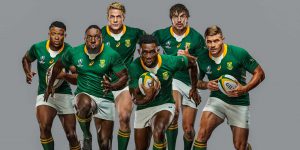 With Rassie Erasmus at the helm, the Springboks have been steered back to being a super power of world rugby. They have gone back to their main strengths, which is using their big forwards to bully their way to victory.

Despite the fact they have big bruising forwards, they have also got great backs.  Faf de Klerk at scrum half and Handre Pollard at fly-half make a great half-back pairing capable of controlling any game.

Out wide they have great pace in the form of Cheslin Kolbe, and at 12/1 he is a great price for top tryscorer in the competition.

The mix of huge forwards and skillful, speedy backs has worked very well so far under Erasmus – they won their first ever rugby championship this year. They are going into this world cup in great form, unbeaten in the rugby championship and with victories over Argentina and Japan.

Another factor that will help South Africa is the fact they have been in Japan since the beginning of September. This may give them an advantage as they will be settled in, unlike the likes of Australia whose travel was delayed due to a typhoon.

Big things are expected from South Africa and their price at 4/1 is very attractive. 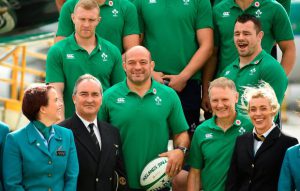 Despite a very disappointing 2019 for Ireland, they enter into this World Cup ranked number 1 in the world.

With a poor Six Nations and a mixed bag of a warm-up campaign, Ireland arrive in Japan less optimistic than they would have had been a year ago. However, they did look sharp in their last warm-up game against Wales.

A few changes were seen to the regular Ireland squad in the Welsh game.  Conan playing at 8 freed up Stander to have more influence at 6; this move gives Ireland more of a physical presence in matches.

Aki and Henshaw also seem to be nailed on to start at centre. This doesn’t come as much of a surprise as it appears that Joe Schmidt is looking to play a big, physical Ireland team. They will need this physicality if they face South Africa in the quarter-finals.

However, shockingly, many fans may rather face New Zealand in the quarter-final, as they don’t appear to be the team that they were four years ago. Ireland has had good fortune against New Zealand recently and would fancy their chances.

However, Ireland does not have the strength-in-depth in key positions to win the competition. In saying that, I do believe that they will get past the quarter-final but, unfortunately, bow out at the semi-final stage.

On a betting front, because of the group Ireland are in, I believe that they will have a few players contesting  for top tryscorer, the obvious one being Jacob Stockdale (at 11/1).

However, a dark horse for top tryscorer is Andrew Conway (at 80/1). He is certain to start against the likes of Samoa and Russia, where he could easily rack up the tries. 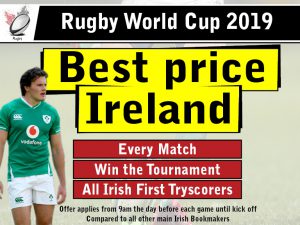 After a good Six Nations campaign and a dominant display in the warm-up games, England enters the World Cup in great form.

They have gone back to the game-plan that won them the World Cup in 2003. They have a big, physical pack,  a solid set-piece and possibly the best line-out operators in the world in the shape of Itoje and Krus.

They often use their big ball carriers like Billy Vunipola , Jamie George and Maro Itoje to get them over the gain line. Once they have the front foot they release their backs and they have raw speed in their backline in the shape of May, Daly and Cokanasiga.

However, with Ford at fly-half, England are beatable. If their big ball carriers struggle to get over the gain line, Ford tends to struggle. Farrell is also a liability if England isn’t on the front foot; he has a tendency to tackle high and, with referees clamping down on high tackles, he may see the sin bin in the latter rounds of the competition.

I do believe that England will go well in this World Cup,  in fact I think they will reach the final, but will then lose to South Africa.

I think an England and South Africa final at 10/1 is a great price. 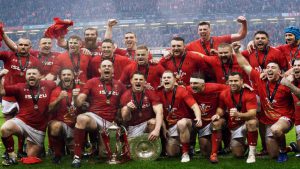 Warren Gatland is leading Wales into his last tournament as their head coach. He has led the Welsh side to great success and the only trophy to have eluded him is the World Cup.

Wales enter the World Cup similar to Ireland, with a mixed bag of form. They won the Grand Slam this year but have won only one of their four warm-up games.

It is important not to read too much into warm-up games, but the squad’s confidence must have taken a hit. However, Wales were dealt a great pool, with only Australia posing any real threat of beating them. They should walk through the group, finishing top, and meet either France or Argentina in the quarter-finals.

The only thing that could stop Wales going far in this competition is their issue at fly-half, with Gareth Anscombe missing the tournament owing to injury, which leaves just Dan Biggar and Rhys Patchell.

If either of these were to get injured it would ultimately end any chance Wales has at the World Cup.

I expect Wales to do well at the World Cup but I can’t see them getting past the semi-finals.