The first piece of silverware is up for grabs in 2019 as defending league cup champions Derry City and treble chasing Dundalk meet in the EA Sports Cup final at the Ryan McBride Brandywell Stadium on Saturday night (live on Eir Sport, 8pm KO).

Derry City defeated Cobh Ramblers 3-1 at this venue last season to lift the trophy and have tasted league cup success more times than any other club (11 times) while manager Declan Devine will be hoping to capture a first trophy as boss since winning the FAI Cup during his previous spell in the hot-seat back in 2012.

As for Devine’s opposite number, Vinny Perth will be hoping to emulate his predecessor Stephen Kenny, who used league cup success to kick-start his Dundalk revolution and with the “Lilywhites” closing in on a fifth league title in six seasons and now into the final four of the FAI cup, a debut season treble for Perth is a very real possibility. 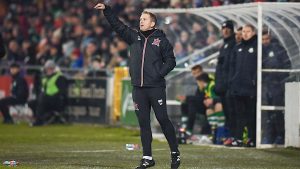 Vinny Perth is seeking his first major trophy as Dundalk boss this weekend.

Derry City started their defence of the EA Sports Cup by defeating First Division outfit Longford Town 3-0 at the Brandywell in round 2 in a fixture that largely featured second string sides. Colchester United loanee Junior (3/1 anytime goal scorer) has proved to be one of the best new arrivals into the League of Ireland this term and the former non-league player in England was on the scoresheet in the win over Longford

Junior may prove to be one of the “Candystripes” main attacking threats on Saturday, having notched against Dundalk in a 2-2 Premier Division draw in July.

Things got tougher for Derry in the quarter-finals as the hosts required extra-time to get past local rivals Finn Harps with both of Derry’s strikes coming via David Parkhouse, who would go on to score four times in a thrilling 4-2 semi-final win at home to Waterford. As you’ll have noticed Derry have played at home in every round of this seasons competition and will have home advantage in Saturday’s final.

Dundalk also opted for a second string for their opening game in this year’s league cup as goals from Georgie Kelly and Dean Jarvis secured a 2-1 win away from home against St.Pat’s. Kelly was on the scoresheet again in the next round as the Donegal native helped dispose of his former club UCD by three goals to one at Oriel Park while Dundalk put six past Bohemians in a semi-final trouncing just a few weeks ago. 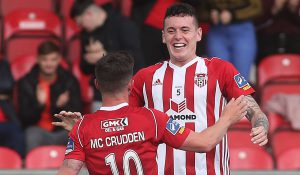 David Parkhouse is the top scorer in this seasons League Cup with 6 goals.

Dundalk’s latest win was in the FAI Cup quarter-finals in Waterford on Monday night, a win that extends the “Lilywhites” unbeaten streak t0 25 domestic matches.

Dan Kelly helped himself to a 33 minute hat-trick in Waterford on Monday and the ex-Bohs man was on the scoresheet in the 3-2 win at the Brandywell (AET) in the FAI Cup back on August 23rd.

Derry City’s David Parkhouse missed that cup tie through suspension and will be eager to add to his top tally of six goals in the league cup so far this season with the Northern Irish under-21 striker 13/5 to score anytime on Saturday and 7/1 to net the games opening goal.

Dundalk and Derry have been familiar foes in 2019 with 2 of the 3 league meetings so far ending in 2-2 draws while Dundalk won early in the season at the Brandywell 2-0 thanks to goals from Sean Murray and the league’s top-scorer Pat Hoban (penalty). As already referenced, Dundalk also prevailed after extra-time in a hell for leather FAI Cup tie at the Ulster venue recently. 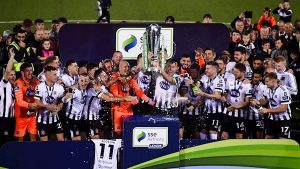 Derry City have shown their ability to be a thorn in the side of last season’s double winners on numerous occasion this term. However, despite such valiant efforts, Derry City have still been unable to get the better of Vinny Perth’s men, who have not lost to Derry since March 13th 2017 when the late great Derry leader Ryan McBride scored in a 3-1 home win.

Everything is pointing towards another tight and fiercely fought contest at the Brandywell on Saturday in front of a maximum crowd (820 away supporters) and having already required extra-time to get past Derry City at this venue in the FAI Cup very recently, Dundalk to win via extra-time at 9/1 looks a fantastic value bet. Dundalk to lift the cup at 7/20 seems about right but if you are looking for something a little juicer in terms of price than Pat Hoban is the man to row in behind with the Galway native 4/1 to score first and 7/5 to net anytime in Saturday’s final.

As you can see from above, I simply can’t look past another Dundalk trophy success on Saturday but by no means am I expecting it to be easy for the “Lilywhites”. Having played out a couple of 2-2 draws with Derry this term, a correct scoreline bet of 2-2 after 90 minutes is certainly worth a punt at 15/1 but if you are simply looking for a small profit creator or something to boost your latest footie acca then my TOP TIP this week is Dundalk to lift the cup at 7/20.