Despite going 4 group D matches unbeaten and sitting top of the EURO 2020 qualification group under returning manager Mick McCarthy, some critics still feel there are questions to answer for the former Ipswich Town boss after some less than convinving performances against minnows Gibraltar and Georgia. A point away to old foes Denmark (1-1) should help squash some of the criticism coming the way of the “Boys in Green” but in truth Thursday’s home tie with Switzerland will go a long way in determining Ireland’s chances of reaching a tournament that will see 4 games hosted in Dublin.

Switzerland are also unbeaten in group D but have only played two games, getting the job done in Tblisi against Georgia (2-0) before playing out a 3-3 thriller with Denmark on home soil in March. The Swiss somehow conceded 3 goals from the 84th minute to the 93rd as Denmark stole a point to the delight of Irish supporters who see these two sides as their biggest threats in Group D. 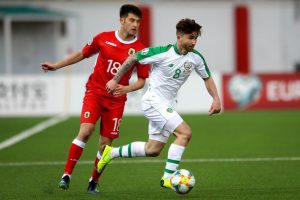 Ireland are struggling for goals at the moment with clean sheets the order of the day for Mick McCarthy and co and the “Boys in Green” did manage that feat in a fairly uninspiring 2-0 home win over Gibraltar last time out. Ireland have kept 4 clean sheets in their last 5 competitive games although this has been against limited opposition.

Seani Maguire has been viewed as the great Irish hope ever since his move to Preston but once more the former Cork City star has been struck down by a very bizarre injury after a loose shot to the face in training caused damage to the strikers eye, ruling him out for a number of weeks.

Club mates Callum Robinson and David McGoldrick have adjusted to life well in the English Premier League but it remains to be seen if McCarthy will deploy the duo together on Thursday with a more measured 4-5-1 formation the more likely selection.

Switzerland really should be arriving in Dublin with two wins from two but that astonishing late collapse will give Ireland fans hope that some sustained pressure on the visitors may cause some defensive jitters but it remains to be seen just how many Ireland supporters will turn out for this crucial qualifier as anti-FAI sentiment continues to swell after numerous off-field scandals and criticism of high ticket prices.

Ireland have not shipped more than one goal in any game since the tail end of the Martin O’Neill reign when a youthful Welsh side put 4 past the side who broke their hearts in Cardiff in that famous World Cup qualifier in 2017 when James McClean brought a nation to its feet.

Such defensive solidity gives Ireland a chance of at least extending their unbeaten start to qualifying before a quick fire away from home double header of action versus Georgia and Switzerland next month.

With Switzerland at home to Gibraltar on Sunday, the Swiss will be viewing this week as a major opportunity to make up some ground on the group leaders. 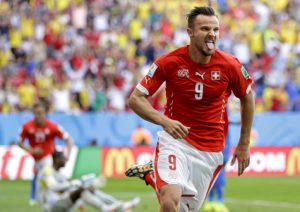 Haris Seferovic has been in red-hot form for the Swiss of late.

Mick McCarthy has reshuffled his squad ahead of hosting Switzerland after being hit by a spate of withdrawals.

James McCarthy, Sean Maguire, Matt Doherty and Keiren Westwood are out of  Thursday’s Euro 2020 qualifier clash at the Aviva Stadium.

As a result, in come Luton Town’s James Collins, Fulham’s Cyrus Christie and goalkeeper Kieran O’Hara, who is on loan at Burton Albion from Manchester United.

While there is no injury news for the visitors to hand, Haris Seferovic has been a key performer for Switzerland recently, scoring five times in his last eight appearances and is 9/2 to score first in Dublin on Thursday, likewise for the final goal of this crucial game and 19/10 to score anytime.

Meanwhile, Ireland were handed a major boost last week when Swiss star Xherdan Shaqiri sensationally asked Vladimir Petkovic NOT to include him in the latest Switzerland squad in order to try and force his way into Jurgen Klopp’s Liverpool starting XI, having been an outside figure ever since his arrival at Anfield.

Ireland v Switzerland is a double the odds first goal scorer match at your number 1 bookmaker!

The most recent meeting between these two nations was the same year Ireland made friends all over France during a successful run to the knockout stages at EURO 2016 with Ireland V Switzerland a precursor to that tournament at the Aviva Stadium in March 2016. The home side came out on top 1-0 thanks to an early Ciaran Clarke goal and that win is just one of 8 against the Swiss. There have been 3 draws and 5 Switzerland victories with the most recent of those not very recent at all with Switzerland winning 2-0 in a EURO qualifier at home in 2003, they also won the visit to Dublin that campaign 2-1.

The last 3 meetings between the countries has only produced 3 goals with one scoreless draw in a 2005 World Cup qualifier in Dublin and given Ireland’s defensive capabilities, a low scoring contest is expected once more this Thursday.

Under 2.5 goals is the main selection at 1/2 but if you’re looking for some value then a draw and under 2.5 match goals at 9/4 is well worth considering. If patriotism is swaying you in the direction of an Irish win then Ireland to win and under 3.5 goals is the bet for you at a very generous 14/5.