It’s the final day of the Galway Festival 2019 and, after a good week, Alan Marron is hoping to close things out in style. Here are his thoughts and selections for Galway on Sunday August 4th.

CHARLE BRUNE has been something of a revelation for his small stable and could give them a big success here. He is a horse who likes to make all the running and Galway is the sort of track that could really suit that.

He has been raised a total of 21lbs in two runs this season, which he won by an aggregate of 31 lengths.

He travels very well in his races and I don’t think that the handicapper has got to grips with him yet. Solid each-way value against the favourite here. 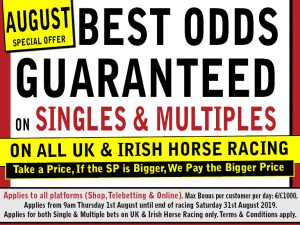 SUINDA has plenty of course experience, with four of her five runs last season coming here.

Aubrey McMahon, who is the owner’s son, is on board here and it could be another winner for the Willie Mullins bandwagon, which has had winners galore this week.

The lack of a recent run may catch Suinda out, but the advantage that she may have is that she comes here fresh.

A very trappy race but she is value at the prices available.

Extra-Place races will be available, once again, with us on the final day of the Galway Festival

This race lacks star quality and it doesn’t stand out to me to be one of the strongest races of the week.

NATURAL POWER is by Slade Power so should be extremely speedy. Robbie Colgan is on board and he has had a winner this week on the Tony Martin-trained Upgraded.

Natural Power ran well on his debut staying on late. A small each-way play is suggested here. If he improves, he could go close with a nice draw in stall three.

SALTONSTALL was very impressive in winning the Colm Quinn BMW Handicap earlier in the week and I don’t see any reason why he couldn’t follow up here under the mandatory penalty. He travelled so strongly through the race earlier in the week suggesting that the drop back in trip here should be in his favour. He is still attractively handicapped so I would rather be with him than against him. 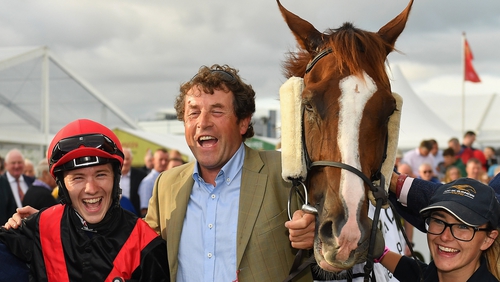 A very interesting chase here and one of my notebook horses makes an appearance.

I have always been of the opinion that SOME NECK will land a decent handicap pot, but errors in his jumping become a big problem for him. The small field this time around could really help and he might be able to get into a rhythm easier.

He has plenty of ability and should go very close off this mark.

He hasn’t been seen since Punchestown but had an entry in the Galway Plate so, if Willie Mullins thought he was ready for the “Plate”, I would be happy to be interested in him here. MY NAP OF THE FINAL DAY.

MEGA MINDY had her stamina stretched last time out over 2m 5f and the drop back to 2m 2f should see her put in a better performance here.

She got up close home to beat From Eden at Limerick, who franked the form over the course earlier in the week when finishing third behind the Willie Mullins-trained Dandy Mag.

The “Shark” Hanlon, trainer of Mega Mindy, loves to have a winner around Galway and this could be the one.

She has only gone up 1lb from her Killarney run last time out and that will most definitely see her competitive here. Big run expected over the shorter distance.

Tony Martin and owner John Breslin have had a fantastic week and the could improve it here with a two-pronged attack on this race.

The bigger-priced of the two runners is the one that I will pay most attention to. ACCLAMATIO is a tricky customer but, on a going day, he would have the beating of these.

He won off a long break back in 2017 so he has to ability to run well fresh. Tony Martin is no better man to get one ready and I would suggest a small each-way play here and maybe a reverse forecast with Upgraded, who is the other John Breslin runner, is the way to go.

This race is tough to gauge, with the Joseph O’Brien-trained Meticulous being a short price.

Father Ted fans can finally have a bet at Galway and go out with a bang with JACK HACKETT being the selection here. He stayed on well to win his bumper in Cork and then ran a poor race behind Macgiloney over hurdles.

He should give us a run for our money at a double-figure price to end the Ballybrit bonaza.