Friday night’s live game on Sky Sports to kick-start game-week 3 in the Premier League sees winless Aston Villa host an Everton side who have claimed 4 points from their opening two matches.

Villa play at home for the second game running but the newly promoted outfit went down 2-1 to Eddie Howe’s Bournmouth at Villa Park last time out.

Ahead of the opening Premier League game of the weekend, Kieran Burke examines both sides’ chances for BarOneRacing.com.

Despite starting life back in the top-flight with back to back defeats, Aston Villa have put in two very respectable efforts against two teams many would consider among the top possession based sides in the Premier League, taking the lead in London before going succumbing to a rampant second-half showing from Tottenham Hotspur (3-1) while the concession of an early penalty last week against Bournemouth meant it was always going to be an uphill struggle for the “Villains”, who eventually lost out 2-1.

John McGinn and Douglas Luiz are the players to have hit the target so far this season for Aston Villa but it’s at the back Dean Smith’s charges will have to tighten up, conceding 5 goals in their two league matches to date.

As for the “Toffees”, Marco Silva’s men are yet to concede a goal this season after a scoreless opening day draw against Crystal Palace away  and a 1-0 triumph over Watford at Goodison Park last time out.

Bernard was the match winner versus the “Hornets” while new signing Moise Kean made his Everton debut with big things expected of the imposing striker, who arrived from Juvents during the recent transfer window.

Given both of these historic old clubs were founding members of the Football League, this is one of the most played out fixtures in the history of English football. The Birmingham and Merseyside based outfits have faced each other no less than 220 times with Villa winning 80 times, Everton 82 and there have been 58 draws.

In terms of Premier League meetings, it is the newly promoted Aston Villa the head to head edge with 18 wins to Everton’s 13 while there have been 17 draws in the 48 EPL meetings. 12 of those Villa wins have come at Villa Park where Everton have only tasted Premier League victories on 4 occasions.

In fact, Aston Villa have won more matches and scored more goals against Everton than they have against any other side in the Premier League, with 18 victories and 68 goals recorded by the Claret & Blue.

While those form figures would give Aston Villa supporters hope of an opening point or points of the Premier League side on Friday night the simple fact is Everton have never been relegated from the Premier League while Aston Villa went down to the Championship for the first time in 2016. Even though the “Villains” have spent big upon their return to the elite level, that is no guarantee for success, as we saw with Fulham last year, while Everton harbor ambitions of breaking into the top-six this term.

Also, Everton have only lost two of their last 15 Premier League matches against Aston Villa (W6, D7, L2), although both of those defeats came at Villa Park and will be seeking a third consecutive clean sheets at the start of a top-flight season for the first time since 1912/13 on Friday night. 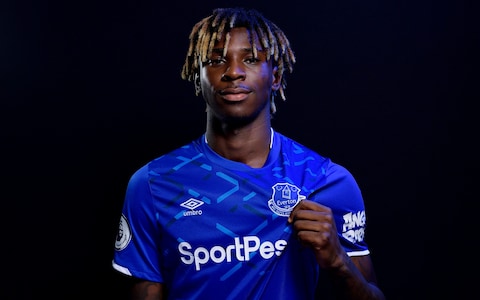 Moise Kean is the latest addition to Everton’s forward-line

If Everton realistically see themselves as top-six contenders this season then these are the sort of games the “Toffees” need to be taking 3 points from and with a solid start to the new campaign defensively, Marco Silva can now start focusing on sharpening his attacking players movement in the final third of the pitch.

The thought of trying to shackle two extremely tricky attackers in Richarlison and Kean would give any defender nightmares and with the likes of  André Gomes and Gylfi Sigurdsson on hand to provide Everton’s front men with some top-class midfield service, this Everton side should have more than enough quality to get past a Premier League newcomer.

With Everton yet to concede this season but only having scored one goal to date, the recommendation is an away win with under 3.5 goals scored at 2/1, although if you’re feeling brave the same outcome but with under 2.5 goals scored is available at double that price (4/1).