BarOneRacing.com’s League of Ireland reporter Kieran Burke looks ahead to the biggest game on the irish football calendar.

The biggest game in Irish football rarely needs any spicing up but tomorrow night’s live match on Eir Sport (8pm KO) between old foes Shamrock Rovers and Bohemians could not have more on the line as both sides could have their respective end of season goals dashed by their biggest rival.

Shamrock Rovers are chasing a first league title since 2011 but trail Dundalk by seven points with time running out to reel in the defending champions while Bohemians sit just three points ahead of Derry City in the battle for European qualification for next season. Simply put, a slip up on Friday night in the derby could prove to be a fatal blow for either side!

Keith Long’s Bohemians have had something of a hoodoo over their cross-city rivals with an eight game unbeaten streak dating back two-years leaving many asking if Shamrock Rovers are suffering from something of a mental block when it comes to this high pressure fixture. 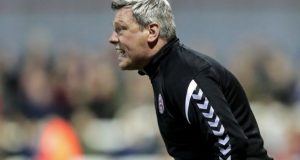 Bohemians boss Keith Long has Europe in sight for the Gypsies.

Shamrock Rovers come into this latest fixture off the back of an excellent run of form and results with the Tallaght outfit unbeaten in their last 9 domestic fixtures (excluding Leinster Senior Cup). Of those 9 matches, 6 have resulted in Rovers wins with the likes of Jack Byrne and Aaron Greene really stepping up to the mark while the return of Graham Burke on loan from Preston should give the “Hoops” the belief they can win any game in a split second thanks to the sheer individual brilliance of the likes of Burke and Byrne, both Irish internationals with the latter included in Mick McCarthy’s latest squad.

Things have gone a little bit south for “Bohs” following their record breaking 10-1 humilation of UCD at Dalymount Park in the league a fortnight ago as the “Gypsies” then bowed out of the League Cup semi-finals 6-1 away to Dundalk before scrapping by First Division Longford Town on penalties in the 2nd round of the FAI Cup last time out.

As already mentioned, Shamrock Rovers are 6/9 from their last 9 domestic games with 3 draws while Bohemians have only won 3 of their last 10 games in all competitions, allowing Derry City to remain in the hunt for that final European place.

Friday’s game takes place at what should be a near capacity Tallaght Stadium and it’s a venue the “Hoops” have excelled at this season with 9 wins from 14 home league matches, only Dundalk and Bohemians have taken 3 points from Tallaght this season with the County Louth side the only team in the division with a better home record (p14, w12, d2).

Bohemians have lost a third of their league games on the road in 2019 (p15, w6, d4, l5) but a Dinny Corcoran goal did give the red & black a win at the home of their biggest rivals already this term.

Friday’s game is also an important one in terms of the golden boot race as Shamrock Rovers Aaron Greene & Bohemians Danny Mandriou are tied on 10 league goals apiece with Dundalk’s Pat Hoban sitting pretty on top of the charts with 14 league strikes.

Danny Mandriou is one of Stephen Kenny’s bright Irish hopes of the future.

The pundits have been left with egg on their face time after time over the last two-years with Shamrock Rovers always heavily fancied ahead of facing their Dublin rivals before failing to overcome the “Gypsies”. In fact, Bohemians will be looking for a fifth consecutive victory against the “Hoops” on Friday night.

Despite Aaron Greene sitting joint second in the league scoring charts, the criticism of the ex-Sligo man is he isn’t clinical enough in front of goal and certainly there is a feeling that when the pressure is on this Rovers team has failed to deliver in the big games.

Stephen Bradley’s men were totally dominant when they hosted Dundalk in a crucial league meeting in Tallaght a couple of months ago but somehow came out on the wrong side of a 1-0 scoreline when Dundalk posted one of their worst performances of the season. Throw in Rovers dreadful record against “Bohs” over the past two-years and there are major question marks for Bradley and his charges to answer and the only way they can do that is by beating Bohemians on Friday to keep the title race alive.

Keith Long’s side haven’t played well since the 10-1 demolition job of UCD but in Andre Wright the “Gypsies” have a centre-forward who is unmarkable on his day and the former non-league man in England could catch the Rovers back four by surprise in what will be his first taste of Irish football’s blockbuster fixture (Wright is 8/1 FGS & 3/1 anytime).

Bohemians have shown their steel when it comes to this fixture time after time and in James Talbot they have a goalkeeper who is simply sensational. The former Sunderland player is always pumped up for these big fixtures and may play a big part in the result again on Friday with the “Bohs” number one absolutely phenomenal in the recent FAI Cup win against Longford Town.

Bohemians have only conceded 21 league goals in 29 outings this term and with the likes of Mandriou, Ward and Wright in attack, the “Gypsies” are set up perfectly to catch their arch foes on the counter attack as we’ve seen numerous times in recent derby games.

As a result, Bohemians draw no bet is the selection advised at 14/5.

An €11 Stake on Derry City, Dundalk, Shelbourne and Longford Town could return €50.29

*Please be aware tonight’s fixture between Finn Harps and St.Pat’s is now postponed due to a waterlogged pitch. Fixture to be played next Friday at 8:00pm.