Willie Mullins can get off to a Fast start at Galway

FAST BUCK was very impressive last time out at Listowel when he absolutely demolished a field of maiden hurdlers very easily by ten lengths.

This race is a natural stepping stone to greater things later in the season and, with the likelihood of him being a short price, I will be very disappointed if he gets beaten.

If he was to be successful here I could see Willie Mullins putting him away for a winter campaign.

ZERO TEN is a very interesting runner here based on his hurdles form and he looks the type of horse who could have a very bright future over fences.

He is a twice course winner over hurdles when winning at this meeting last season and then again in September. It would be nice to see Emmet Mullins – who had a winner on the opening day of this year’s Festival – train a very good horse and this is one he could have aspirations of getting to Cheltenham with in March.

Jessica Harrington has her team in flying form, especially her juvenile fillies, and this could be another winner for the team with the unraced CHASING THE DAWN.

This race has very little form to go on and the market could tell us plenty overnight. She has a nice draw in stall eight so Shane Foley will be able to adopt a handy position and see how good this filly is. Expect a big run.

MUDLAHHIM is a horse that I have been following for a while now and the addition of a visor could make him a very good betting proposition here.

His debut run was second to Magna Grecia,  who went on to win the 2000 Guineas at Newmarket. He ran very flat on his first run of the season this year so I think the blinkers could really spark him into life.

That line of form should be too good for the opposition in this race and should be very hard to beat.

Sheila Lavery has her team in flying form and always loves to get a winner around Galway. MAGNETIC NORTH has gone up a total of 7lbs in his last two runs and further improvement is not out of the equation.

He likes to race prominently and he could stay on very strongly up the hill. His forte seems to be his stamina and, even though this race is competitive, he could be a value each-way selection here.

He has been victorious in a big-field maiden in Leopardstown back at the start of his career so the hustle and bustle of a big field could be what he needs. 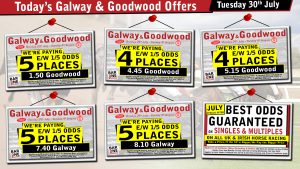 ONE COOL POET had a nice prep run for this race when second in a beginners chase at Tipperary behind Touch Base on the 21st July. He was rated 66 when he last ran on the flat and now returns off a mark of 62.

He finished second over course and distance off a mark of 61 and is now five-pounds higher in the ratings. His chase run a couple of weeks ago will have him spot on and I expect him to go very close.

A very competitive race to finish day two and the Ger Lyons team could have the key to this race. RED STRIKER drops back to seven furlongs from a mile last-time out and his stamina could bring him into the equation .

He is only two-pounds higher since his victory first time out for the Lyons team after arriving from the stable of Sir Michael Stoute. The yard favourite Brendan Brackan has giving the owners some days out in these colours and Red Striker could give them a great day out in the West of Ireland where all the action is happening.