At a time of controversy, disillusionment and uncertainty over the future direction of the game in Ireland, the League of Ireland clubs have once again given domestic football followers a glimmer of hope and pride with Dundalk FC and Shamrock Rovers both on the verge of progression to round 3 of their respective European qualification campaigns.

Both League of Ireland sides trailed after just four minutes of play in their respective 1st leg ties last week but showed amazing character, belief and most importantly of all ability to secure positive results.

Check out our latest markets on Qarabag v Dundalk

While it’s easy to say Shamrock Rovers are perhaps in a slightly more comfortable position than the League of Ireland champions, given the “Hoops” defeated Apollon Limassol 2-1 in Tallaght on Thursday while Dundalk could only secure a 1-1 draw at home to Qarabag, Shamrock Rovers only have to look to Dundalk’s 4-0 hammering against Cypriot opposition last season to realise the job is nowhere near done just yet.

As for Dundalk, conceding such an early away goal in Oriel Park could have proved fatal only for such a spirited second-half rally, as Pat Hoban popped up with a header 10 minutes from time to send the “Lilywhites” to Azerbaijan still in the tie.

Like Rovers’ trip to Cyprus, the conditions for Dundalk are likely to be challenging, but if Vinny Perth’s men can score early then anything is possible.

Ahead of Wednesday’s game in Baku and Thursday’s match in Cyprus, BarOneRacing.com’s League of Ireland expert Kieran Burke has previewed the ties for us.

It was evident from early on last week that Qarabag were a major step up on the Riga side that Dundalk overcame via penalties in round 1 and the last thing the “Lilywhites” needed to do was give their hosts a head start with Sean Hoare’s dreadful back-pass in the opening minutes leading to an away goal for the side from Azerbaijan.

In truth, Qarabag could have been out of sight at the break but, whatever Vinny Perth said to his charges at half-time clearly worked as the champions of Ireland showed champion spirit to secure a vital equaliser from a set-piece as the clock ran down at Oriel Park.

In fact, the “Town” even went on to spurn two more glorious opportunities in the dying stages last week and will have left the County Louth venue feeling as if they left a major opportunity of a 1st leg win behind.

Last year’s 4-0 humbling at the hands of an extremely classy AEK Larnaca team aside, Dundalk’s record on their travels in Europe is very solid indeed, with a win in Estonia (Levadia Tallin) and draws in the likes of Holland (AZ), Poland (Legia Warsaw) and Iceland (FH) all to the “Town’s” credit in recent years.

They always say you can scout and analyze an unfamiliar opponent as much as you like before a game, but it’s only after you face them that you have a true idea of what you are up against, and in Qarabag’s number 17  (Zoubir), Dundalk’s back four now know the level of damage he can cause them if not marshalled correctly.

Keeping Zoubir quiet will prove key to any potential Dundalk success, although from an attacking sense the “Lilywhites” will need to find a way to free up their star asset in Michael Duffy more often than we saw in the 1st leg last week.

Dundalk proved in the second-half last week they can get at this Qarabag side when required and Vinny Perth is sure to stress the importance of a more-composed start in what will be physically testing conditions in Baku.

Dundalk have shown an ability to score goals in Europe away from home in recent years and as a result DUNDALK TO QUALIFY @14/5 is advised. 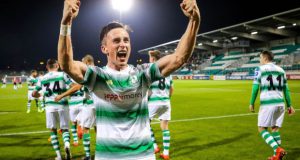 Aaron McEneff has impressed on his debut season at Tallaght Stadium.

Shamrock Rovers’ home form was pointed to in last week’s blog as a reason why the “Hoops” could approach the 1st leg of this tie in a bullish and confident nature. And, while such emotions were perhaps not immediately evident given Limassol took an early lead (although it was a long-distance screamer that Rovers could do little about), the Dubliners soon showed their fighting spirit, hurting the visitors with two set-pieces to secure a lead ahead of Thursday’s 2nd leg.

Again, Jack Byrne and his influence on the ball was also alluded to in last week’s preview and a simple Twitter search of the Irish international’s name will reveal a stream of tweets from supporters, pundits and journalists alike that has rarely been seen in this league before.

While some critics feel Byrne receives over-the-top attention at times. given his history of playing for massive clubs in the UK and in Europe, there is no doubting the former Man City youth player is the key to any potential Rovers success, both domestically and on the continent this season.

Check out our markets on Apollon Limassol v Shamrock Rovers

As mentioned earlier, Dundalk struggled massively with the draining weather conditions in Cyprus last season and that has got to be a concern for Rovers’ boss Stephen Bradley.

However, the big difference is Dundalk went to Cyprus needing to score after a stalemate on home soil in the 1st leg, whereas the “Hoops” head to Cyprus with a narrow advantage, but an advantage all the same.

Dundalk were destroyed on the counter attack in Cyprus last year and perhaps it is Rovers who can play off the back foot against Limassol on Thursday.

With pacey attacking players such as Dan Carr and Aaron Greene available to Bradley, a counter-attacking game and playing a style to suit the conditions, as opposed to trying to play in spite of the conditions, is most definitely the smart choice for the Rovers management team in term of tactics.

Despite last week’s result, it should be remembered that this is a Limassol side that defeated the likes of Marseille and Lazio in the group stages of this tournament last season and will be totally determined not to bow out against a side with lesser-financial resources or European pedigree.

It’s unlikely the “Hoops” will be able to totally shut out the hosts, meaning the League of Ireland side will need to score at least once.

It’s a tough call but BOTH TEAMS TO SCORE AND LIMASSOL TO WIN @14/5 IS THE MATCH TIP while a small stake on CORRECT SCORE: Apollon Limassol 2-1 Shamrock Rovers may be worthwhile @8/1.