Here are our latest League of Ireland-based soccer previews. Dundalk drew 1-1 with Qarabag FK in a smashing match at Oriel Park on Wednesday in the Champions League. Tonight (Thursday) Shamrock Rovers play host to Cypriot side  Apollon Limassol in a Europa League second-round qualifer, previewed below by Kieran Burke. 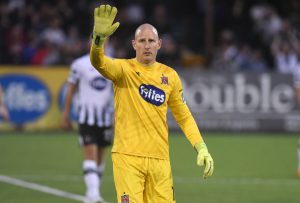 Gary Rogers was the Dundalk hero in Riga.

Dundalk’s progression to round two of the Champions League couldn’t have been more dramatic as the Champions of Ireland squeezed past FC Riga in Latvia on penalties.

Gary Rogers was the hero on the night, following a scoreless two legs of action, as the Dundalk goalkeeper equalled the record for appearances in Europe by a League of Ireland player (41), while the only Irish keeper with more clean sheets in European competition is Shay Given with 23 compared to Rogers haul of 13.

Jubilation and celebrations aside, Vinny Perth and his Dundalk players will know that, despite two extremely solid showings from Rogers and his back four against FC Riga, the “Lilywhites” front players did not do enough despite dominating possession in both matches against the Latvians. Many pundits felt FC Riga would prove to be a tough nut to crack for Dundalk and, while that indeed proved to be the case, the same pundits also said Dundalk had probably received the kindest draw possible in round one.

There is no doubt that Qarabag are a major step up in terms of opponent and a big improvement will be needed at Oriel Park from the hosts on Wednesday if they are to fly to Azerbaijan with any hope of progression into round three, where the “Town” would face the winners of Sutjeska (Montenegro) v APOEL (Cyprus).

Should Dundalk fail in their bid to turn Qarabag over, the “Lilywhites” will await the winners of Slovan Bratislava (Slovakia) and Feronikeli (Kosovo) in round three of the lesser Europa League competition.

DUNDALK V QARABAG FK IS A ‘DOUBLE THE ODDS ON FIRST GOALSCORER BETS’ MATCH WITH US! Usual t&c, and get those bets on prior to kick-off to give yourself a chance of availing of the offer

So, what are we to make of the Azerbaijanis? Well, currently Qarabag FK are out of season, having won their domestic league by eight points back in May, a factor that could very well play into the hands of Dundalk. In saying that, Qarabag showed little signs of rust in overcoming Partizani of Albania in round one, drawing the first leg away from home (0-0) before a comfortable 2-0 victory in Baku.

An interesting fact for Dundalk fans who may be planning the long trip to Azerbaijan is that Qarabag FK  originate from Agdam, a now-ruined ghost town labelled the ‘Hiroshima of Caucasus, but the club have not played in its hometown since 1993 due to the Nagorno-Karabakh war. The club is now based in the capital city Baku, which of course hosted last season’s Europa League final involving Chelsea and Arsenal.

Speaking of Arsenal, Qarabag faced the “Gunners” in the Europa League group stages in 2018, losing home and away to the Londoners (0-3 & 0-1). In fact, Dundalk FC and Qarabag share something in common as both clubs are just the second team from their respective leagues to qualify for the group stages of European competition, although Qarabag have gone one better than any Irish side by reaching the group stages of the UEFA Champions League in the 2017-18 season.

That statistic alone should tell Dundalk followers all they need to know about the step up in grade that the “Lilywhites” face in this round of qualification for the Champions League.

With Qarabag out of season and Dundalk not having played a league game since their 2-2 draw away in Derry on the 5th of July (Dundalk will return to league action on Saturday with a trip to St.Patrick’s Athletic), it is difficult to form any real sort of assertion of the sides’ form ahead of Wednesday’s first-leg at Oriel Park.

However, with the “Town” unbeaten in 16 domestic matches and gaining the confidence of a first-round win over Riga, albeit on penalties, there is no reason why Vinny Perth and co can’t approach Wednesday’s first leg in attack mode.

Going back to that point on approaching Wednesday’s game with an attacking mentality, many feel a lead will be essential heading into next week’s game in Baku.

However, in saying that, not conceding an away goal against Riga proved key in Dundalk’s progression into round two, and finding the balance between hurting the opposition and keeping a clean sheet is the proposition Vinny Perth and his management team will have to battle with during tactical briefings this week.

DUNDALK DRAW NO BET 6/5 – There was a huge sense of disappointment following Dundalk’s home performance against FC Riga and it seems obvious to say a better showing (in an attacking sense) will be required  when Qarabag come to town. However, not conceding an away goal proved crucial in the end for the “Lilywhites” and, as a result, a ‘Draw No Bet’ selection is advised as this could prove to be yet another cagey encounter with so much on the line.

Ireland international, Jack Byrne has been sensational for Shamrock Rovers this season.

Similar to the Dundalk tie, Shamrock Rovers may take heart in the fact that their Cypriot opponents are out of season ahead of Thursday’s Europa League showdown at the Tallaght Stadium.

Finishing 12 points off the eventual champions, Apoel (who Dundalk could face in round three of the Champions League), 3 defeats in Apollon Limassol’s final 6 league matches took a small bit of the shine off what was an otherwise impressive season, winning 17 of 32 league outings.

What was even more impressive than Apollon Limassol’s domestic form last season was their European exploits as the Cypriots won through four qualifying rounds to reach the group stages of the Europa League.

Contained in Limassol’s group were some big names, who the three-time Cypriot champions not only matched but turned over in some very famous instances. Wins over Lazio and Marseille were, amazingly, not enough for Limassol to reach the knockout stages as they finished 3rd in a heavy-hitting group that also contained Eintracht Frankfurt, who Limassol also ran close in two defeats (2-0 & 3-2).

That form alone should be more than enough to bring Rovers back down to earth after their superb victory over SK Brann in the last round.

Any fears of a European hangover were quashed with extreme effect on Sunday as Shamrock Rovers smashed seven past relegation-threatened UCD at the UCD Bowl. Irish international Jack Byrne once again played a central role for the “Hoops” and, if the Cypriots had a scout at the game, he will surely be flagging up the threat posed by the former Manchester City youth-team player.

Similarly to Dundalk’s European tie, there is a feeling that Rovers will need to put their best foot forward in terms of a strong home result as the conditions when Rovers land in Cyprus are likely to be very challenging in terms of the heat, as Dundalk found out in Larnaca last season (losing 4-0 after a scoreless first leg in Oriel Park).

And Rovers’ home form is encouraging, to say the least, ahead of this tie, having claimed 27 points from 13 league matches at the Tallaght Stadium (P13, W8, D3, L2). In fact, only Dundalk have a better record and, having put SK Brann to the sword in Dublin last week, the “Hoops” will approach this round-two tie with confidence on home soil.

Meanwhile, Apollon Limassol overcame Lithuanian opposition in the last round, and comfortably at that with a 6-0 aggregate scoreline. Like many Cypriot sides, Limassol contain a number of overseas names thanks to large investment into the domestic league from private investors.

Argentina, Greece, Spain, France and Switzerland are just some of the nations represented in the Limassol dressing room, again an indication of the sizable task facing Rovers on Thursday night.

Shamrock Rovers’ strong home form combined with the added confidence boost of a 7-0 win on Sunday should have Stephen Bradley’s charges on a high for the arrival of what is some serious European opposition on Thursday night.

Combine those factors with what will be an extremely partisan home faithful and Rovers have every chance of heading to Cyprus with something to play for. In the long-term I’ll be tipping the Cypriots to progress, but for this first leg encounter Shamrock Rovers +1 @4/7 is advised.

*Odds correct at time of publishing*