ICKWORTH looks the value in this race for me based on the form she has shown in two runs this year so far.

She broke her maiden very easily in Dundalk under hands-and-heels riding and then went to The Curragh and demolished a decent field including 2/5 favourite that day, King Neptune. King Neptune franked the form a little bit when finishing second to Siskin in the Marble Hill Stakes last time out.

Trainer Willie McCreery knows the time of day when it comes to landing a decent prize and this filly for me looked very compact and wasn’t stopping last time at the Curragh.

She could be one to keep on the right side of for later in the year also. She’s my nap of day two. 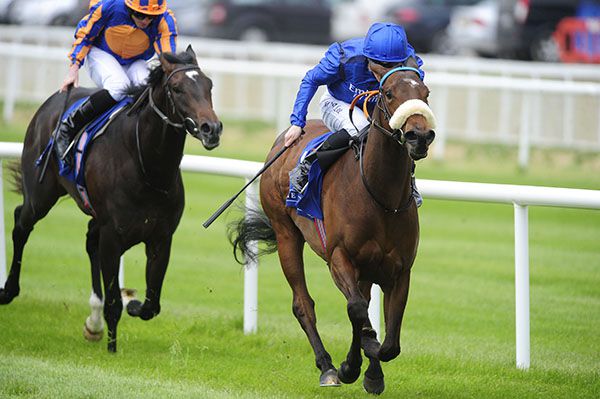 Ickworth wins impressively at The Curragh

Check out our markets for day two of Royal Ascot

For those who followed my Leopardstown preview a couple of weeks ago, you would have seen I was very keen on the chance of EMINENT AUTHORITY in the Listed King George V Cup.

He simply got outpaced on the bend for home behind two decent horses who had more experience, but the positive to take out of it for me was that he closed on them all the way to the line.

The jockey booking of Jamie Spencer really catches the eye and, if he has improved from the last run, he should be thereabouts at a double figure price.

Much of the hype in this race is whether Magical can remain unbeaten this season and I think there is definitely a joker in the pack who could put it up to her.

French raider WALDGEIST showed a devastating turn of foot to beat last year’s Prix Du Jockey Club winner Study Of Man very impressively in the Prix Ganay at Longchamp. He was also very impressive in beating the Godolphin-owned Talismanic in the Prix Foy last season, so his form really stacks up nicely.

He is not ground dependent for me and a nicely-run race here could enable him to show his turn of foot and leave the others in his wake.

He is massive value against the two fillies at the head of the market.

The most-improved mare in this field, RED TEA has a very good chance to give Joseph O’Brien another winner on what will be a very busy week for him.

Back in 2016, when trained by Peter Hiatt, this mare ran off a mark of 67. Three years later she is 40lb higher in the ratings and now rated 107 after some top performances, including last time out at The Curragh when third in the Group 2 Lanwades Stud Stakes.

She won a very competitive handicap the time before and it will take another step up to contend in this race but, when a mare gets into form, who knows when she will stop improving?

She was beaten a head by the forecast favourite I Can Fly last time when they finished second and third, respectively, so the market looks like it underestimates Red Tea.  I am happy to take the double-figure price and give her another chance.

CHECK OUT THESE OFFERS THAT WE HAVE AVAILABLE FOR ROYAL ASCOT ON WEDNESDAY! 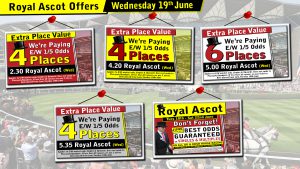 This race is an absolute minefield and to get a horse to finish in the top ten could be an achievement.

The jockey booking of Jamie Spencer for the David Barron-trained CLON COULIS could be very interesting indeed. This horse needs everything to drop right – a fast pace and then the gaps to appear so he can weave his way through and challenge close home.

Ben Curtis give him an absolute masterclass of a ride at Ascot back in July 2018 when he held him in last place and let him travel and dropped him right on the line.

This race looks to have been his aim this season as two runs on the all-weather look to have been fitness boosts to get him up to speed. He won well at Chelmsford and then contended All-Weather Championships day when he never got in contention.

I expect Jamie to be looking for gaps late here and he should go close at a decent price.

Can Clon Coulis make it a win for Yorkshire in the Royal Hunt Cup?

Wesley Ward sends two over to this race from his American base and, from watching the race replays, the most interesting one for me is KARAK.

Like most of the trainer’s horses, they go from the front but this horse was electric. He was green, changed his legs and ran a bit all over the place but absolutely bolted up.

The biggest question is how does the form translate to grass? I am more than happy to take a chance here because, if he has improved from his last run, it could be another Lady Aurelia-style performance and he could make short work of this field.

A REMINDER OF OFFERS THAT ARE AVAILABLE FOR ROYAL ASCOT ON WEDNESDAY!