This is a race that brings together Buveur d’Air, Supasundae and Apple’s Jade, winners of 20 Grade One races between them, plus Melon, Wicklow Brave, who won this race two years ago and was second last year, and two long-priced horses that are themselves Grade One winners, Petit Mouchoir and Summerville Boy.

It is a mouth-watering line-up.

Bar One Racing markets for Punchestown on Thursday are available here

Summerville Boy won the Supreme Novices’ Hurdle at the 2018 Cheltenham Festival but, since sustaining an injury, has not looked the same talent in three subsequent runs.

Likewise with Petit Mouchoir, who won the Irish Champion Hurdle in 2017 but has not won a race since October 2017, which came on his chasing debut at Punchestown. He’s looked a shadow of his former high-class self this season so first-time cheek-pieces would have to have huge powers in them in order for him to win.

Trainer Willie Mullins has won this race seven times in the last nine years, with the other two victories going to Jessica Harrington runners – Jezki (2014) and, last year, Supasundae.

Six of the last eight favourites have won, although last year’s winner was 7/1 and the 2017 winner, Wicklow Brave, who is a big price to win this year, was 12/1.

The 2017 and 2018 Cheltenham Champion Hurdle winner Buveur d’Air has blotted his copybook in three of his last four runs, getting beaten by stable-mate Verdana Blue at Kempton, falling in the Champion Hurdle when bidding to win it for the third-successive year, and being outstayed by Supersundae over 2m4f at Aintree on soft ground last time.

It is a bold and sporting decision for owner JP McManus to bring him to Punchestown, one that is greatly appreciated by racing fans, and, over his favoured trip of 2 miles and on a surface that will not be as testing as it was at Aintree, he looks set to go well. 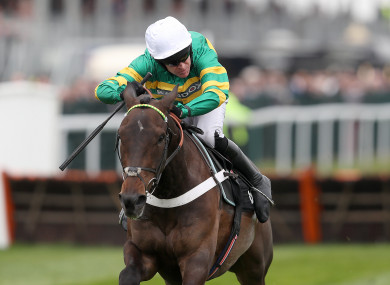 Supersundae is taking on Buveur d’Air again but, by his trainer’s admission, is best at 2m4f, even though he did win this race last year, where he beat Wicklow Brave by 3.25 lengths, and is admirably consistent.

Melon was in contention when falling at the second-last flight in this race last year. He also fell last time (three flights from home) when leading by two lengths at Aintree in the race won by Supersundae.

Apple’s Jade, now a winner of ten Grade One contests, failed to sparkle in the Champion Hurdle at Cheltenham, but her record at the Punchestown Festival is 113. The third came last year in the Mares’ Champion Hurdle when beaten 5.5 lengths into third by Benie des Dieux. With Apple’s Jade not as reliable in the spring as she is in the winter – although the marvellous mare always tries her heart out – Buveur d’Air looks to hold a very good chance. The admirably-consistent Supasundae will always vulnerable at today’s two-mile trip and Melon is struggling to get his head in front this season.

All things considered, Buveur d’Air (7/4 at the time of writing) can pounce late on Apple’s Jade to land this valuable contest, one that will earn the winner €177,000.