Will Reilly previews the Classic Trials at Newbury

We are into Classic Trials season. Leopardstown got the ball rolling on Saturday and we were treated to very good performances from Lady Kaya in the 1,000 Guineas Trials and Broome in the Ballysax Stakes.

Both were recommended bets on this site last week.

Lady Kaya could now be heading to Newmarket for the 1,000 Guineas (May 5th) and Broome will return to Leopardstown for the Derrinstown Derby Derby Trial (May 12th).

This Saturday, April 13th, will see Classic Trials at Newbury – the Fred Darling Stakes for the fillies and the Greenham Stakes for the colts. Both races look like producing very meaningful trials.

Unfortunately, the eye-catching initial entry for the Group 3 Watership Down Stud Greenham Stakes (2:40pm) was strong 2,000 Guineas favourite Too Darn Hot, who is owned by the race sponsor, but he will now miss the race owing to “some heat in a splint bone” and head straight for the 2,000 Guineas.

A view of the impressive main stand at Newbury Racecourse

Despite his absence, the Greenham still looks like being a very good race, with ten set to go to post including the Marcus Tregoning-trained Mohaather (who’ll be ridden by Jim Crowley), who won last season’s Group 3 Horris Hill Stakes at Newbury over the distance of Saturday’s race.

Richard Hannon will be represented by Boitron (Silvestre de Sousa), who’ll be having his first run since a breathing operation) and who finished fourth in last season’s Group 1 Qatar Prix Jean Luc-Lagardere at ParisLongchamp, the promising, unbeaten-in-two Urban Icon (Tom Marquand), and He’Zanarab (Sean Levey), who won two of his four races last year but ended the season by finishing unplaced in a valuable sales race at Doncaster.

Kevin Ryan will be represented by his Group 2 Criterium de Maisons-Laffitte winner, Hello Youmzain (James Doyle), while Tom Dascombe runs Great Scot (Richard Kingscote), who was beaten just a length and a quarter when fifth in the Group 1 Vertem Futurity Trophy Stakes, usually on of the season’s most-informative juvenile races, at Doncaster in October.

Also in the 10-runner field are Ed Vaughan’s impressive Yarmouth winner (in Sept), Magic J (Oisin Murphy), a son of Scat Daddy, and David Elsworth’s No Nonsense (Gerald Mosse), who has won his last two races on the all-weather surface at Kempton.

The Greenham promises to be a very good race and it will be covered by ITV Racing. Their Twitter feed is available here for latest news…

Fifteen fillies have stood their ground for the Group 3 Dubai Duty Free Fred Darling Stakes (2:10pm), which will also be shown on ITV, including Aidan O’Brien’s So Perfect (Wayne Lordan), a daughter of Scat Daddy, who was beaten half-a-length when second in the Group 1 Phoenix Stakes at The Curragh and three-quarters-of-a-length when third in the Group 1 Cheveley Park Stakes at Newmarket last season.

She also finished third in the Breeders’ Cup Juvenile Turf Sprint at Churchill Downs in November, but has yet to race over the distance of Saturday’s race, which is seven furlongs.

Other entries for the race include Richard Hannon’s Star Terms (Tom Marquand), who ended her juvenile campaign with a close third in the Group 1 Qatar Prix Marcel Boussac at ParisLongchamp in October, having finished second in the Group 2 May Hill Stakes at Doncaster the time before.

As with the Greenham, the Fred Darling promises to be an informative contest.

Newbury’s card gets under way at 1:40pm with the Group 3 Dubai Duty Free Finest Surprise Stakes, which is registered as the John Porter Stakes. John Porter, who was based in Kingsclere, which is around seven miles from Newbury, is one of racing’s great trainers, having been responsible for a wealth of big-race winners, including seven that won the Epsom Derby. 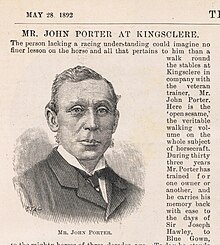