Will Reilly previews the big Premier League clash of the weekend, Liverpool v Tottenham Hotspur, which is due to kick off at 4:30pm

Liverpool have been strong at home this season, winning 16 games, drawing three and losing just once, 2-1 to Chelsea in the EFL Cup.

They appear to have addressed a wobble: they drew five of their seven matches between January 30th and March 3rd (in three of those games they failed to score) but have followed this run with three straight wins – 4-2, 1-3 and 1-2. They are back in form and, just for good measure, they have made it safely through to the quarter-finals of the Champions League.

Their main recent goal threat has come from Sadio Mané, with seven in his last five appearances for the Reds. He also came off the bench for Senegal with 15 minutes remaining in their game against Mali on Tuesday and scored the equaliser in a game Senegal eventually won 2-1.

Sadio Mané has been in fine goal-scoring form for Liverpool

For all that they have made it into the quarter-finals of the Champions League, Tottenham haven’t won in four league games, losing three and drawing one, with the three defeats all coming away from home.

In fact, you have to go back to January 20th to find the last time that they won away from home this season in England (2-1 at Fulham), although they beat Borussia Dortmund 1-0 in Germany on March 5th in the Champions League.

On the upside is the fact that Harry Kane has scored four goals in five games for Spurs since he returned from injury.

Mauricio Pochettino hasn’t managed to beat Liverpool at Anfield in four tries with Spurs – three losses and one draw.

Check out our markets on Liverpool v Tottenham Hotspur

The pressure is on now as, going into the weekend, Man City have eight league games left to play and Liverpool have seven.

By the time of this match, Man City will have played bottom club Fulham (Sat 12:30pm). If they win at Craven Cottage, they will go back to the top of the table by one point. If City win, then a draw against Spurs would keep Liverpool in second place on goal difference, although they will have played a game more.

We are at a crucial point of the season. 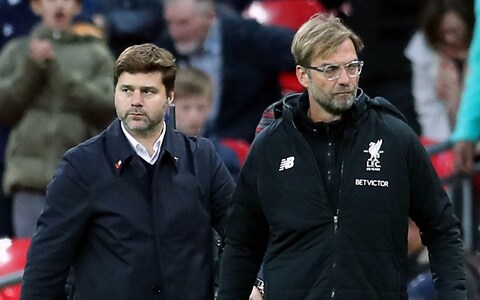 These are anxious times for bosses Mauricio Pochettino and Jurgen Klopp

Trent Alexander-Arnold is struggling with a back injury and may miss out. Jordan Henderson (ankle) is doubtful. Naby Keïta is nursing a “slight knock” but could be available. Xherdan Shaqiri is expected to be available despite a groin injury that kept him out of the latest Euro 2020 qualifiers.

For Spurs, Serge Aurier (hamstring) will be missing, as will Eric Dier (thigh). Harry Winks (hips) might be available.

It is a ‘Double The Odds On First Goalscorer Bets’ match with us.