Spurs have done well to recover from a dip in form following injuries to Harry Kane and Dele Alli and an Asian Cup-enforced absence of Son. Kane and Alli are still absent but Son has returned in the same outstanding form as before he left. He is having an exceptional seasonal.

Three defeats in four matches by Spurs have been met by three-successive league wins, all of them at home, although only one of them has produced a clean sheet. In fact, they have kept only one clean sheet (v Newcastle) in their last seven matches.

Bizarrely, they have not drawn a league match all season, although they have drawn three of their 39 matches this season all told, with two of those coming in the Champions League.

Son has scored a goal in each of the three matches he has played in since his return from the Asian Cup. He remains a key threat to opponents.

Spurs scrambled through their Champions League group, Group B, but they will, no doubt, take the view that, ‘That was then, this is now’. And so they should.

Dortmund have had a superb season. They are five points ahead of Bayern Munich at the top of the Bundesliga table. They have now lost just one of their last 14 matches, although they have drawn their last three games, with scores of 3-3, 1-1 and 3-3.

In their most-recent Bundesliga match, they conceded three goals in the last 15 minutes. In addition, they have kept only one clean sheet in their last eight matches.

They finished top of their Champions League group, Group A, edging out Atletico Madrid on goal difference.

Well-organised and with a style that matches possession with long-ball play, when required, Spurs are a very good side. They also have an excellent play-maker in Christian Eriksen, with the added benefit that he approaches the game in good form. They can mix style with strength and rarely give opponents time to settle into a rhythm.

Dortmund are the Bundesliga’s highest scorers this season, with a 3.67 goals-per-game average, and have scored in all bar three of their fixtures (all comps) so far this season. Their last three league games alone have yielded 14 goals (three draws). As such, they are likely to pack their midfield, with the aim of restricting space for their opponents.

They have had a fine season, although recent blips will give Tottenham cause for encouragement.

Tottenham and Dortmund are both at that ‘Drive for show, putt for dough’ phase of the season when strength of mentality as much as ability will be put to the test. It’s a testing time for both of them.

Spurs – Harry Kane is still out with an ankle injury, although he is said to be making good headway in his recovery. Dele Alli’s hamstring injury will keep him out for all of February. Ben Davies (groin) is unlikely to be available, as is Vincent Janssen (knee), but Eric Dier, who missed the Leicester game on Sunday owing to illness, seems likely to play some part on Wednesday. Erik Lamela also missed Sunday’s game owing to a back injury but, like Dier, is expected to be available against Dortmund.

Dortmund – Marco Reuss, who captains the side, will miss out owing to a thigh injury. Eighteen-year-old Jordan Sancho, who had a fine game in the Bundesliga on Saturday, could well take his place in the side. Lukasz Piszczek is doubtful with a heel injury.

The numbers tell us that this game is unlikely to end scoreless. Both teams to score is on offer at 13/20, which may be a little skinny for many tastes. Tottenham to win and BTTS is 3/1.

Son Heung-min, as mentioned earlier, is in fine form and he is 9/2 to score first (it is a ‘Double The Odds On First Goalscorer Bets’ match with us) and 6/4 to score at anytime. Christian Eriksen at 10/1 is a sporting option. 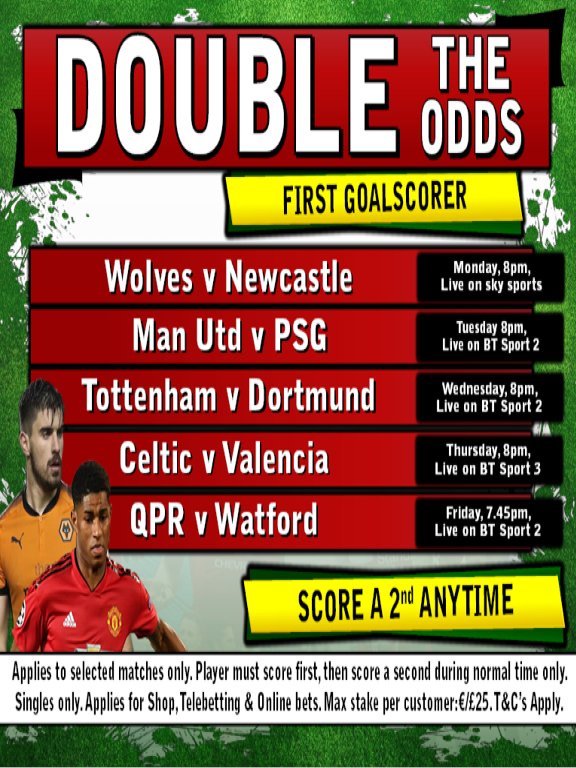