As Maurizio Sarri fumes, the words of Johan Cruyff come to mind. More on this later.

First things first. A place at Wembley on Sunday February 24th is at stake in the second leg of the Carabao Cup semi-final between Chelsea and Tottenham on Thursday night. Tottenham lead 1-0 from the first leg.

How things change. Spurs were looking every inch a challenger for this season’s Premier League title just a few weeks ago, but two defeats in their last four league matches and an ankle injury that is likely to keep leading scorer and talisman Harry Kane out until March has altered things.

Furthermore, Son-Heung-min has been called-up for Asian Cup duty and Spurs have been inactive in the transfer window, so they approach this match with something to prove, not least to those who feel that they are good candidates for falling away when the season’s finishing line comes into sight.

A last-ditch winner against Fulham on Sunday will, though, have given them a lift, although the downside is that Dele Alli picked up a hamstring injury in the match and may miss this Carabao Cup tie.

The bare facts tell us, though, that Tottenham have won 16 of their last 20 matches, have kept nine clean sheets in their last 17 games and have scored 27 goals in their last nine matches, although seven of those came against Tranmere in the FA Cup.

After an excellent start to the season, Chelsea have since endured up-and-down spells and have now lost five of their last 16 matches (winning nine of them). Also, they have drawn just one of their last ten matches and two of their last 15.

Outside of the Europa League, they have failed to score more than two goals in a match in their last 17 games.

Much as they have kept eight clean sheets in their last 17 matches, anyone who witnessed their tepid performance against Arsenal on Saturday would have concerns about how the team is evolving.

That’s alarming, as were Sarri’s reported post-Arsenal match comments: “This defeat was due to our mentality, more than anything else…This is something I can’t accept…This group of players are extremely difficult to motivate.”

Ouch. We await the players’ response.

Kane’s absence in particular will give Chelsea cause for optimism, as will the fact that they were unlucky to come away from Wembley without at least a draw, having dominated the second-half of the ties’ first leg.

Despite this, and the comments made in the form section, we know also that Tottenham are a very good side, one that can play or passing game or adopt a direct approach.

We know also that Chelsea are a good side on their day, although one that is much more a work-in-progress than Spurs. In players like Eden Hazard and Willian, though, they have match-winners in their side. Hazard can pick apart any defence.

Chelsea often dominate the possession stat in their matches but it has become increasingly clear that they struggle for imagination and penetration in the final third of the pitch.

The ‘false number 9’ experiment with Eden Hazard surely has to be ditched, as has the blinkered allegiance to an increasingly ineffective Jorginho.

The words of the great player and coach Johan Cruyff come to mind: ‘Choose the best player for every position, and you’ll end up not just with a strong XI, but with eleven strong 1’s’.

Chelsea have, maybe, two genuinely world-class players – Hazard and Kante – and they are both being played out of position by Maurizio Sarri

As in the first leg, Chelsea may opt to utilise the pace and confidence of Callum Hudson-Odoi. I find myself hoping so as it can only be a positive thing.

Chelsea – New recruit Gonzalo Higuain is in contention to start. Alvaro Morata looks to be on his way to Spain. Victor Moses and Gary Cahill are out of favour. Callum Hudson-Odoi is looking increasingly likely to join Bayern Munich.

Unless Sarri shakes things up, Tottenham could probably close down the game and get a 0-0. However, outside of the Champions League, they haven’t drawn any of their last 20 matches and, although they may adopt a pragmatic approach, they have more than enough about them to cause Chelsea problems, including Moura’s pace.

Will the presence of Higuain galvanise Chelsea? The answer to that will be known early in the match.

If Kante plays in a central role (in place of Jorginho), if Giroud (or Higuain) plays, Hazard  moves to wide (or free-role) position and Hudson-Odoi plays then I feel that Chelsea would hold a much-better chance.

Team selection is key. If Sarri stays stubbornly ‘loyal’ to a system (and players) that is too inflexible, Tottenham will find themselves preparing for a Wembley final against Manchester City on February 24th.

Although they have rarely drawn this season, Tottenham would be happy with one here, so the draw at 3/1 is not a bad option. 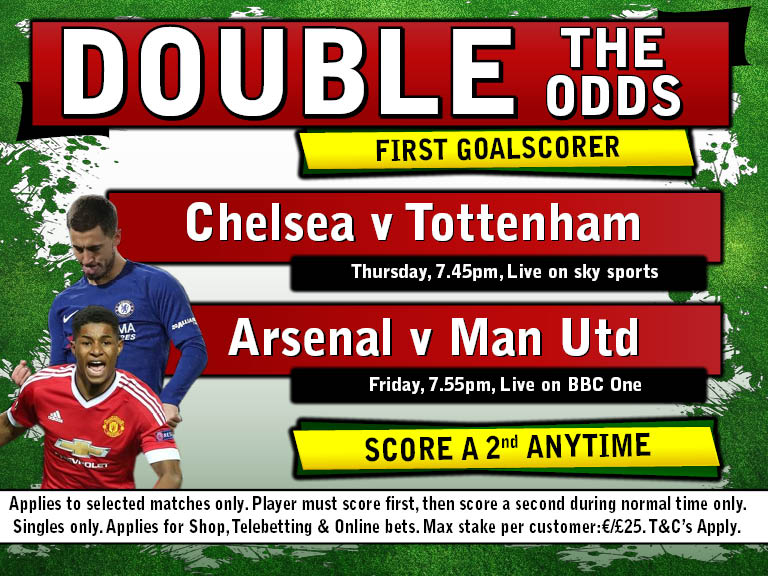